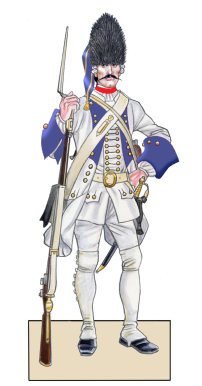 This regiment was raised in the Austrian Netherlands in 1725 from contributions of the Walloon infantry regiments Maldeghem, Lannoy and Julius Marquis de Pancarlier. The new regiment was given to Johann Anton Marquis de Prié-Turinetti. In 1753, he ceded the regiment to Wilhelm Prince von Sachsen-Gotha.

During the War of the Austrian Succession, the regiment took part in the campaigns in Flanders and, on June 27 1743, fought in the battle of Dettingen.

Regimental numbers were introduced only in 1769 when this regiment was designated as "I.R. 30".

In April 1758, when the Comte de Clermont redeployed the French army along the Rhine, the third battalion remained in Wesel. A few days later, this battalion was recalled to reinforce the Austrian army in Bohemia. On October 10, two battalions of the regiment took part in the battle of Hochkirch where they were deployed in the left column (under Duke d'Ursel) of Arenberg's corps on the Austrian right wing to the east of Rodewitz.

In July 1760, a detachment of the regiment formed part of the garrison of Dresden and took part in the defence of Dresden.

Troopers were armed with a musket (Model 1745 for fusiliers, Model 1754 for grenadiers). Grenadiers carried a sabre and a bayonet while fusiliers carried only a bayonet.

Muhsfeldt mention red as the distinctive colour in 1757. Furthermore, he mentions that the uniform was white lined red with red cuffs and that the waistcoat was red...

Until 1760, despite the new regulation of 1755, musicians wore a reversed colour uniform:

From 1760, they wore uniforms identical to those of the privates with swallow nests on the shoulders.