This regiment of dragoons was created in Catalonia on February 13, 1703 for José de Camprodon y San Dionisio, and raised on March 6. It initially counted 500 men, all of them Catalans to the exception of a few officers and sergeants contributed by other units. It was organised in 10 companies, formed in 5 squadrons. Until 1718, it would be designated by the name of its successive colonels: Camprodon, Félix de Marimon, Abarca and Bernardino de Marimon.

The regiment was first reviewed on June 5, 1703 in Barcelona and was officially named “Dragones de Camprodon”

In 1703, during the War of the Spanish Succession (1701-13), the regiment joined the army assembling in Extremadura and took part in the blockade of Arronches, and in the sieges of Portalegre and Castelo de Vide. In 1705, it participated in the unsuccessful siege of Gibraltar and in the occupation of Alcañiz and of the Castle of Morella; in 1706, in the attack on Villareal and in the unsuccessful defence of Murviedro; in 1707, in the siege and capture of Egea, in an attack against the insurgents at Sádaba and in the relief of Verdun and Borja; in 1709, in a surprise attack on an allied camp defending the bridge of Montañana. In 1710, the regiment was transferred to Catalonia and took part in the Battle of Saragossa and in the decisive Combat of Villaviciosa. In 1711, it campaigned in the mountains of Aragon and Catalonia and participated in the capture of the Castle of Arenys and Benasque and in the unsuccessful siege of Cardona. In 1712, it relieved Arenys. In 1713, it campaigned against the Catalan insurgents. In 1714, it took part in the siege and storming of Barcelona.

In 1719, the regiment joined the army operating against the French in Navarra.

In 1720, the regiment was sent to the coast of North Africa to relieve Ceuta which was besieged by the Moors. In 1721, it returned to Spain. In 1723, it was placed in garrison in Saragossa. In 1724, in took up quarters in Villafranca de Panadés, Vendrell and Igualada in Catalonia. In 1728, it was sent to Ampurdan.

In 1732, the regiment took part in the reconquest of Oran on the coast of North Africa. It returned to Spain the same year and immediately embarked for Majorca. In 1734, it returned to the continent and took up quarters in Villafranca de Panadés in Catalonia. In 1736, it was transferred to Aragon.

In 1748, after the Treaty of Aix-la-Chapelle, the regiment returned to Catalonia

In 1762, the regiment joined the Army of Castile for the planned invasion of Portugal. The army concentrated at Zamora, the regiment was allocated to the Reserve. In the first days of May, the Reserve crossed the Portuguese border and marched on Brandilanes. To extend the line of battle, the regiment was posted on the left wing of the second line. On July 8, it retired to Ciudad Rodrigo. On October 31, it took up cantonments at Malpartida. 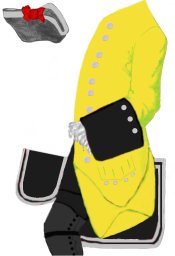 Colonel standard: white field carrying the Virgin of Montserrat on one face and the Royal Arms on the other.

Ordonnance standard (since 1733): crimson field carrying Royal Arms on one face, the other face wore a mountain with a few destroyed houses on its slope and the castle of Sagunto on its summit with a naked arm carrying a trumpet sallying from the castle. This central scene was surmounted by the motto “Sagunto Dat Nomini Nomen” above which a sun dissipating clouds with the motto “Obstantia Solret”. On April 9 1748, as a reward for the capture of Austrian standards at the battle of Campo Santo, the word “Sagunto” was suppressed from the motto and a lion sleeping on six standards was added at the foot of the mountain with the motto “Leonis Praeda Sagunti”.