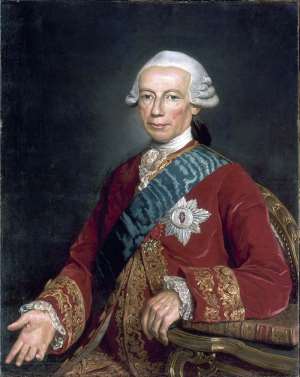 Claude-Louis was born at the Castle of Vertamboz near Lons-le-Saunier in a noble and poor family.

Claude-Louis was educated at Jesuit schools and initially intended to enter priesthood before deciding for a military career. He then bought a patent of sub-officer. According to gossips, he had to leave France after a duel and entered successively in the Palatine, Austrian (where he served as captain in the army of Prince Eugene of Savoy against the Turks) and Bavarian services (where he became colonel).

During the War of the Austrian Succession, Saint-Germain served in the Army of the Elector of Bavaria and disinguished himself on the battlefield. He was promoted maréchal de camp. At the death of Charles VII of Bavaria in 1745, he served briefly in the Prussian Army before joining the Maréchal de Saxe in the Netherlands, distinguishing himself in the battles of Rocoux (October 11, 1746) and Lauffeld (July 2, 1747).

In 1756, at the outbreak of the Seven Years' War, Saint-Germain was promoted lieutenant-general.

In April 1757, during the preparatory operations for the invasion of Hanover, Lieutenant-General Saint-Germain commanded the newly occupied Fortress of Wesel. At the head of his corps, he took position on the Lippe and advanced up to Hamm. By the end of the month he made himself master of Lippstadt. In mid-June, he accompanied the Prince de Soubise in Versailles to discuss a plan of action to counter Frederick's recent successes in Bohemia. Soubise received command of the French army destined to proceed, along with the [[Reichsarmee], to the reconquest of Saxony. In October, Saint-Germain received command of a corps for these operations. On November 5, in the disastrous Battle of Rossbach, Saint-Germain was at the head of a corps of cavalry initially deployed between Schortau and Almsdorf. When Soubise's main body was surprised and routed by the Prussians, Saint-Germain tried to cover the retreat but got broken by Mayer's troops.

In February 1758, during the Allied winter offensive in western Germany, Saint-Germain replaced Broglie as commander in Bremen. He then sent M. de Chabo to Hoya to organise the defence of the place. When he heard that Hoya had fallen and the Ferdinand of Brunswick was advancing on Bremen, he evacuated the town and retreated towards Osnabrück by Bassum, Wildeshausen, Vechta and Vörden. During this retreat, his troops had lost most of their tents and baggage. In March, Saint-Germain resumed his retreat towards Herford and effected a junction with Clermont's Main Army. On June 15, during the Allied campaign on the west bank of the Rhine, Saint-Germain was sent to take possession of the post of Krefeld. On June 21, facing superior Allied forces, Saint-Germain decamped from Krefeld and marched towards Anrath where it made a junction with Clermont’s Army. On June 23, at the Battle of Krefeld, Saint-Germain's Corps bore the brunt of the fighting. All on its own, without being reinforced, this corps fought for almost three hours defending the crossing of the ditch and the possession of the hamlets. Saint-Germain, after sustaining heavy casualties, finally retired from the wood. His retreat was covered by the 48 French squadrons of the left wing In September, during the French offensive in Westphalia, Saint-Germain was detached from the French Main Army with 4 brigades and marched to Castrop.

In 1758, in his memoirs, he denouned the weakness of the French military system.

In April 1759, Saint-Germain was at the head of a corps of consisted of 14 battalions and 4 squadrons posted on the Main River. On April 13, he arrived too late to take part in the victorious Battle of Bergen. In July, he marched from Bielefeld on Hameln to prevent the Allied garrison of this place from harassing the French convoys coming from Kassel by Paderborn and Herford. On August 1, at the Battle of Minden, he was at the head of the infantry division deployed on the right wing of the second line of Contades' Army. In August, his corps covered the retreat of the French Army.

For the campaign in western Germany, Saint-Germain received command of the Army of the Lower Rhine. In June, he received order from Broglie to join him a Corbach for an offensive. On July 10, in the Combat of Corbach, the Hereditary Prince of Brunswick made a desperate attempt against Saint-Germain to prevent the junction of the two French armies. On July 20, Saint-Germain resigned from his command of the French Army of the Lower Rhine, being replaced by the Chevalier de Muy.

Saint-Germain later accepted the grade of maréchal de camp in the Danis Army as proposed by King Frederick V.

In 1762, Saint-Germain was put in charge of the reorganisation of the Danish Army.

In 1766, at the death of King Frederick V, Saint-Germain returned to France where he bought a small estate in Alsace, near Lauterbach and devoted his time to religion and farming.

In 1775, a financial crisis let Saint-Germain without any fortune. He was then introduced to the French Court by Turgot and Malesherbes and appointed Ministry of War on October 25. He made his best to reduce the number of officers and to establish order and regularity in the service. He also recalled General de Gribeauval, then in disgrace, to reorganise field artillery. However, his attempts to introduce Prussian military discipline in the French Army met with such an opposition that he resigned on September 23 1777 and was replaced by the Prince de Montbarrey. Saint-Germain accepted a pension of 40,000 livres from the king.

On January 15 1778, Saint-Germain died in his of the Arsenal in Paris.

Saint-Germain's ideas and methods, although much decried when first published, were later reintroduced and exerted a strong influence upon the Revolutionary French Army.