This dragoon regiment was created in 1725 by combining the two Walloon regiments: Westerloo and Ferdinand de Ligne. The latter had served at the sieges of the fortresses of Lille and Le Quesnoy during the War of the Spanish Succession.

During the War of the Polish Succession, the regiment made the campaigns on the Rhine in 1734 and 1735 as part of the Army of Prince Eugène de Savoie.

On February 1 1758, the new proprietor of the regiment, Christian Philipp Fürst zu Löwenstein-Wertheim, received the authorisation to raise 12 additional companies of light dragoons (the Jung-Löwenstein Light Dragoons) which were initially attached to the present regiment even though they had their own staff and their own commander.

In 1760, the Saint-Ignon regiment was also transformed into a Chevauxlegers Regiment.

In 1765, the regiment was reinstated as a Dragoon Regiment.

In June 1756, at the beginning of the war, the regiment was stationed in the Netherlands and counted about 1,000 men and 1,000 horses. In December, it marched towards Bohemia through Germany.

In February 1757, the regiment reached Bohemia. During the months of March, April and May, it distinguished itself in various small and large engagements. On June 15, it was with Field-Marshal Count Daun's army at the camp of Planian. On June 18, it fought in the Battle of Kolin with extraordinary courage. It was deployed in the second line of the cavalry right wing in O'Donell's Division. As the right wing of the Austrian army threatened the Prussians and more cuirassier regiments were used to break the Prussian infantry squares and were repeatedly thrown back by the incredible resistance of the Prussian infantry, Colonel Count Thiennes, commander of the regiment, received Daun's authorisation to launch an attack with his dragoons. Daun would have said to Thiennes “Mais vous ne ferez pas grand chose avec vos blancs becs.” (but you won't accomplish much with your greenhorns) and Thiennes would have reported these words to his dragoons. The attack completely succeeded and decided of the outcome of the battle to the advantage of the Austrian army. Count Thiennes and his officers fought bravely at the head of their unit. The losses of the regiment were important, more than 500 dragoons remained on the field with several of their officers among which Ficquelmont and Aspremont. Several others died of their wounds. In a certain squadron all officers were killed or wounded and Corporal Pforzheim had to take command. He did it with such distinction that he was promoted lieutenant on the battlefield. In memory of this bloody and glorious day, the regiment received from Empress Maria Theresa the strange privilege to wear no mustach (blanc bec meaning “beardless”). The grateful empress sent four standards that she personally embroidered with scenes depicting the Battle of Kolin. On November 22, the regiment took part in the Battle of Breslau where it was deployed in Benedikt Daun's Brigade in the second line of the right wing under Prince Esterházy. On December 5 at the Battle of Leuthen, the regiment was deployed in Daun's Brigade in the second line of the cavalry right wing under General Lucchesi. In December, after the terrible defeat of Leuthen, it retired from Silesia and took its winter-quarters in Chrast (unknown location) in Bohemia.

At the beginning of 1758, the regiment suffered additional losses from sickness. In July, it marched to the camp of Olmütz. By August 2, the regiment served in the first line of the Austrian Main Army under the command of Daun near Jaromirs. Daun was following up the Prussian army retiring through Bohemia after the failure of the Prussian invasion of Moravia. The regiment then marched to Saxony where it once more fought with distinction at Stolpen. In October it fought at the Battle of Hochkirch where it was deployed in Loudon's Corps, to the southwest of Hochkirch. When Forcade Infantry tried to come to the rescue of the struggling grenadiers deployed on the right wing of the Prussian positions, the regiment attacked them in rear and overwhelmed them. At the end of the battle, Colonel Count Thiennes, the courageous commander of the regiment, remained on the field with several of his officers and troopers.

In July 1759, the regiment was in Silesia where, under Feldmarshall Lieutenant Loudon, it took part in the combat of Freiberg on July 22. On November 20, 4 squadrons of the regiment took part in the Battle of Maxen where they were attached to Brentano's Corps initially posted at Röhrsdorf, 5 km north of Maxen, where they demonstrated once more their bravery and suffered heavy casualties.

In 1760, the regiment operated in Moravia and Hungary, taking part in the engagement of Skalitz and successfully escorting a food supply convoy through enemy occupied territory. On November 3, the day of the Battle of Torgau, a large part of the regiment was encircled and captured in a wood by the Prussians. After its exchange, the regiment was immediately assigned to advanced posts.

In 1761, 400 men of the regiment took part in an attack on Bülow's detachment near Hartmannsdorf in Silesia.

In March 1763, the regiment left Bohemia and returned to the Netherlands where it took its quarters in Ghent and Mons.

A decree of 1757 specified that all dragoon regiments should now wear dark blue coats. The regiment had begun to implement the change. At Kolin, most of its troopers still wore the green uniform but some wore the blue one. After the defeat of Leuthen the standardisation of the uniforms was soon abandoned and the regiment retained its green uniforms throughout the war. 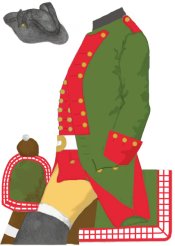 Raspe shows green shoulder straps and does not illustrate any button on the cuffs.

In 1760, when the unit became a Chevauleger Regiment. The headgear was probably changed to a casquet for the troopers while officers retained the tricorne as illustrated in the Bautzen Manuscript. This casquet was similar to the one worn by Austrian Jägers.

Leib Standard: no information available yet

Regimental Standard (these are the four standards given to the regiment by Maria Theresa after the battle of Kolin in 1757): Swallow tailed pennant with a flagpole striped in black and yellow.