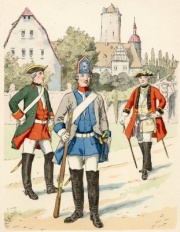 The Uhlanen were maintained by the Polish Commonwealth and hired into Saxon service. They participated in all campaigns from 1757 onwards. Initially with the Austrian armies, later on with the Reichsarmee in Saxony. After the death of King August III, they were returned to Poland. Two Pulks were kept on Warsaw's provisions budget in March 1757. Each Pulk had 6 Hoffahnen ("court-banners", roughly equivalent to a squadron), 1 banner counting 75 men. They were especially recruited in Lithuania and from Tartars. It seems that their tactical role was to scout and skirmish in support of the Saxon Chevaulegers.

Michael Zahn and Dr. Sascha Möbius for suggesting additional books to add to the present section