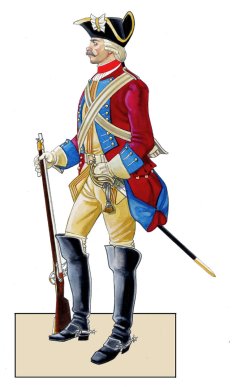 Trabante of the Garde du Corps between 1735 and 1738 - Copyright: Franco Saudelli

The history and origin of this unit are closely linked with the pride and glamour of the ancient lineage of the Saxon royal house. Claiming the origin of this regiment as far back as to the ages of the crusaders – more ancient then the annals of the French Maison du Roi – was the intention, and done deliberately, however true, or not.

According to some, but unconfirmed accounts, the forming of this Garde could be traced back into very distant ages, erstwhile forming as Kreuzritter (crusaders). In 1620 the unit formed a Hoffahne (Court-Banner). In 1631, it was designated as the Leibkompagnie Einspänniger. In 1635, the unit was reorganised in a 1st and a 2nd Leibkompagnie. In 1644, it was renamed Leibeskadron Einspänniger. In 1648, the unit once more adopted the title of Leibkompagnie Einspänniger. Thereafter in 1671, it consisted of one Kompagnie Einspänniger, 1 Kompagnie Kroaten (Croats), and 1 Kompagnie Dragoner being now entitled Deutsche Leibgarde zu Roß. In 1681, the unit became known as the Leibtrabantengarde zu Pferde. In 1686, its name changed again to Gardetrabanten zu Roß. In 1692, it became the Gardedukorps; in 1693, the Leibgardetrabanten zu Roß; in 1699, the Leibgarde zu Pferde; in 1701, the Trabantengarde zu Roß.

(*)Grandmusketärs counted 165 men and had been raised in February 1699 by general count Löwenhaupt. Not to be confused with the Grandmusketärs in the camp of Zeithayn, also counting 165 men in 2 coys, raised in July 1730 by the crown sword-bearer Fürst Lubomirski. They had been send back to Poland and financed by it's treasure until their reduction.

During the 17th century, the Gardedukorps took part in all campaigns of the Saxon army. In 1683, it was present at the relief of Vienna, along with Elector Johann George III. and IV. at the Rhine. Under Augustus II., it fought in Hungary and Poland.

Durin the War of the Spanish Succession, in 1704, the Gardedukorps formed in 4 corps: 1st Trabanten, 2nd Karabiniers, 3rd Grenadiers zu Pferde, and 4th Dragoner under the command of General Count Flemming and the generals v. Jordan, v. Reichenau, and count Tiefenhausen, commanding en second. Each corps comprised 3 brigades whose commanders were either generals or Polish grandees. However, a few years later, this organisation was changed in favour of squadrons and companies.

During the War of the Polish Succession, in 1733, the Gardedukorps took part in the campaign in Pomerania. From 1733 to 1735, it campaigned in Poland.

In 1756 this regiment consisted of 8 companies in 4 squadrons for a total of some 649 men.

After the Seven Years' War, in 1764, only one squadron of the Gardedukorps was retained, the six other squadrons were distributed among the re-raised cuirassiers regiments to serve as carabinier companies.

At the end of August 1756, when Frederick II invaded Saxony, the regiment retired to Pirna with the rest of the Saxon army. At Pirna, the regiment was deployed on the right wing under von Arnim, as part of von Rechenberg's Brigade. The Prussians blockaded the Saxon army in Pirna from September 9 until October 15 when the Saxons finally had to surrender. The Saxon Gardedukorps was then forcibly incorporated into the Prussian Garde du Corps. However, most of the men absconded this service.

In 1757, the men who had deserted the Prussian service rallied in Hungary.

In 1761 a new cavalry regiment of 4 squadrons in 8 companies was raised from men of the former Gardedukorps as well as from the other cuirassier regiments. 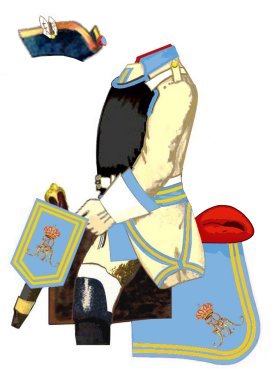 Garde du Corps Musicians - Source: Ibrahim90 from a Not By Appointment template 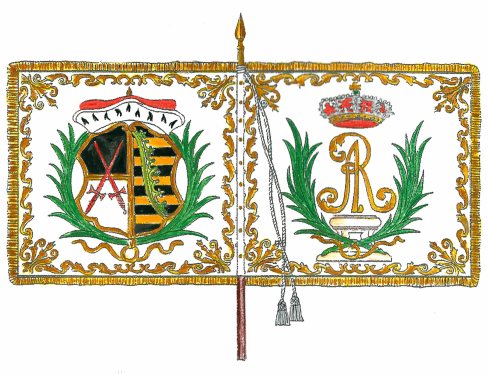 Siegbert Wagner, A manuscript of 1745 describing the Saxon army