In 1681, a small number of Ingenieure (Engineers) were present in the first Etat of the Saxon standing Army since his creation.

During the War of the Spanish Succession, in 1702, unlike the other technical troops (miners, pontoniers) under the command of the Kommandanten of the Artillery, Engineers depended directly from the General Headquarters. On May 9 1705, Jean de Bodt ( a French, born in Paris in 1670, died in 1745), a well-regarded architect, previously in Prussian service, received the commission of Kommandeur (Commander) of the Corps. He obtained the patent of colonel only in 1706. In 1712, the Engineer Corps, that was responsible for the construction and maintenance of the fortresses, was officially named Ingenieurkorps.

During the War of the Austrian Succession, in 1742, an Ingenieurakademie (academy) was created to prepare future officers of the Corps. It was merged with the Artillerieakademie only in 1816. In 1743, the Corps was divided in two brigades, designed as: Hausbrigade (Home-brigade) assigned to the maintenance and construction of military and civil buildings and fortification (like Torgau); and the Feldbrigade (Field-brigade) assigned to field service on campaign (field defences) and to the production of maps. In 1745, at the end of the Second Silesian War , the corps suffered a reduction.

In 1763, at the end of the Seven Years' War, the Corps was re-raised with a Stab (command) of two brigades:

The cut of uniforms of the Ingenieurskorps was very close to that of the Artillery. Between 1728 and 1730 the Artillery Corps was entirely reorganized like the group of so-called “Technical troops”.

Since 1717 the field of the coat was a medium green. This was an intermediate nuance carefully chosen to differentiate the Saxon artillery from the Russian who was dressed with coat of a very dark (almost black) green. The facing colour on the cuffs, collar and turnbacks was red. This combination of colours lasted unchanged until 1914. The colour of metal fittings and lace was silver. 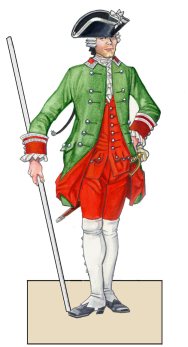 Dr. Marco Pagan for the initial version of this article and Franco Saudelli for the accompanying plate.