This Freikorps was raised in 1758. It originally numbered 421 men and consisted of:

In 1759, the cabariniers were increased to 300 men and organised in 4 troops. The unit now consisted of:

In 1761, the unit was increased and reorganised:

The Freikorps' Inhaber was:

The unit was disbanded at the end of the war.

Throughout the war, the regiment was involved in the Petite Guerre in the western theatre of operation.

On May 26 1758, this newly raised unit was part of Wangenheim's Corps encamped at Dorsten. On May 31, this corps accompanied Ferdinand of Brunswick in his offensive on the west bank of the Rhine. During the night of May 29 to 30, Wangenheim sent a small detachment under the command of Scheiter from Duisburg across the Rhine. Scheiter attacked the quarters of a battalion of Cambrésis Infanterie at Homberg and Essenberg and put them to flight. Scheiter's Corps also repulsed 2 bns of Navarre Infanterie. During this raid, they captured five 6-pdr guns and the new uniforms of Navarre. Scheiter then repassed the Rhine. On June 23, the unit was present at the Battle of Krefeld where it was deployed on the left wing under the command of Lieutenant-General von Spörcken, but it does not seem to have been involved in any engagement. On June 26, Scheiter recrossed the Rhine to blockade Düsseldorf. On June 27, Wangenheim and his corps got order to attack the French in Düsseldorf. To support this attack, Scheither and his men interrupted the French communication with Wesel and Kölln. From August 12, Ferdinand started collecting his troops at Coesfeld where the British troops joined his army on August 21. On August 29, he shifted the main part of his army to Duelmen (including Scheither and his men). September was a period of small skirmishes where the Hanoverians were more successful than the French, especially Luckner and Scheither. On September 6, Scheither and his carabiniers swam across the Lippe near Gartrop (between Dorsten and Wesel) where the Lippe was so deep and wide that no one would have expected such an attack. A secret note had informed them about a French transport coming from Wesel to Recklinghausen (where Contades and the main part of his army were lying). The escort of the convoy was not very watchful, and although it was numerically superior, it was surprised and routed by Scheither's men, many being killed or taken prisoners. Scheither and his carabiniers destroyed everything of the convoy they could not take away, plundered the traders who followed the convoy and drove away a flock of oxen. Scheither also intercepted two French couriers with dispatches, then crossed the river again swimming with all prisoners, oxen and captured horses. He did not lose a single man. In December, when the Allied army took its winter-quarters in Westphalia, the unit was quartered in a chain of posts between Stadt Loon, Geschen, Loburg, Coesfeld, Lette, Dülmen and Ham.

In June 1759, the corps was part of the main Allied army under the command of Duke Ferdinand of Brunswick.

By the end of January 1760, the unit was attached to the Allied army of Ferdinand of Brunswick. On the night of June 21 to 22, the unit arrived at Recklinghausen. In August, the unit took part in several skirmishes on the Lower Rhine. On August 21, French light troops attacked Scheither's Corps but were repulsed. On September 7, the unit was part of Major Bülow's detachment who advanced on the Upper Eder to threaten Broglie's communication with the Main. The detachment was sent forward to Butzbach where they captured 2 coys of Cavalerie Liégeoise along with 2 standards. During the same raid, the detachment destroyed about 250 wagons of flour at Grünberg and Hungen. 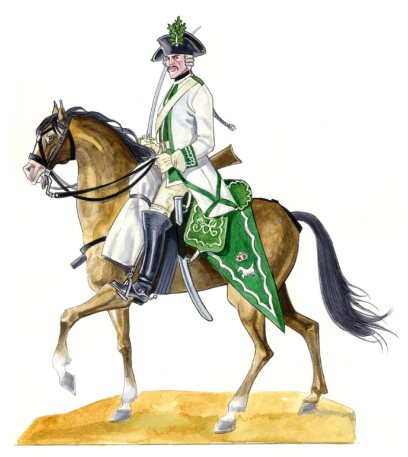 The carabiniers were armed with a rifle and a sabre. Rank and file were armed with a musket and a sword.

N. B.: from 1761, most jägers formed a grenadier company but the 60 most experienced huntsmen formed a small jäger company and were armed with rifles.

The Officiers carried gold lace on the vest, cuffs and coat pockets.

Atwood, Rodney: The Hessians. Mercenaries from Hessen-Kassel in the American Revolution, Cambridge 1980

Karola Sauerländer for details on the campaign of 1758