In 1716, the regiment took part to the campaign against the Turks . It was at the battle of Peterwardein and at the siege of Temesvar. In 1717, during the siege of Belgrad it was deployed beyond the Sava River. On July 17 1717, it distinguished itself when the Janissaries attacked the unfinished camp of prince Eugen, repulsing their assault. After this battle, lieutenant-colonel Miglio was promoted colonel of the regiment for his courageous behaviour. On August 10, of the same year, the regiment suffered heavy losses: 6 officers were killed and six wounded.

In 1721, the regiment received one company from the disbanded Veterani Dragoon Regiment.

During the War of the Polish Succession, the regiment served in Italy in 1734 where it took part to the battle of Parma on June 29. The carabinier company of the regiment, along with the carabiniers of the Mercy regiment and the horse grenadiers of the Althaun dragoons launched the first attack of this bloody battle. The regiment soon received reinforcements from Germany and by July 23, in the camp of Guingentole, it counted 1,115 men despite the heavy losses that it had suffered in the previous battle. It then took part to the battle of Guastalla. By April 30 1735, the regiment had melted down to only 460 horses, due to continual fighting and sickness. After the war, the regiment was stationed in Lombardy.

During the War of the Austrian Succession, the regiment first fought at Camposanto in 1743. It lost 20 killed, 66 wounded and 53 missing. In 1744, the regiment now counting only 516 horses took part to the enterprise against Naples. In 1746, it was at the engagement of Codogno. At the battle of Piacenza, it was deployed on the right wing along with Portugal Cuirassiers and Savoyen dragoons under baron Linden. They conducted a very successful attack against the Spanish infantry, capturing several flags and making a lot of prisoners. The regiment also fought at Rottofreno and took part to the enterprise against Provence. After the war, the regiment was stationed in Hungary.

At the outbreak of the Seven Years' War, in 1756, the regiment was stationed in the Honter Komitat in Slovakia and counted 815 men and 800 horses. On October 1, lieutenant-colonel Churfeld served outstandingly as volunteer in the role of adjutant-general at the battle of Lobositz.

On June 18 1757, the regiment fought under the command of field-marshal Daun at the battle of Kolin where it was deployed in the second line of the cavalry right wing in O'Donell Division. Both its colonel, count Belgiojoso, and its lieutenant-colonel, baron Sigmund Gabelkoven, were wounded during this bloody but victorious battle. On this day, the Rittmeister of the carabiniers of the regiment, Franz Philipp baron Rüdt von Callenberg, on receiving adjutant-general Schulz's report that the Prussian infantry was forming on the hill, immediately attacked them without being ordered to do so. His company suffered very heavy losses (60 horses), pushed back the Prussian infantry but failed to it. Rüdt and his lieutenant-colonel now fought dismounted. The Prussian advanced against the remaining carabiniers. Rüdt placed himself at the head of a group of dismounted carabiniers and ordered the mounted ones to renew their attack. Meanwhile he also attacked with his dismounted carabiniers. The attack was so successful that he captured three officers, two guns and several toopers. On November 22, at the battle of Breslau, the regiment was deployed in count Ludwig Starhemberg's brigade, in the second line of the cavalry left wing under count Stampach, supporting the infantry of the left wing. On December 5, the regiment also took part to the disastrous battle of Leuthen where it was deployed in Starhemberg's brigade in the second line of the cavalry left wing under general Serbelloni.

By August 2 1758, the regiment was serving in the first line of the main Austrian army under the command of Daun near Jaromirs. Daun was following up the Prussian army retiring through Bohemia after the failure of the Prussian invasion of Moravia. On October 14, the regiment took part to the battle of Hochkirch where it was deployed in Loudon's corps, to the southwest of Hochkirch.

By mid-August 1759, during the Austro-Imperial campaign in Saxony, the regiment was attached to Hadik's corps. On September 21, it took part in the combat of Korbitz (aka first combat of Meissen) where it was deployed on the left wing of Hadik's corps under major-general Schallenberg. Rittmeister baron Rüdt, as he was sent to support the left wing with a few companies of carabiniers, noticed that a company of Prussian grenadiers had penetrated the Austrian flank. Rüdt immediately moved his company over a ditch, charged the Prussians and repulsed them. During the fight Rüdt received no less than ten bayonet wounds. He remained lying on the battlefield and was finally captured. Two years later, this brave officer received the cross of the Maria-Theresa Order for his distinguished services at Kolin and Korbitz. In this engagement at Korbitz, the regiment suffered the following losses: 4 men killed, colonel baron Gabelkoven, major Weissmann, rittmeisters baron Rüdt, Michna and Kesche, lieutenant-colonel Hortinger and 83 troopers wounded, rittmeister baron Schmerzing and 49 men missing. In the order of battle of October 5 1759, four squadrons of the regiment along with its carabinier company were assigned to baron Gemmingen's Corps under general Gourcy. Another of its squadron was assigned to major-general Brentano's force. On October 29, while retreating after the action of Pretsch, the regiment was attacked by general Platen near Sickwitz and forced to withdraw in front of superior forces. On November 20, the regiment took part in the battle of Maxen where 3 of its squadrons were deployed in the first cavalry column of Sincère's corps under the command of lieutenant-general count Schallenberg while 2 other squadrons were attached to Brentano's corps initially posted at Röhrsdorf, 5 km north of Maxen. Its carabinier coy, for its part, was deployed in the vanguard of Sincère's corps under the command of major-general baron Sisckowitz.

In 1760, the regiment was with Loudon's corps. It fought at the battle of Landshut on June 23 where it did not loose a single man. On August 15, at Liegnitz, it courageously charged the Prussian infantry and captured five flags. During this battle, it had to deplore 4 men killed, Rittmeister Rott, lieutenant-colonel Globisen, lieutenant Conty and 10 men wounded, and 5 men missing.

For the campaigns of 1761 and 1762, the regiment alternated between the Saxon and Silesian theatres of operation. In 1762, it took part to the action of Peilau on the Fischerberg in Silesia. Colonel baron Sigmund Gabelkoven distinguished himself particularly in this encounter, being wounded twice and having two horses killed under him. He bandaged his wounds, mounted his third horse and remained on the field until he was sure that his men were victorious. 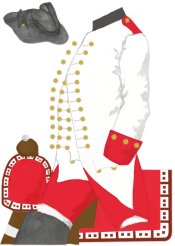 Uniform in 1762 - Source: Frédéric Aubert from a plate of Richard Couture and Ibrahim90 and from an illustration of the Albertina Handschrift

Raspe shows 16 brass buttons (instead of 12) on each side of the coat. He also illustrates a white waistbelt.