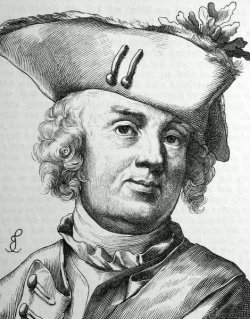 In 1701, at the beginning of the War of the Spanish Succession, this regiment was transferred to Dutch service.

In 1704, Schwerin served at the Schellenberg and at Blenheim.

In 1706, Schwerin was present at the Battle of Ramillies.

In 1707, Schwerin became a lieutenant-colonel in the army of the Duke of Mecklenburg-Schwerin.

In 1708, Schwerin was promoted to colonel.

In 1709, Schwerin was present at the Battle of Malplaquet.

In 1712, Schwerin served with the Swedish commander Stenbock at Gadebusch.

In 1713, Schwerin was with Charles XII of Sweden during his captivity at Bender.

In 1718, Schwerin was made major-general in the Swedish Army.

In 1719, Schwerin opposed the Hanoverian Army which invaded Mecklenburg. On March 6, he fought a brilliant action at Walsmuhlen.

In 1720, Schwerin entered the service of the King of Prussia. At first, he was employed in diplomatic missions.

In January 1722, Schwerin received the command of a Prussian infantry regiment.

In 1730, as a major-general, Schwerin was a member of the court martial which tried the Crown-Prince of Prussia (the future Frederick II) for desertion.

In 1731, Schwerin was promoted lieutenant-general in the Prussian Army.

In 1733, at the head of a Prussian army, Schwerin conducted with great skill the delicate and difficult task of settling the Mecklenburg question.

On March 8 1736, Schwerin was admitted into the Order of the Black Eagle.

In 1739, Schwerin was promoted general of infantry. During the life-time of King Frederick William, Schwerin was also employed in much administrative work.

On June 30 1740, on the eve of the War of the Austrian Succession, Frederick II promoted Schwerin to the rank of general field marshal and made him count a month later.

On April 10 1741, at the Battle of Mollwitz, Schwerin justified his sovereign's choice by his brilliant leadership, which, when the king had disappeared from the field, converted a doubtful battle into a victory which decided for the time being the fate of Silesia.

In 1742, after the conclusion of the First Silesian War, Schwerin was governor of the important fortresses of Brieg and Neisse.

In the Second Silesian War (1744-1745), Schwerin commanded the army which, marching from Glatz, met the King's army under the walls of Prague. Schwerin then played an important role in the siege and capture of that place (September 16 1744). When Frederick II was compelled to retreat from Bohemia, Schwerin again distinguished himself. He then retired to his estate during the years of peace.

In 1756, at the outbreak of the Seven Years' War, Schwerin reappeared on the field. While Frederick II led the invasion of Saxony, Schwerin conducted operations in Eastern Bohemia.

In 1757, when the Prussian army proceeded to the invasion of Bohemia, Schwerin led one of the Prussian columns. He joined Frederick at Prague. On May 6, he took an active part in the Battle of Prague. While leading a regiment of the left wing to the attack with its colour in his hand, the old field marshal was shot dead.