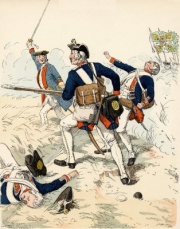 The battalions which would eventually form the new regiment were assembled in June 1713. Their troops originally came from the Füsilier-Garde and some garrison units initially stationed at Spandau, Frankfurt and Colberg. In 1715, these two field battalions were finally merged into a new regiment under the command of von Schwendy. It levied its recruits in Neumark (Beeskow, Bobersberg, Cottbus, Crossen, Frankfurt an der Oder, Rotenburg and Züllichau).

From 1743 till 1756, the regiment garrisoned Frankfurt an der Oder and its grenadiers, Cottbus.

After the Seven Years' War, the regiment garrisoned Frankfurt an der Oder and its grenadiers, Fürstenwalde.

The numbering system (Stammliste) was first used by Leopold I., Fürst von Anhalt-Dessau (Der alte Dessauer) in the Dessauer Spezifikation from 1737. Around 1780 the numbers were used in the printed Stammlisten, still with some variations for the fusilier regiments. It became official by "Cabinets-Ordre" from October 1, 1806. The present infantry regiment was attributed number 24.

The regiment was disbanded in October 1806 after the capitulation of Erfurt and Pasewalk.

On August 26 1756, when the Prussian Army was ordered to proceed to the invasion of Saxony, the regiment was part of the left column led by the Prince of Bevern. This column had concentrated in the area of Lübben, and then advanced through Lusatia by Hoyerswerda and Bautzen, to Hohenstein (Sept. 8) then to Lohmen north of the Elbe near Pirna. From September 11 to October 16, the regiment took part in the blockade and capture of the Saxon Army in the area of Pirna.

Death of Count Schwerin at the head of his regiment at Prague in 1757 - Source: Richard Knötel, 1895

On May 6 1757, during the invasion of Bohemia, the regiment took part in the Battle of Prague where it was deployed in the first line in Fouqué's Brigade. It was among the forces led by Winterfeldt who vainly assaulted Sterboholy around 1:00 p.m. During this battle, the regiment lost 13 officers and 522 men as well as his colonel killed while trying to rally the regiment. At the end of August, the regiment was part of the small Prussian army hastily assembled at Dresden by Frederick II to head towards Thuringia and to offer battle to the Franco-Imperial Army invading Saxony. On November 5, at the Battle of Rossbach, the regiment was deployed in the second line of the infantry right wing under Lieutenant-General von Forcade.

On July 23 1759, during the Russian campaign in Brandenburg, the regiment took part in the Battle of Paltzig where it was attached to Stutterheim's Division deployed on the left in the first line of infantry. It suffered heavily during this battle, losing 37 officers and 933 men. A few weeks later, on August 12, the regiment fought in the Battle of Kunersdorf where it was deployed in the first line of the left centre as part of Jung-Stutterheim's Brigade. During this battle, it was involved in the bloody infantry combat on the Kuhgrund, losing 425 men.

In July 1760, the regiment took part in the Siege of Dresden. On August 15, it fought in the Battle of Liegnitz; on September 17, in the Combat of Hochgiersdorf; and, on November 3, in the Battle of Torgau where it lost 10 officers and 699 men.

In 1761, the regiment campaigned in Saxony, being stationed on the Mulde.

On May 15 1762, the regiment took part in the Combat of Doebeln. On October 29, it fought in the Battle of Freiberg where it stormed the heights of St. Michael. 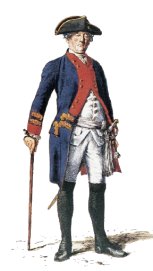 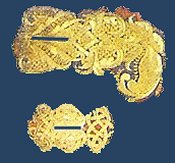 The drummer lace consisted of a white braid decorated with complex yellow and black pattern with a central white line and red rhombuses.