During the Great Northern War, the regiment was at the landing in Själland, then shipped to Livland in 1710 and belonged to the King's Army thereafter. It fought at Klissow 1702, Pultrusk 1703, Warsaw 1705 and Holowczin 1708. Captured after Poltava, reprised 1709-10 and took part in the Scanian campaign. In Scania 1712, Norwegian campaigns 1716-18.

By the end of August 1757, four companies of the regiment (about 500 men) had been transported across the Baltic towards Swedish-Pomerania to take part to the invasion of Prussian-Pomerania under field marshal Mathias Alexander von Ungern Sternberg. On December 27, a detachment of 50 men were among the Swedish force which was sent out of Trebel to chase away a force of Prussian cavalry reconnoitring the Swedish positions. During its approach of the Prussian scouting party, the Swedish force was attacked by a large body of cavalry. The Swedish cavalrymen fled the field after firing a single volley. On December 30, another detachment of 60 men was part of the Swedish force defending the crossing at Nehringen. They were ordered to retreat on Triebsees in front of an attacking Prussian force and undertook a fighting retreat in good order without casualties.

In 1758, 2 additional companies (300 men) of the regiment were sent to Pomerania to reinforce the Swedish expeditionary force operating against Prussia. On September 26, a detachment of 300 men of the regiment, under Lieutenant-colonel Baron Klas Erik Silferhjelm, took part to the combat of Tarmow, they were charged and routed by 5 squadrons of Möhring Hussars. Two days later, on September 28, four squadrons of the regiment took part in the successful defence of Fehrbellin against a Prussian assault. 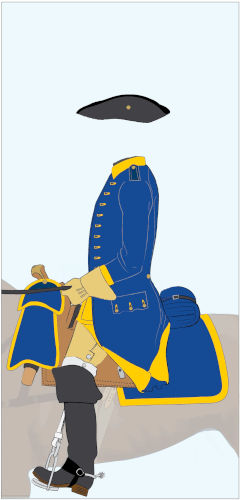