This permanent "Varvade" regiment was raised in 1749 at Stralsund where it assumed garrison duties. It consisted of 1,200 privates (about 5/6 Germans and 1/6 Swedes) in 2 battalions of 4 companies. Each company had 150 privates and 11 officers, NCOs and musicians.

In 1754, a company was stationed at Göteborg.

Until 1757, 4 companies of the regiment garrisoned Stralsund in Swedish Pomerania while 600 men were stationed at Landskrona. 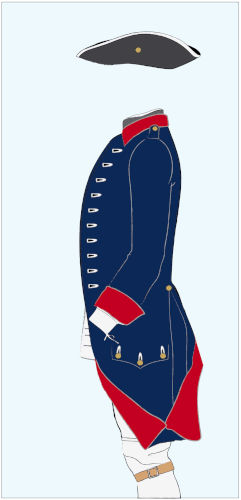 Horses were equipped with blue housing with a red border.

Kompanifana (Ordonnance flag): red field; centre device consisting of a lilac-coloured circle charged with 3 gold crowns, the whole surmounted by a large gold crown; one yellow leaf on each side below the central circle.