In 1709, Emperor Joseph I decided to raise two new infantry regiments. OFWM Engelhard von Plischau (sometime written “Plüschau”) was appointed proprietor of one of these regiments. On February 13, 1709, he received the relevant decree (the other regiment, the future I.R. 29, was created by GFWM Prince Albert von Braunschweig-Wolfenbüttel). The recruits were raised in Bavaria, around Ingolstadt, in addition, Plischau received two companies from Guttenstein Infantry and two from Du Saix d’Arnant as cadre. The regiment was supposed to count twelve fusilier companies and one grenadier company, for a total of 1,600 men. Count Hohenfeld was appointed lieutenant-colonel; and Johann Franz von Leeuven (written also “Löwen”), major (OWM). The grenadiers and four fusilier coys were reviewed in Straubing, four fusilier coys in Landshut and four in Ingolstadt.

At the end of the War of the Spanish Succession, in 1713, the regiment took part in the defence of Freiburg.

In 1716, the regiment took part in the war against the Turks.

During the War of the Polish Succession, on June 29 1734, the regiment took part in the battle of Parma.

During, the regiment served in many campaigns.

In October 1741, during the War of the Austrian Succession (1740-48), GFWM Moritz Wilhelm von Roth was appointed proprietor of the regiment (3 battalions and 2 grenadier companies) which was stationed in Italy. In May 1742, the regiment counted 1,392 men, 590 of them detached in various forts as garrison. Initially, the three battalions were concentrated into only two battalions. On February 8, 1743, the regiment took part in the Battle of Camposanto. On June 16, 1746, it fought in the Battle of Piacenza. At the end of the year, it accompanied FZM Ulysses Browne’s Corps to Provence and later took part in the siege of Genoa.

From the end of 1748 until 1751, the regiment garrisoned Mantua. It was then transferred to Cremona, Pizzighetone and Bozzolo. 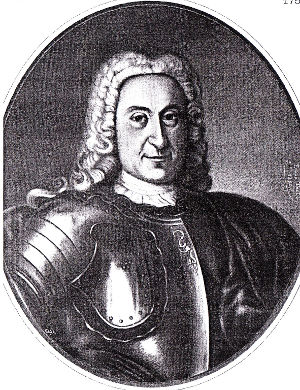 Since the creation of the regiment, its successive chefs were:

During the Seven Years' War, its successive colonels-commanders were:

Regimental numbers were introduced only in 1769 when this regiment was designated as "I.R. 22".

In January 1757, Pappenheim’s Battalion went to the region of Reichenberg (present-day Liberec/CZ). On February 20, the grenadier company of Captain O’Neillan took part in surprise attack on a Prussian detachment at Hirschfelde. O’Neillan was killed during the fight. On April 21, during the Prussian invasion of Bohemia, this field battalion and the grenadiers took part in the Combat of Reichenberg where they were posted west of the Neisse in the entrenchments in front of Reichenberg. On May 6, the same field-battalion took part in the Battle of Prague where it was deployed in Count Peroni's Brigade, in the second line of the left wing of infantry under baron Kheul. In this battle, the regiment lost 2 officers and 24 men killed; Colonel Baron Ellrichshausen, 7 officers and 45 men wounded; and 76 men missing or taken prisoners of war. After the battle, the battalion and the grenadiers took refuge into Prague and took part in the defence of Prague where they were posted at the “Korn-Tor” Gate. On September 7, when General Nádasdy attacked Winterfeldt's isolated corps in the Combat of Moys, this field-battalion and the grenadiers of the regiment were deployed in the second line of the infantry right division under the command of Lieutenant-general Wied. Two grenadiers were killed; and Colonel Baron Ellrichshausen, Major Baron Patrik Olivier Wallis and 41 men, wounded. On November 22, this field-battalion and the grenadiers of the regiment took part in the Battle of Breslau where it was part of the Reserve Corps in Baron Otterwolf's Brigade. They stormed the Prussian entrenchments near Klein-Mochbern and Gräbschen. After the surrender of the Prussians in Breslau, the battalion and the grenadiers were assigned to the garrison of the place and FML Sprecher von Bernegg was appointed commander of the fortress. In December, Frederick II laid siege to Breslau which surrendered on December 21. The entire battalion and all grenadiers (to the exception of Colonel Ellrichshausen, who was at that time at the headquarters of Prince Charles de Lorraine were taken prisoner of war. By the end of the year, the garrison-battalion of the regiment was stationed at Pavia.

In May 1758, the officers and soldiers captured at Breslau the previous year were exchanged. With some new recruits, the regiment (one field-battalion and the grenadiers) was re-established at 592 men. In August, they were deployed in FZM Harsch’s Corps in Silesia. After the unsuccessfull siege of the Fortress of Neisse, this corps took up its winter-quarters, the regiment being quartered in Jaromir (present-day Jaroměř/CZ) and Smiritz (present-day Smiřice/CZ).

At the beginning of 1759, the two batallions of the regiment (1,214 men) previously stationed in Italy were sent to Bohemia. In March they arrived at Prague. The garrison-battalion remained in Prague while the field-battalion marched join to the main army where it was reunited with the other field-battalion. By mid August, the field-battalions and the grenadiers were part of Daun's Corps posted in Silesia. On September 2, they were present at the combat of Sorau but were not involved in any fighting. In November, the grenadiers of the regiment were converged with others in a grenadier battalion and, on November 20, took part in the Battle of Maxen under the command of Major-General Siskovics. Both battalions and the grenadiers spent the winter in a suburb of Dresden.

In June 1760, the two field-battalions and the grenadiers were allocated to the corps of FZM Count Lacy near Boxdorf in Upper Lusatia. On July 7, they took part in a combat near Bautzen. On September 28, Lacy marched with 15,000 men (including the present regiment) towards Berlin where he arrived on October 1 and effected a junction with a Russian corps. The grenadiers spent some days at Friedrichstadt (part of Berlin) while the two field-battalions were posted in tents outside the city despite the rainy weather. Lacy then retired towards Torgau. On November 3, the regiment took part in the battle of Torgau where it was in the “Corps de Reserve” and saw no action. The regiment spent the winter in villages around Dresden.

In March 1761, the garrison-battalion was transferred from Prague to Dresden, only the “Depositorium”, in which the recruits were trained and baggage of the regiment stored, was left in Prague. It consisted of 5 officers and 133 men. Since May, the two field-battalions and the grenadiers were deployed in FZM Count Lacy’s Corps in a camp near Boxdorf in Upper Lusatia. They were later transferred to a camp near Radeberg. In December, they took up their winter-quarters around Grossenhain in Saxony. The regiment was not involved in any action during that year.

In 1762, a detachment of 4 officers and 300 men was assigned to the garrison of Schweidnitz. Meanwhile, the grenadiers were converged with those of Thürheim Infantry and Baden-Durlach Infantry to form a grenadier battalion which was allocated to the corps of FML O’Kelly. The two field-battalions were in Lacy’s Corps. On August 16, the regiment was present at the Battle of Reichenbach but was not involved in any fighting. After the surrender of Schweidnitz on October 10, the detachment of the regiment which formed part of the garrison, was taken prisoners of war. During siege, it had lost 18 men, killed; and 27 who died from diseases.

N.B.: in his work, Gustav Ritter Hubka, mentions that, from 1714 till 1767, the uniform of this regiment had ponceau red lapels and cuffs, and yellow buttons. Furthermore, from 1757 to 1767, he mentions a blue waistcoat and blue turnbacks with white breeches. Even though, this description seems very surprising, it must be pointed out that Hubka has been Oberlieutenant and Regiments-Adjutant in this regiment, so he might have had access to privileged sources. Nevertheless, in the present section we follow the Delacre Handschrift and the Bautzener Handschrift.

Uniform in 1757 - Source: Frédéric Aubert from a template made by Richard Couture.

Until 1760, despite the new regulation of 1755, the musicians probably wore coats of reversed colours with white swallow nests and white turnbacks. From 1760, they wore uniforms identical to those of the privates with scarlet swallow nests on the shoulders.

Harald Skala for the translation and integration of Hubka’s work

Michael Zahn for initial information about this regiment