The ranks of the artillery were filled by recruitment.

At the beginning of the Seven Years' War, the Swedish artillery counted about 3,000 men in 38 companies.

The artillery regiment in Stockholm totalled 960 men, excluding staff, and consisted of 12 companies of 80 men each :

Besides this regiment, there were about 830 men stationed in the following places :

Finally, there were also:

By the end of August 1757, 935 artillerymen of the regiment had been transported across the Baltic towards Swedish-Pomerania. They came from:

At their arrival in Pomerania, these artillerymen were converged with 46 artillerymen of the garrison of Stralsund to form a Field Artillery Regiment of 12 coys (981 men). The regiment was equipped with:

In May 1758, the converged Field Artillery Regiment was reorganised into 18 coys with 4 pieces each. At the end of June, besides the artillery of Stralsund, the regiment still counted 603 men. In July, another reinforcement of 661 artillerymen was sent to Pomerania to reinforce the Swedish expeditionary force operating against Prussia. These 661 men came from:

After the arrival of these reinforcements, the Pomeranian Field Artillery Regiment was reorganised once more into 8 brigades for a total of 24 coys with 4 pieces each. The regiment was equipped with:

After the disastrous offensive of General Gustaf David Hamiltons against Berlin in the Autumn of 1758, the Swedes formed a light brigade consisting of hussars, horse-jägers, grenadiers, free-corps infantry and a special light horse-drawn field artillery with 3 pdr guns (better than their Prussian equivalents). Swedish artillery was considered with respect by the Prussian war historian Marschall Sulicki. The commander of this light brigade was the young multi-talented (he was earlier serving with the fortress artillery and made some exquisite drawings of Pomerania) grenadier-major Jacob Magnus Sprengtporten.

In the Summer of 1759, the Pomeranian Field Artillery Regiment counted 1,002 men. The same year, several batteries took part to the campaign at the mouth of the Oder:

In 1761, the Swedish army suffered from a shortage of horse and was forced to leave all its field guns in the town of Grimen. Only the regimental guns accompanied the army.

The uniform was of the same cut as the infantry uniform. Engineers, pioneers, pontoniers, miners wore the same uniform. 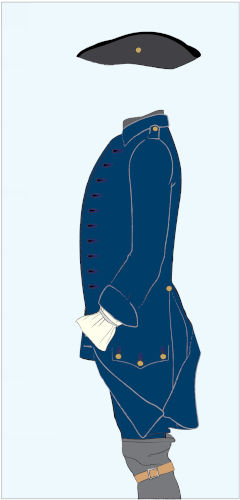 Privates were armed with a musket and did not carry swords.

NCOs were distinguished by a thin gold lace on the tricorne.

Officers were distinguished by a wide gold lace on the tricorne.