The artefacts illustrated in this article depict the uniform of the Södermanlands Infantry Regiment. However, the uniforms of all Swedish line line regiments were very standardized and, besides rare variations in the colour of facings, waistcoats and breeches, all regiments had very similar uniforms. 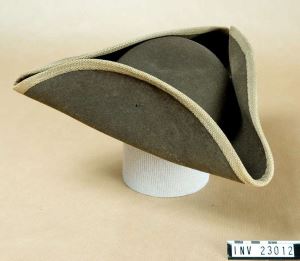 Black tricorne laced in the metal colour without cockade or button.

The grenadier cap had a Prussian-style metal front plate with an Austrian-style blue bag laced in the metal colour. Since grenadier caps looked very similar to those of Prussian grenadiers, they were often covered with a black cloth to avoid any confusion during combat.

Long sleeved woollen waistcoat with pewter buttons. The waistcoat was saffron yellow for most regiments.

Woollen breeches with pewter buttons. Breeches were saffron yellow for most regiments. 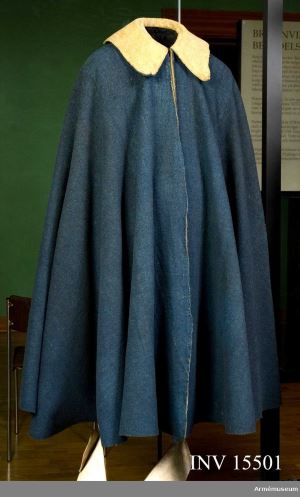 Woollen stockings were usually white fastened with a red-brown leather strap at the knee.

Swedish infantry privates were armed with a musket, a bayonet and a sable. For more details on armament, please refer to our article Swedish Line Infantry Weapons.

Backpack made of calfskin on a white leather strap.

Peculiarities of Drummers and Fifers 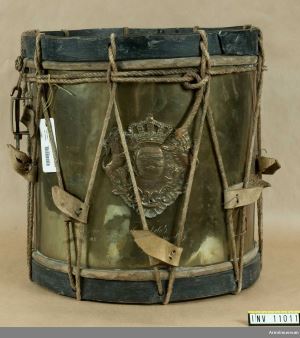 Example of an infantry drum circa 1750 - Source: DigitalMuseum and the Swedish Army Museum – Creative Commons 3.0 license

Drummers of some regiments wore reversed colour uniforms with white swallow nests at the shoulders. Otherwise, they wore the standard blue uniform with swallow nests as sole distinction.

Tricorne laced in silver or gold depending on the metal colour of the uniform. NCOs carried partizans.

Officers carried spontoons. They were also armed with a sword (instead of a sabre) and a pair of pistols when mounted.