After the Great Northern War (1700-1721) and the Russo-Swedish War (1741-1743), the Swedish Economy was in bad shape. Financial and resources problems influenced the types of muskets and rifles used by Swedish Line Infantry during Seven Year War. Although some model of muskets were introduced during the 1730-1750, some Swedish units still had to use old weapons from the arsenal, some of them dating back to Great Northern War.

As mentioned above, older models of musket were also in use during the Seven Years' War, such as this M1731 musket. 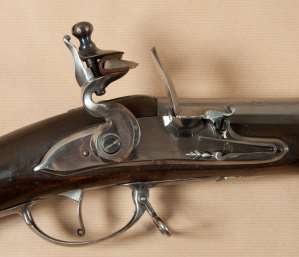 Detail of the flintlock of the Swedish Musket M1731 - Source: DigitalMuseum and the Swedish Army Museum

As mentioned above, older models of musket were also in use during the Seven Years' War, such as this M1738 musket.

This model of musket constituted the main firearm used by the Swedish infantry during the Seven Years' War. 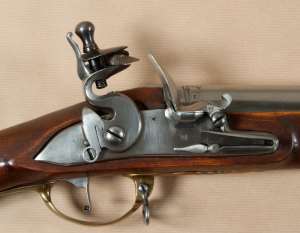 Detail of the flintlock of the Swedish Musket M1747 - Source: DigitalMuseum and the Swedish Army Museum

Swedish muskets of that period were typical because they used a flintlock quite different from those used by other armies taking part in Seven Years' War. The sling used to carry the musket was white. Bayonet, ramrod and flintlock were made of iron, other pieces of copper. The very long bayonet was another characteristic of Swedish firearms of this period.

The Swedish bayonets of this period were particularly long (71 cm). The socket of the bayonet was strengthened by a small ring.

The M1747 bayonet was fixed to the musket the same way than for the Prussian M1740. The shape of the blade was also very similar. The main difference resided in the locking system fastening the bayonet to the muzzle of the musket.

This type of sabre was used by Swedish Infantry till 1856. There were a lot of variations for this sabre. Some blade points were oval or sharp. Weight and length varied accordingly. This type of sabre looks very similar to the Prussian M1715, the main difference being the way to fasten the sling.

As for the sabre, there were various designs for the scabbard. Once mote, they are pretty similar to their Prussian counterparts with the copper hook and copper tip.

This type of partizan was used by Swedish Infantry NCOs from 1700 to 1791. Its blade, including its socket was made of iron.

The heart shaped blade of this spontoon is made of iron, the ferrule is made of copper. However, the blade of the spontoon could be of various shapes. 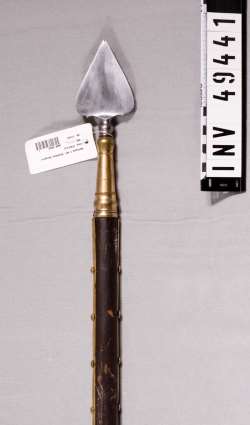 Besides a spontoon, officers also carried a sword. Generally, there were no standardized type of sword. Each specimen could be of a different design, weight or length. Bellow we present a few specimens.

Tomasz Karpiński for the initial version of this article