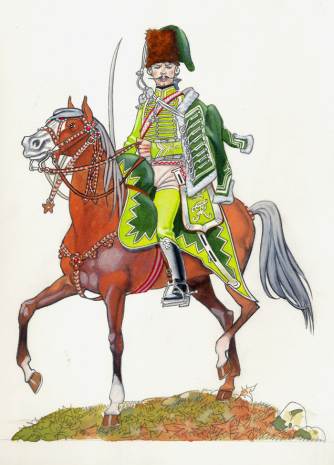 The regiment was raised in 1721 at a strength of 30 men by Lieutenant-General von Wuthenow (died in office). It recruited mainly Uhlans in East Prussia. Until 1735, this unit would not form a distinct regiment but would rather be attached to a dragoon regiment (the VIth Dragoons from 1721, the VIIth Dragoons from 1727, and the VIth Dragoons again from 1732 to 1735). In 1722, the unit was increased by two companies. In 1730, it was increased to three squadrons. and command passed to Major Johann von Brunikowski. In 1732, Prince Eugen von Anhalt-Dessau became “Chef”.

In 1735, the “Hussar Corps” was established as an independent unit. In 1737, von Brunikowsi became its “Chef”. The same year, three more squadrons were added.

In 1740, the unit was established as a regiment. The same years, three of its squadrons were sent to Silesia to reinforce the Leibhusaren (Nr 2) and two more were used to create the 3rd Hussars. The remaining squadron, under Major von Mackerodt, was again reinforced by two squadrons. In 1741, the two new squadrons went to form the 5th Hussars and 7th Hussars. Brunikowski, now a colonel, had kept back 10 men from each squadron that he had been ordered to send away. With these and new recruits, he raised a new regiment of five squadrons in Prussia in 1741. These he took to Silesia and increased his regiment to ten squadrons.

The regiment was often referred to as die Grünen (the Greens).

From 1742, after the conquest of Silesia, Lower Silesia became the inspectorate of the regiment. From 1747 to 1756, its garrison places were Guhrau, Herrnstadt, Steinau, Sulau and Trachenberg.

On August 26 1756, when the Prussian Army proceeded to the invasion of Saxony, the regiment was part of the left column led by the Prince of Bevern. This column had concentrated in the area of Lübben, then advanced through Lusatia by Hoyerswerda and Bautzen, to Hohenstein (Sept. 8) then to Lohmen north of the Elbe near Pirna. On October 1, 8 of its squadrons took part in the Battle of Lobositz where they stood on the right wing near the Homolka Berg, harassing the Austrians near Sullowitz. They then covered the second attack.

In mid April 1757, the regiment formed part of the army who proceeded to the invasion of Bohemia. On May 6, the regiment did not take part in the Battle of Prague. It was rather deployed on the left bank of the Moldau near the Weissenberg as part of Field Marshal Keith's Corps. On June 18, 5 squadrons of the regiment took part in the Battle of Kolin. They were deployed in the cavalry vanguard at the extreme left under under General von Zieten. At the end of August, the regiment was part of the small Prussian army hastily assembled at Dresden by Frederick II to head towards Thuringia and to offer battle to the Franco-Imperial army invading Saxony. On September 14, when Frederick was forced to divide his army to contain the French in the region of Magdeburg and to secure the Prussian magazines in the area of Torgau, the regiment remained with Frederick at Erfurt to observe the Franco-Imperial army. On September 15, the regiment was part of Seydlitz's force which occupied Gotha. On September 19, they were temporarily chased from the town by a Franco-Imperial force but Seydlitz managed to recapture Gotha and to occupy it until September 22. On November 5, at the Battle of Rossbach, 5 squadrons of the regiment were deployed as flank guard on the right wing while the 5 other squadrons were not deployed on the battlefield. In this battle, the regiment took 4 cannon and pursued the beaten enemy through Erfurt. On December 5 at the Battle of Leuthen, its second battalion (5 squadrons) was deployed in the vanguard which attacked the Austrian left flank.

On February 28, 1759, Major-General Knobloch sent the regiment forward from Erfurt under Friedrich Wilhelm Gottfried Arend von Kleist. From February 24 to March 4, about 250 men of the regiment were part of the small Prussian corps under the command of Major-General von Wobersnow who made an incursion in Poland against the Russian magazines. During this incursion, Wobersnow's forces destroyed food supplies which would have supplied 50,000 men for 3 months. In May, the regiment was part of Prince Heinrich's Army who launched an incursion into Franconia. In the afternoon of May 11, it formed part of the detachment under the command of General Platen which charged Riedesel's Austro-Imperial rearguard which was retreating towards Kulmbach. Platen took 2,500 men prisoners. On August 12, the regiment fought in the Battle of Kunersdorf where it was deployed in the second line of the left wing as part of Spaen's Brigade. It was among the last Prussian units to leave the battlefield. On September 8, 1 squadron of the the regiment took part in the Combat of Zinna where it was deployed on the right wing. On September 21, a detachment of the regiment took part in the Combat of Korbitz where it was deployed in the second line of the right wing under Major Hundt. On December 3 and 4, 100 men of the regiment were attached to a small isolated Prussian force under Major-General Dierecke who had taken post at Meissen. This small corps was attacked by a much stronger Austrian force and, during the Combat of Meissen, forced to retire.

On April 2, 1761, the regiment fought in the Combat of Saalfeld. 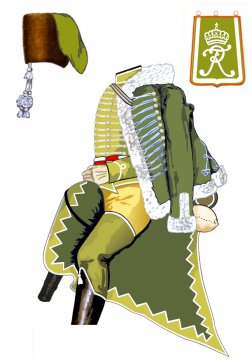 Musicians wore uniform similar to those of the troopers with the following exceptions:

Hussar regiments carried no standards during the Seven Years' War.

Digby Smith for the initial version of this article and User:Zahn for the research on the uniforms.