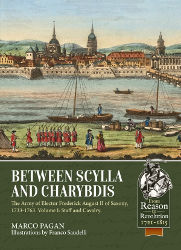 The first volume on the history of the Saxon Army between 1733 and 1763 published Dr Marco Pagan and Franco Saudelli, two well known contributors to “Project SYW”. This volume covers the participation of this army to the War of the Polish Succession (1733-35), the Austro-Turkish War (1735-39) and the First (1740-42) and Second Silesian Wars (1744-45). It then concentrates on the role of the Saxon cavalry during the Seven Years’ War (1756-63) and presents the cavalry units. Annexes list the Saxon staff and army at various times. This volume includes 8 pages of colour illustrations by the very talented Franco Saudelli and a few black and white uniform plates and maps.

The book is available from Helion & Company.