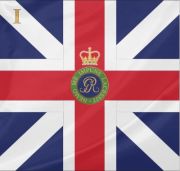 Image of the week: King Colour of the British 1st (Royal) Foot by Frédéric Aubert

From April 9 to 15, we have created/improved the following articles: