The regiment was raised on September 12 1684 and took the name of the Province of Tournaisis. Indeed, expecting a Coalition to soon form against France, Louis XIV raised 30 new regiments from September 1 to 30 for the defence of the various places of his realm. By raising one regiment a day, he avoided any problem of precedence among these new regiments.

During the War of the Polish Succession, the regiment occupied Lorraine in 1733.

During the War of the Austrian Succession, the regiment initially served in Provence in 1742 and 1743. In 1744, it was transferred to the Italian theatre of operation. On June 16 1746, it took part in the Battle of Piacenza. In 1747, the regiment returned to Provence.

During the Seven Years' War, the regiment ranked 81st and was under the command of:

Somewhere between August 23 and September 6 1757, the regiment joined the Army of Saxony, led by the Prince de Soubise, in the area of Erfurt and Eisenach for the planned reconquest of Saxony. On September 27, it had been detached to Hanau. At the end of the year, it took its winter-quarters in Allendorf in Hessen.

In April 1758, when the Comte de Clermont redeployed his army along the Rhine, the regiment was stationed in a fort near Kaiserswerth/Düsseldorf. After the successful crossing of the Rhine by an Allied Army under Ferdinand of Brunswick on May 31, the regiment did not join Clermont's Army at Rheinberg but was rather deployed at an unspecified location. On June 23, the regiment took part in the Battle of Krefeld where it was placed on the right wing of the second line under Harvé. In Mid August, after Ferdinand's retreat to the east bank of the Rhine, the regiment, as part of the Army of the Lower Rhine, now under Contades, recrossed the Rhine to follow the Allies. On August 20, it was encamped near Wesel where it was placed in the centre of the second line.

In January 1760, the regiment took its winter-quarters, in the first line of the French army deployed on the Main and the Upper Rhine under the command of Victor François Duc de Broglie. By mid-March, the regiment was billeted in Neuwied, still in the first line. By May 23, it was assigned to garrison duty in various places of western Germany. On October 16, it was at the Battle of Clostercamp where it formed part of the reserve deployed south of Rheinberg.

At the beginning of February 1761, the regiment was attached to the Army of the Lower Rhine and was deployed in the area of Moers under Lieutenant-General de Roquepine. 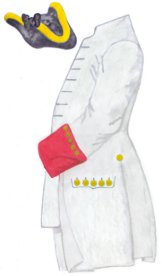