A Västgotafana is mentioned before 1550. The regiment was raised in 1628 as Västgöta Ryttare. In 1691, it was incorporated to the Indelta system. It counted 8 companies for a total of 1,000 men. Exceptionally, it was organised as a dragoon regiment.

During the Great Northern War, the regiment took part at the landing in Själland in 1700, then in homeland. In the Scanian campaign of 1710 and then shipped to Germany in 1712. It was present at the Battle of Gadebusch on December 20 1712. Captured at Tönningen and rebuilt. In the Norwegian campaign of 1718.

In 1757, 4 companies (500 men) of the regiment were part of the expeditionary force sent to serve in the campaign in Pomerania under Field-marshal Mathias Alexander von Ungern Sternberg.

In 1758, 2 additional companies (300 men) of the regiment were sent to Pomerania to reinforce the Swedish expeditionary force operating against Prussia.

On August 27, 1759, during the campaign of Pomerania, the regiment formed part of the force who covered the assault and capture of the entrenchments of Swinemünde. On October 1, the regiment followed Fersen's Corps when it left the Oder Islands to join the Swedish Main Army in Pasewalk.

On August 22, 1761, part of the regiment fought in an engagement against the Pomeranian Provincial Hussars near Neubrandenburg, losing a standard. 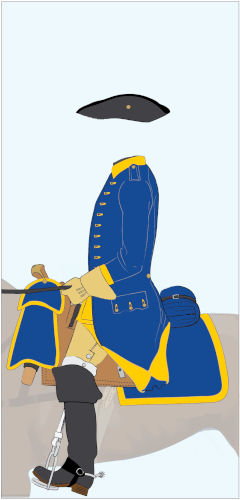 Troopers were armed with a sword, a pair of pistols and a carbine. Exceptionally, this heavy cavalry regiment was armed with a bayonet and did not wear breastplates.

Kompanistandar (ordonnance standard): field separated diagonally into 2 triangles, a black triangle along the pole and a yellow triangle