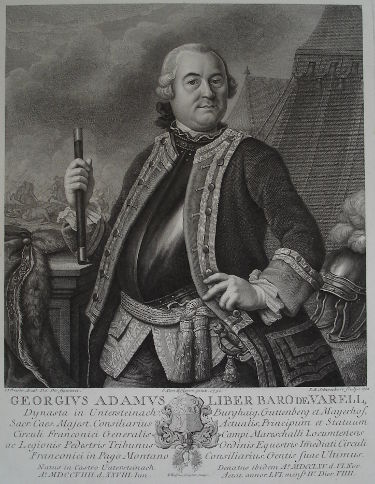 Varell's family came to Franconia at the beginning of the 17th century and was enrolled there in the imperial knighthood of the canton of Gebürg.

Georg Adam was born on June 28, 1709 as the son of Georg Christoph von Varell and Dorothea Blandina von Schaumberg. He lost his parents at an early age, his mother died in childbirth in 1709 and his father in 1725.

Early education was provided by private tutors. Later he changed to the Erlangen Knights' Academy, until finally a "special desire for military life" had broken out with him. Neither a Grand Tour through Europe nor the usual short university studies preceded this.

In 1728, Varell joined the Würzburg military. He became an ensign in one of the Würzburg house regiments Bibra, Winzingerode/Milching or Eyb. Further details from this period are not known.

In 1733, Varell was promoted to captain and received a (Würzburg) company in the Franconian district regiment Tastungen. In the seniority tables, he is listed as of March 10 1734.

Varell was not particularly conspicuous in the War of Polish Succession (1733-35).

On July 26, 1741 Varell became major: After the death of the regiment's owner Johann Sebastian Haller von Hallerstein, the staff officers of the regiment were promoted by one rank each. Shortly afterwards, on November 12, he married Maria Anna Cordula Heußlein von Eusenheim, the marriage remained childless.

As a major, Varell took part in the campaign on the Neckar River, when the Franconian Imperial Circle ensured his neutrality in the War of the Austrian Succession (1740-48). On July 26, 1747, Varell was appointed lieutenant-colonel. On November 20, 1750, the rank of colonel followed. After the death of Johann von Zehe ( June 15, 1751), he received the regiment on March 20, 1752. Three and a half years later Varell was promoted to major-general.

After the Battle of Rossbach (November 5, 1757), Varell clearly presented the inherent shortcomings of the Franconian regiments. Two-thirds of the regiments (he exaggerates) had consisted of new and undisciplined recruits, “so to speak, disguised peasants who only bore the name and appearance of a soldier.” The rather high proportion of unexperienced soldiers was simply due to the character of the Kreis troops, whose contingents were reduced by half in peacetime, i.e. they were not kept on the feet in their full establishment.

A printed curriculum vitae reveals little about his involvement in the Seven Years' War, with one exception. Varell had distinguished himself by “so much wisdom and bravery, and, especially in enemy territory, wisdom and philanthropy.” As a speech of praise and mourning by artillery Major Georg Christoph von Stein specifies. Varell had shown charity and unselfishness in the collection of contributions in Halle (August 1760), “by not extorting money as usual in enemy countries, but by living for his own money. He had also helped captured officers with his money. The poor inhabitants of bombed Dresden had also profited from his help.” In short, an exemplary Christian warrior.

A look at files and contemporary documents does not show any conspicuous feats and only reveals Varell's use in the combined k.k. and Reichsarmee.

In 1757, Varell marched in the 1st Fürstenberger Corps to Thuringia. In the order of battle of August, Varell first commanded the infantry regiments Nassau-Weilburg and Pfalz-Zweibrücken in the second line, then Pfalz-Zweibrücken and Salzburg in the first.

In 1758, during the Prussian advance towards Franconia, Varell reported from Bamberg, and in September from Königstein near Dresden.

In 1759, Varell was in Luszinsky’s Corps. Mentioned are the combat near Torgau under the command of St. Andrée (who was both Franconian and Austrian FZM), shortly before the conquest of Leipzig. He is also mentioned with praise in the following Combat of Korbitz (September 21).

Since 1760, Varell commanded en chef the Franconian infantry (the cavalry was under Major-General Wolfskeel). In 1760, Varell was with Luszinsky’s Corps near Römhild. In August, the aforementioned occupation of Halle took place.

In September 1761 Varell is mentioned while describing the positions at Ronneburg and Altenberg and at the cannonade at Lohma. On October 20, 1761 he became Feldmarshall Lieutenant.

Varell died on November 6, 1765 after several acute attacks of gout at the age of only 57 years.

Georg Adam von Varell was the last of his family. At his funeral, according to old tradition, his shield was broken and thrown into his tomb with the cry “Varell gewesen und nicht mehr Varell” ("Varell has been, and not Varell anymore!“).

The posthumous (1768) portrait shows Varell at the height of his career. In front of a tent and a cavalry battle on the horizon he is standing in uniform with armour and general's staff. The picture combines the face of Varell from an older painting (1751) with the uniform of his last rank as field marshal lieutenant. The lacing is reminiscent of the Austrian general's uniform. Some of the Franconian generals seem to have - from when? - adapted their uniform to the Austrian uniform, but with a blue ground colour. Whether the facings followed those of their regiment or were red is unknown. In 1793 this practice, Austrian uniform with blue ground colour, became official.

Documents from the Bavarian state archives at Nuremberg and Bamberg.

Klaus Roider for the initial version of this article