There is only scarce information about the first decades of existence of this regiment. Most of its records and its archive have been lost during the riot of 1789 in Bruges and later during the surprise attack on Namur.

On May 1 1756, Maria Theresa signed a contract with the French King Louis XV by which he promised to send an auxiliary corps of 24,000 men (later increased to 180,000) as support in the war against Prussia.

This infantry regiment was created on March 25 1757 as a new unit in the French Army. Its two battalions were raised in the Bishopric of Liège by the French Colonel Charles Albert Baron Vierzet. These two battalions were added to the 30,000 men strong auxiliary corps of the Prince de Soubise and marched to Saxony.

During the Seven Years' War, the regiment proprietor was:

During the Seven Years' War, the regiment effective commander was:

Regimental numbers were introduced only in 1769 when this regiment was designated as "I.R. 58". It existed till 1918 as "I.R. Erzherzog Ludwig Salvator". .

By August 1 1757, the regiment was garrisoning Givet and Charlemont in Hainault.

In 1758, Sikora mentions the two battalions of the regiment as part of Broglie's Corps operating in Hessen. He also pretends that, on July 23, they were present at the Combat of Sandershausen. However, the French order of battle for this battle does not list this regiment.

On April 13 1759, according to Sikora, the regiment along with six other “German” battalions defended the village Bergen near Frankfurt/Main during the Battle of Bergen. However, once more, this is not supported by the French order of battle.

By May 23 1760, the regiment was part of the second line of Broglie's Army, placed under the command of the Prince de Croy. On July 10, the regiment took part in the Combat of Corbach where it was attached to Broglie's vanguard under the Baron de Clausen, deployed in the wood to the left of Corbach at the beginning of the action. On October 2, Broglie sent M. d'Aubigny's detachment (including this regiment) from Stainville's Corps towards the Lower Rhine. On October 11, this detachment took position between Neuss and Meerbusch.

By February 1761, the regiment had taken up its winter-quarters in the region of Liège. It was then allocated to de Muy's Corps who marched on Hachenburg and reinforced the Maréchal de Broglie. On July 16, the regiment took part in the Battle of Vellinghausen where it was deployed in Bouillon<s Brigade in the second line of the centre of Soubise's Army of the Lower Rhine. On August 28, the first battalion of the regiment was attacked by the Hereditary Prince of Brunswick at Dorsten. The battalion opposed a strong resistance, fighting in the streets and on the town place. The Allies finally captured the place along with Soubise's bakery, taking I./Vierzet Infanterie prisoners along with its colonel and several piquets. In November, the regiment was part of the corps of M. de Langeron posted in the district of Wesel on the right bank of the Rhine from the Issel up to Rees. On October 16, the regiment took part in the Battle of Clostercamp where it was deployed on the far right under the Maréchal-de-Camp Comte de Chabot.

By March 1762, the regiment formed part of the Prince de Condé's Army of the Lower Rhine. In November, it returned to France. On November 25, towards the end of the war, the regiment was removed from the French Army.

On January 26 1763, the disbanded regiment was taken in Imperial service. It was sent to Bruxelles and received new colours. The Baron de Vierzet was promoted to major-general and appointed proprietor of the regiment. The Baron Saint-Omer and Joseph Baron Bielke were promoted to lieutenant-colonel. The regiment was increased to 15 fusilier companies à 140 men and two grenadier companies à 100 men. The additional men were enlisted in the District of Liège. 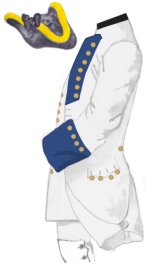