From 1718 to 1720, the new Tsaritsyn defensive line was built between the Volga and Don rivers. It was initially planned to be garrisoned by Don Cossacks, but in 1734 the Imperial government decided to settle these cossacks from the Tsaritsyn defensive line to the bank of the Volga River between Tsaritsyn (present-day Volgograd) and Kamyshin. These cossacks were detached from the Don Cossack Host to establish the new Volga Cossack Host.

In 1756, these Cossacks were stationed in their region of origin. They did not participate in any campaign of the Seven Years' War. 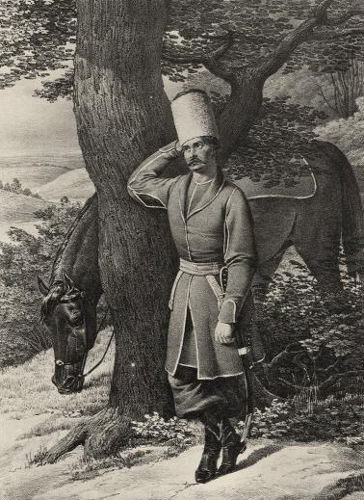 Detail of an illustration depicting a Volga Cossack circa 1774
Source: Viskovatov's work

At the outbreak of the Seven Years' War, these Cossacks did not wear uniforms. The following description is very conjectural and based on the clothing of other Cossack units.

Caftans and waistcoats were often made of blue cloth. Their hair was cut in roundel. They wore a high bonnet of sheepskin. Coats of rank and file were girdled with an ordinary sabre strap or a belt of coarse fabric material. Leaders wore silken belt from Persia or Poland over the sabre belt. Sabre was worn over the waistcoat. Some cossacks, especially the rank and file had only a mustache, beard was less common. They wore woollen trousers, half boots of black Morocco leather or simple leather. The Cossacks trousers were similar to the Turkish ones, but much tighter.

Viskovatov, A. V., Historical Description of the Clothing and Arms of the Russian Army, Petersburg: 1900