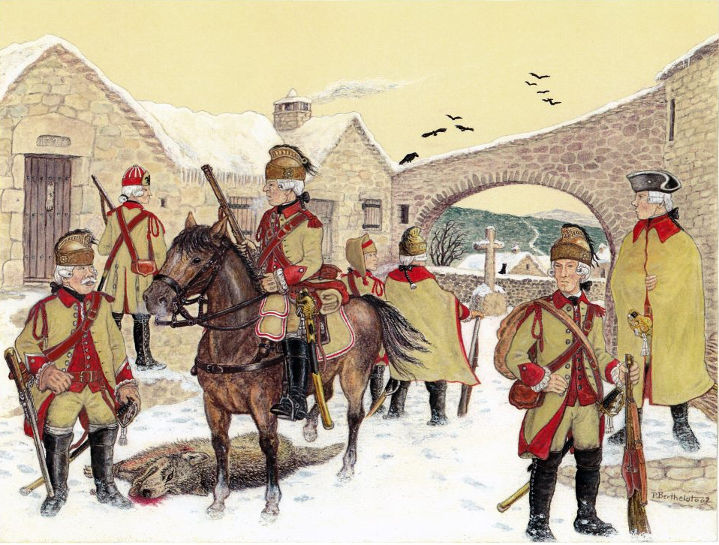 On March 13, 1759, upon request of the Duc de Broglie, d'Armentières sent forward a corps (1,400 foot and 1,200 horse, including the Volontaires de Clermont) under the command of d'Auvet. This corps took post at Hachenburg with detachments at Siegen. By April 26, the unit (about 1,200 men) was part of Broglie's Corps. In June, at the beginning of the French offensive in Western Germany, the regiment was part of the “Right Reserve” under the command of the Duc de Broglie who had taken position at Friedberg in Hesse. On July 6, the unit, along with companies of Grenadiers Royaux and some hussars, attacked Allied hussars posted at Halle and forced them to retire upon the Castle of Ravensberg (unidentified location) where the Hanoverian jägers and Prussian light infantry were posted. The French detachment advanced on the castle but was repulsed, loosing about 20 men. The Allies then reinforced their light infantry with 5 grenadier bns and 4 dragoon sqns. Seeing this, the French detachment abandoned Halle. On July 28, the unit was occupying Osnabrück which was attacked by a small Allied detachment under the command of Schleiffen. The Allies forced a gate and made themselves master of the town while the Volontaires de Clermont abandoned the place, leaving 2 guns, and retired on Hille and Münster. By September 25, during the Allied counter-offensive in Western Germany, the unit was attached to d'Armentières's Corps operating on the Lower Rhine. By October 25, the unit was posted at Dorsten and Marl.

In mid-April 1762, at the beginning of the [[French campaign in West Germany, the unit was part of Viomesnil’s detachment, which was posted near Wesel. In mid-May, the unit took position on the Issel. By the end of May, it was attached to the Army of the Lower Rhine under the Prince de Condé. On June 21, the unit attacked Scheither Corps (about 450 men) at Schermbeck, driving them back and capturing 50. On November 20, Louis XV issued his instructions regarding the French armies serving in Germany, specifying which units should return to France right away and which should stay in Germany till the final evacuation. The unit was among those which remained in Germany.