The full name of the unit was the Husaren-Eskadron der Volontaries Auxiliars de Bronswick which is very much a mix of French and German. It was formed in 1762.

The "Volontaires auxiliaires" consisted of 3 companies of grenadiers, totalling 417 men, and 3 squadrons, totaling 388 men, for a grand total of 805 men. The 3 squadrons consisted of:

In January 1763, this exotic unit was taken into Prussian service. Later that year disbanded and the men incorporated into the Magdeburg inspection infantry regiments.

At the beginning of August 1762, the whole war chest of the Türken-Corps was lost to the Volontaires d'Austrasie at Stadt Worbis in Thuringia.

The Gazette van Ghendt reports that, on August 27 1762, the Saxon Schill Jäger assaulted a Brunswig Turk and hussar party in the Erfurt area, killing some, taking prisoners a lieutenant and 26 men (also 30 horses). This is borne out by the Chronik von Erfurt(1).

Towards the end of June, some of the Türken (after having mistreated inhabitants of Gieboldehausen; 25 km NE of Göttingen) drove off some 70 cattle from there. Notably, the villains were fetched to Hameln and punished (together with the responsible officers) and the cattle returned (minus already slaughtered ones) to their owners(5).

On October 10, a small detachment of the Corps under a captain visited Duderstadt (25 km East of Göttingen) in order to requisition supplies for the besieging army before Kassel(5).

During the siege of Kassel in October, activities by the Türken-Coorps are found in notes of the pastor of Kirchditmold (then just outside north of Kassel)(4).

In November 1762, the Türken-Corps came under the orders of Major-General Freytag who then had 28 squadrons and 6 battalions of light troops under his command(2). On November 20, the Saxon Captain Schill with hussars and mounted jäger surprised a small detachment of Brunswig hussars and Türken which under the command of a captain had been forcefully collecting cattle in the Fulda and Würtzburg areas, having acquired some 100 heads. Some were cut down, some wounded and the captain and some 20 of his men taken prisoners, as were 30 horse. Schill then had the cattle returned to their original owners(3) (the location of this skirmish is given as 'Yhrsprünge'; this may be 'Urspring', part of Pretzfeld in Oberfranken).

Remark: In Begebenheiten...(5) there is a (civilian !) assessment of the Türken-Corps which translates to: "This Türken-Corps was a pack of villains who made it their business to rob and steal and could not be kept under control by their officers." 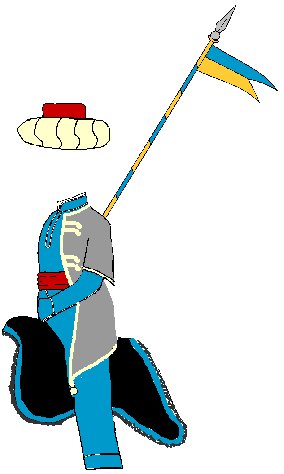 Uniform - Source: Ibrahim90 from a Not By Appointment template

Troopers were armed with a sabre, carbine and pistols.

Officers and NCOs were distinguished from troopers by golden laces.