On March 13, 1759, upon Broglie's request, d'Armentières sent forward a corps (1,400 foot and 1,200 horse, including the Volontaires de Flandres) under the command of d'Auvet. This corps took post at Hachenburg with detachments at Siegen. By May 10, the unit was part of the combined corps under the command of d'Auvet and de Ségur who had taken position near Deutz on the right bank of the Rhine. From June, the unit (estimated at 657 men) took part in the French offensive in Western Germany. On August 17, it was occupying an advanced positions in front of Naumburg with the Volontaires de Hallet when they were forced to retire into the woods towards Fritzlar by the advance of an Allied corps under the command of the Hereditary Prince of Brunswick. By August 31, the unit was attached to Chabot's Corps of light troops. By September 25, the unit was deployed at Grossen-Buseck near Annerod.

On March 25, 1761, during the Allied winter campaign in Hesse M. de Montchenu at the head of a detachment of his vanguard (Orléans Dragons brigade and mounted companies of the Volontaires de Flandre, Volontaires du Hainaut, Volontaires Étrangers de Clermont Prince and Volontaires d'Austrasie) drove the Allies out of the village of Mengsberg before catching up with Zastrow at Leimsfeld. Montchenu successfully engaged the Allied rearguard.

At the beginning of May 1761, as the French were preparing for a new campaign in Western Germany, the unit formed part of the corps of Prince Xaxier Comte de Lusace which had been assembled at Fulda. On July 13, the unit was part of the French Reserve posted at Sande, which was attacked by Luckner. As soon as Prince Xavier was informed, he sent 2 bns to support Chabot who was forced to repass the Lippe. In this action the French lost 150 men made prisoners. On August 14, the unit was part of Caraman's Corps, which took position at Ossendorf and covered the gorge of Hardehausen. On August 15, it took part in an affair near Dringenberg, where, along with Nicolaï Dragons and Chamborant Hussards, it countercharged the Allies, taking 2 officers and 60 men prisoners. On August 18, the unit was still part of Caraman’s Corps, which was attacked by the Hereditary Prince on the left bank of the Diemel, between Peckelsheim and Warburg. Caraman retired in good order and joined M. de Stainville on the right bank of the river. In this affair, Caraman lost 30 men and took about 30 Allied prisoners. On September 2, Stainville sent the unit to Carlsdorf. In mid-October, the unit deployed detachments in the vicinity of Warburg.

By March 1762, the unit was attached to the Army of the Upper Rhine under Soubise. On June 24, the unit was present at the Battle of Wilhelmsthal. On July 10, M. de Vaux marched from Göttingen towards Uslar where the Volontaires de Flandre, Volontaires du Hainaut and Volontaires d'Austrasie chased the few Allied troops occupying the town before attacking the woods where they took more than 500 prisoners, including a lieutenant-colonel. However, Luckner's Corps, marching from Dassel, rapidly came to the support of the Allies and M. de Vaux retired to Göttingen. On July 23, the unit was at Witzenhausen with Chabot’s Corps during the Combat of Lutterberg. On September 10, the unit was part of Stainville’s detachment, which marched along the Lahn up to Wetter. 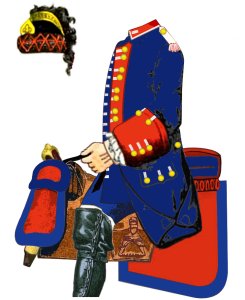