On December 8, 1758, Lieutenant-General Duke of Holstein-Gottorp was authorised to raise a Freikorps to serve with the Allied Army in West Germany. On December 20, Major von Trümbach entered in the Prussian service. The unit was raised on January 4, 1759 as "Freikorps von Trümbach" or "Volontaires de Prusse". It was financed by contribution raised in the Duchy of Bergh. The unit initially consisted of:

By March 1759, the unit had assembled in Minden. On April 25, the company of jägers, which had been raised in Soest by Captain Johann Friedrich Naumann, joined the unit. The unit then comprised:

On February 3, 1760, the Duke of Holstein gave orders to reorganise the dragoons of the unit in 2 squadrons of hussars placed under the command of Major Johann Bernhard von Bequignolles. Furthermore, a company of grenadiers was created. The musketeers and grenadiers received a new uniform while the jägers continued to wear the original uniform. On May 27 of the same year, a fourth company of musketeers was raised and the company of jägers under Captain du Pasquier was transferred to Frei-Infanterie Quintus Icilius. With these reorganisations, the unit now consisted of:

In January 1761, the 2 squadrons of hussars were transferred to the newly formed Frei Hussars von Bauer.

On November 23 1761, the unit incorporated a second battalion originating from the former Volontaires Wallons. With this addition, the unit consisted of 2 battalions, each consisting of 1 grenadier coy and 4 musketeer coys.

At the end of the war, the unit was incorporated into Westphalian infantry regiments of the Prussian army.

On April 13 1759, a detachment of the unit took part in the battle of Bergen where it was attached to the vanguard of the third column. In June, 1 battalion of 5 coys including 1 Jägers and 1 dragoon detachment of 54 troopers (total of 768 men) served with the main Allied army under the command of Ferdinand of Brunswick. On August 1, while an Allied force launched an attack on Gohfeld, a battalion was detached to Herford. The same year, the unit incorporated part of the troops of the disbanded Garrison Regiment XII Kalckreuth. At the end of November, 100 jägers of the unit accompanied the Hereditary Prince of Brunswick in his attempt against the Württemberger cantonments. On November 30, they took part in the attack on Fulda

On July 10 1760, 1 battalion and 1 squadron of the unit were present at the combat of Corbach where they were attached to the reserve under the command of Lieutenant-general von Gilsa. This reserve did not take part in the engagement. 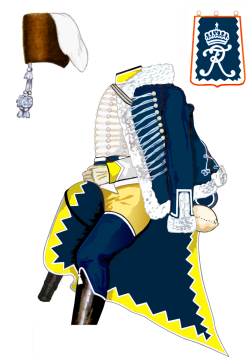 Uniform in 1759 - Source: Richard Couture from a template by Frédéric Aubert

Uniforms of the dragoons 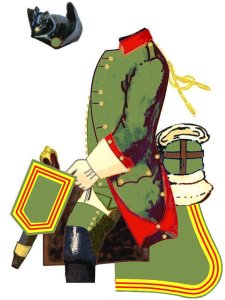 Uniform in 1760 - Source: Richard Couture from a template by Frédéric Aubert

Troopers were probably armed with a sword, a pair of pistols, a musket and a bayonet.

Uniforms of the Musketeers

Initially, the musketeers wore a uniform similar to the uniforms of jägers depicted below. However, they soon adopted a blue uniform with light blue facings. This second uniform was later replaced by a similar uniform with red facings.

In this section we depict the second uniform (blue with light blue facings).

Privates were probably armed with a short musket, a bayonet and a curved blade sabres.

Drummers wore a uniform similar to the uniform of the privates but with swallow nests (Prussian blue laced with a white braid with a central light blue stripe) on each shoulder.

Uniforms of the Jägers

Initially half the company was armed with rifles and the other half with muskets. Privates were also armed with a sword.

Officers had silver scalloped tricorne with black and white quartered pompoms, a black cockade fastened with a silver strap and a silver button. Their coats were similar to those of the privates but without shoulder strap or turnbacks. Furthermore, they had a silver aiguillette at the right shoulder.