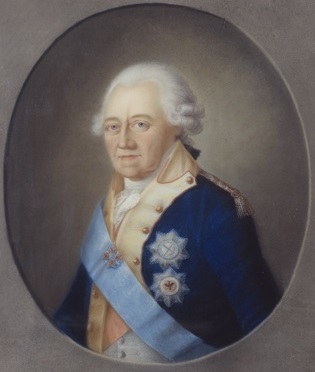 The family of the Dukes of Württemberg was a typical aristocratic family of that period, from which some members sided with Prussia, and others, with the Habsburg monarchy.

Friedrich Eugen was born on January 21, 1732 in Stuttgart. His father was Duke Alexander of Württemberg(1684-1737), also Imperial field-marshal and field-marshal of the district of Swabia; and his mother, Maria Auguste Princess of Thurn and Taxis.

As early as February 11, 1734, Friedrich Eugen was promoted to Imperial colonel (at the age of 2 years!); and on September 26, 1736, to colonel of a dragoon regiment of the Swabian district.

In 1741, Friedrich Eugen with his elder brothers Karl Eugen and Ludwig Eugen visited to the court of King Frederick II of Prussia. The intention of the king was, to attach the Württemberg family as much as possible to Prussia.

In 1749, his mother ceded her Prussian dragoon regiment (the latter DR No. 12) to her son Friedrich Eugen. The transfer was authorised by King Frederick II. Initially, Friedrich Eugen served, with the king’s approval, in the Gens d'Armes regiment. On May 1, 1750, he finally joined his regiment at Treptow. The effective commander of the regiment was at that time August Friedrich Marschall von Bieberstein, who was not so happy about the arrival of his very young “Chef”. After some misunderstandings between both, Bieberstein was replaced by Lieutenant-Colonel Friedrich Wilhelm von Seydlitz.

On November 9, 1752, Friedrich Eugen was promoted to major-general of the Swabian district, but retained his charge in the Prussian army. During the winter of 1752/53, Frederick II invited his young protégé to his court in Berlin. On April 19, 1753, after Friedrich Eugen engagement with the king’s niece, Friederike Dorothea Sophia von Brandenburg-Schwedt, Frederick made the Castle of Treptow available to him. On November 29, 1753, Friedrich Eugen married Dorothea Sophia. On December 15, of the same year the Prince von Württemberg was decorated by the military Schwarzer Adler Orden (Order of the Black Eagle).

In the spring of 1756, Friedrich Eugen went to Minorca to visit his elder brother, the French General Ludwig Eugen who was participating in the Siege of Fort St. Philip. However, he immediately returned to Prussia at the outbreak of the Seven Years’ War. On November 1, 1756, he was promoted to major-general in the Prussian Army.

On April 21, 1757, during the invasion of Bohemia, Friedrich Eugen distinguished himself in the Combat of Reichenberg. On May 6, he also fought with valour in the Battle of Prague. On December 5, he was at the Battle of Leuthen where he was promoted to lieutenant-general on the battlefield.

On February 9, 1758, Prince von Württemberg acted as an associate judge in the trial of Lieutenant-General von Lestwitz, von Katte and von Kyaw, because of their role in the surrender of Breslau.

At the beginning of March 1758, Friedrich Eugen was appointed commander of a corps operating in Upper Silesia. At the end of the year, he fell sick and the king authorised him to take a few months to recover at Schwedt. Frederick II. wrote to him:

A few days after Christmas, Friedrich Eugen was captured by a Russian patrol but was set free on “revers.”

On August 12, 1759 at the Battle of Kunersdorf, Friedrich Eugen led a division of 3 cuirassier regiments and was heavily injured.

In October 1760 in Berlin, the Prince von Württemberg was unable to defend the city against a raid conducted by an Austro-Russian corps and was forced to retire. In the following weeks, he drove the Imperial troops, commanded by his brother Karl Eugen, out of the region between the Saale and Elbe rivers. On November 3, in the Battle of Torgau, the Prince von Württemberg led a division of 5 cuirassier regiments, but was again heavily injured by a sabre stroke at the head. He spent the rest of the year in Mecklenburg and Pomerania.

During the Siege of Colberg, between August 24 and December 16, 1761. the Prince von Württemberg was commander of the troops defending the fortress in a camp in front of the harbour. In the night of November 13 to 14, he broke through the Russian blockade and safely reached Treptow with his troops.

On April 10, 1762, the Prince von Württemberg signed an armistice with the Swedes and marched to Schweidnitz. In the following Battle of Reichenbach, on August 16, he distinguished himself once more, leading a very successful cavalry attack.

After the war, the Prince von Württemberg healed the numerous wounds received during the Seven Years’ War, in the garrison of Treptow/Rega.

In 1769, the Prince von Württemberg resigned from the Prussian service and went to Mömpelgard (present-day Montbéliard in France).

On July 23, 1776, the Prince von Württemberg received the Russian Order of St. Anna.

During the French Revolution, French troops occupied Mömpelgard. In 1791, Friedrich Eugen left Mömpelgard (the county would be annexed to France).

The Prince of Württemberg then spent some time in Basel is Switzerland, Spaa and Wilhelmsbad. On June 1, 1792, he was appointed by the Prussian King Friedrich Wilhelm II as governor of the Margraviate of Ansbach-Bayreuth. After his promotion to Prussian Field-marshal on May 6, 1795, Friedrich Eugen lived in the Castle of Bayreuth.

On May 20, 1795, after the death of his elder brother Ludwig Eugen, Friedrich Eugen succeeded him as Friedrich I, Duke of Württemberg. The years of his administration were affected by the occupation of Württemberg by Imperial troops. After quarrels with the state parliament, Duke Friedrich Eugen von Württemberg died from a stroke on December 22, 1797 at Hohenheim near Stuttgart and was buried in the tomb of the castle chapel at Ludwigsburg.

Friedrich Eugen and his wife Friederike Dorothea Sophia von Brandenburg-Schwedt had 12 children. The most interesting being: