From about 1743, most European armies began to recognize that the artillery was an arm in its own right and that the guns to be used in the field artillery had to become lighter if they were to be effective weapons.

In 1734, Herzog (Duke) Carl Alexander of Württemberg (reigning from 1733 - 1737) founded the artillery of his army as a militarised organization rather than a guild. The unit was raised on March 24 1734. From this time on, the Artillery Inspector of the Hohentwiel fortress, Alexander Weiss, began to instruct young recruits in the business of serving guns.

On March 24 1736, the best of these men were organised into a company of foot artillery by General von Rennchingen. The uniform was a tricorn, red coat with black collar and cuffs, white breeches, long gaiters. The organization of 1736 was:

Apart from these artillerymen, infantrymen would be attached according to the operational situation as assistants.

In 1759, engineer officers and guides were also attached to the artillery, bringing its effective strength to about 300 men.

In 1765, the artillery unit was reduced to a single company.

At the beginning of 1757, Herzog Karl mobilized his 6,000 men contingent when the Holy Roman Empire declared war on Prussia. From October 23 to November 13 they took part in the siege of Schweidnitz. On November 22, they were in action at the battle of Breslau, on December 5 in the battle of Leuthen. They went into winter quarters in Bohemia.

In April 1758, the Württemberg contingent was called back home. On July 9, the contingent (13 battalions with their regimental pieces) moved out again, this time to Cassel, to join French prince de Soubise's corps. On October 10, they fought at the battle of Lutterberg, after which the enemy withdrew to Münden. They then went into winter quarters around Cassel and went home in mid-December.

In August 1759, the contingent formed up at Ludwigsburg. It consisted of three grenadier battalions, six infantry regiments, 13 squadrons of cavalry and 15 guns, the latter with 174 men and 99 drivers. It was divided into three brigades, the artillery being in the 1st Brigade. At the end of November, the contingent was ordered to the Fulda area, then to Marburg, to prevent the enemy advancing to Cassel. 13 guns were stationed at Marburg. Some troops, with two guns, went on to Hersfeld and Lauterbach; others went to Schliz and Bach. In the night of November 29/30, the detachment at Fulda learned that there was enemy movement to their front. A patrol of all arms, with two guns, was sent out; they were defeated and fell back to a position between Fulda and Kohles. When the Allies launched an attack on Fulda, the Württembergers were pushed back to Motten, losing two guns. The contingent eventually concentrated at Rheineck.

In January 1760, the contingent of Württemberg went into winter quarters at Brückenau, returning home in May. In this year, Württemberg's contingent was concentrated in a camp at Heilbronn. It consisted of four infantry and two cavalry brigades, with a battalion of artillery. This battalion was commanded by Oberst von Leger, it had 600 men and forty 3-pounder guns, which were distributed to the infantry battalions. On July 29, they left the camp to advance on Schweinfurth and Gotha. On August 30 they reached Sondershausen, having been involved in several clashes on the way. On September 1, they moved on to Heringen. From here they struck out at Ilefeld, where they clashed with the enemy, capturing two guns. On September 4, they moved out to Merseburg and on to Leipzig, then Halle. On September 17, the heavy baggage of the corps (including supplies for the artillery) joined them there. On September 30, they marched to Pretsch, where they crossed to the right bank of the River Elbe on a pontoon bridge. Next day, they were heavily attacked by the enemy and forced to recross the Elbe on the pontoon bridge. On September 30, they arrived at Wartenburg on the Elbe and next day moved on to Prata. On October 2, they were involved in a clash at Braunsdorf and Dobien. On October 13, the Württemberg contingent moved off to Gräfenhainchen, on October 17 they were at Dessau, on October 21 at Halle, then withdrew into Leipzig via Merseburg on October 25. On October 30, they went to Eythra, then set up camp at Lindenau, until 1 November, when they moved to Naumburg; on November 21 to Erfurt, on November 22 to Arnstadt. On December 7, they set off for Römhild, Schweinfurth, Ellwangen, through Stuttgart to the artillery depots at Ludwigsburg and Hohenasperg on December 16.

This completed their actions in this war.

Throughout the war, some artillerymen also served alongside the Württemberger contingent forming part of the troops contributed by the Swabian District to the Reichsarmee.

In 1758, when the unit was increased to a full battalion, the uniform coat was changed to dark blue. 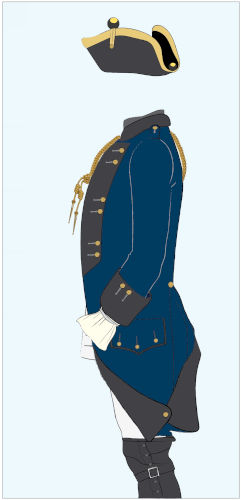 Troopers were armed with a sword.

This unit did not carry any colour.

In 1763 the artillery had 115 bronze cannon, 73 iron pieces and 29 Pétards; these were stored in the various arsenals and fortresses in Esslingen, Hohentwiel and Ludwigsburg. No technical details are known of the guns, the ammunition or of the ballistic performances of the various pieces. Calibres were 24-, 12-, 6- and 3-pounder. They were probably Austrian guns.

Gun carriages were of the old Austrian type.

The gunners were trained according to the 'Swabian Regulations'. Joint training exercises, together with the infantry and cavalry, were held for the first time in 1762.

This article is mostly a translation by Digby Smith of a section of the following book which is now in the public domain: