The regiment was raised in 1675 by Colonel Gordon. It initially consisted of two squadrons.

During the Franco-Dutch War (1672-78), the regiment was among the troops assembled on the frontier.

In 1679, the regiment participated in the relief of Hamburg, threatened by the Danes.

In 1685, the regiment formed part of the relief corps under the command of the Hereditary Prince Georg Ludwig von Hannover to fight the Turks in Hungary; and took part in the Battle of Gran and in the storming of the Fortress of Neuhäusl. In 1686, the regiment participated in the siege and capture of Ofen; in 1687, in the Battle of Mohács

In 1702, the regiment took part in the invasion of the Principality of Braunschweig-Wolfenbüttel.

During the Seven Years' War, the regimental inhabers were:

On June 26 1757, during the French invasion of Hanover, the regiment took part in the Battle of Hastenbeck where it fought in the second line of the cavalry right wing. The cavalry was not really tested in this battle. It was superbly mounted but drilled in the old German style tactics which meant that they were steady, but slow. They would have charged at a trot and quite likely would have received an enemy charge at the halt relying on their firearms.

In June 1759, the regiment was part of Wangenheim's Corps who had taken position at Dülmen in Westphalia to observe the movement of a French Corps under the Marquis d'Armentières. On August 1, the regiment took part in the Battle of Minden where it was deployed in Wangenheim's Corps between Kutenhausen and the Weser, in the second line of the cavalry right wing under Major-General von Grothausen. In this battle, Lieutenant Helmers was wounded.

On February 15 1761, the regiment was among the Allied forces who launched a surprise attack on Langensalza against the Saxon Contingent fighting alongside the French Army. On July 16, the regiment was posted at Herzfeld on the left bank of the Lippe with part of Spörcken's Corps. It did not take part in the Battle of Vellinghausen. 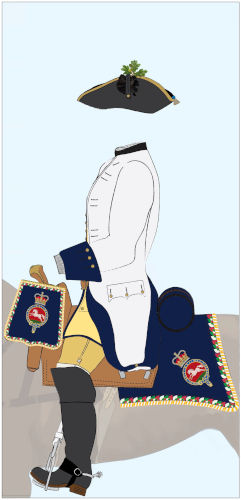 Officers wore a yellow silken sash around the waist; a silver gorget, a silver porte-epee; gold lace on the tricorne; gold lace around the collar and cuffs. They did not carry any cross-belt.

NCO had gold laces on the cuffs, pockets, and waistcoat. They did not carry any cross-belt.

The musicians were kettle-drummers and trumpeters. They were probably dressed in reverse colours and probably had swallow nests at the shoulders. Staff trumpeter probably carried NCO distinctives.

The kettle-drum apron and trumpet banners were white, probably fringed gold, carrying the Springing White Horse on a red ground within the Garter; the motto “NEC ASPERA TERRENT” underneath. 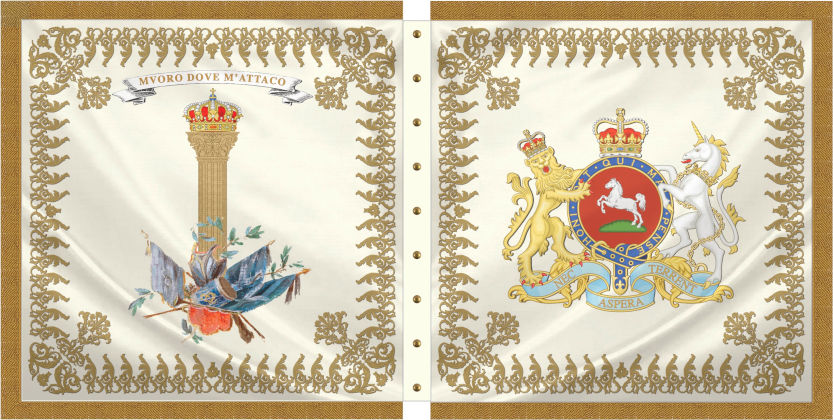 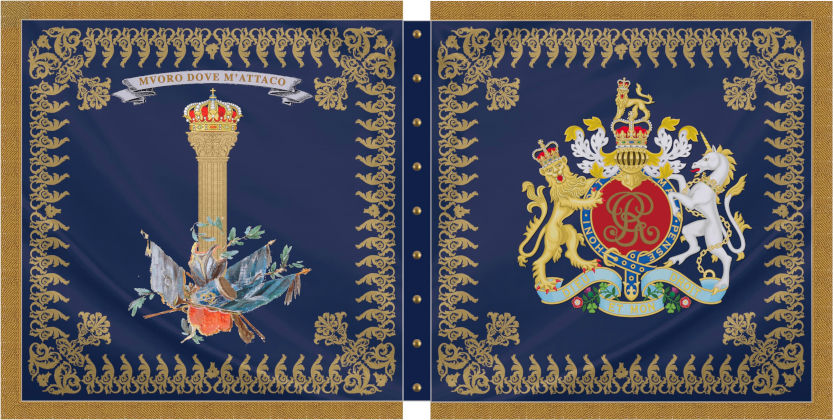