In 1751, the regiment was reorganised and then consisted of two companies of grenadiers and four battalions, each counting five companies of fusiliers of 200 men.2

From 1756, the regiment had no Chef and was only known as the “Warasdiner Creuzer Grenz-Infanterie-Regiment”.3

Tactically a Grenz-Husar squadron was assigned to a foot battalion of the same Generalate.5

The regiment recruited in the western part of the Generalate of Warasdin (present-day Varaždin) in North Croatia.6 Its regimental staff was located in Creutz (present-day Krizevci) in Slovania.7

Regimental numbers were introduced only in 1769 when this regiment was designated as "I.R. 64".

Service during the War8 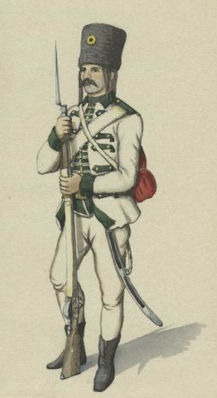 By mid September 1756, one battalion of the regiment was part of Beck's detachment who reinforced Piccolomini's Corps operating in Moravia. On October 8, this battalion accompanied FML Spada who marched to Sadowa (present-day Sadová) to put a stop to the depredations of the Prussians on the right bank of the Elbe.

At the opening of the campaign of 1757, one battalion of the regiment was attached to Serbelloni's Corps. On April 21, at the beginning of the Prussian invasion of Bohemia, there was one battalion of the regiment in the vanguard of Count von Königsegg at the Combat of Reichenberg. On April 28, a battalion accompanied Major-General Gemmingen to Königinhof (present-day Dvůr Králové nad Labem). On May 6, the first battalion of the regiment took part in the Battle of Prague where it was deployed in the Reserve in Count Petazzy's Brigade. During the battle it was sent to occupy the Heights of Hloupetin which were attacked by a large Prussian force. After the battle, it took refuge in Prague. On August 3, when the Austrian Army proceeded to the invasion of Silesia, the same battalion under Major Bauer defended Striegau (present-day Strzegom) against Kreytzen's Corps for six hours before capitulating under the condition of free withdrawal. On August 13, it was present at the Combat of Landeshut. Meanwhile, on May 6, the second battalion, under Lieutenant-colonel Franz Baron von Riese, distinguished itself in the capture of Altbunzlau (present-day Brandýs nad Labem-Stará Boleslav) where it attacked the left gate. By mid June, this second battalion and its grenadier coy (totalling 700 men) were part of Beck's Brigade. On June 18, this second battalion fought in the Battle of Kolin where it was deployed in the village of Pobor in the first line of the extreme right wing under General Nádasdy. On September 7, when General Nádasdy attacked Winterfeldt's corps isolated in the Combat of Moys, the two field battalions of the regiment were with the vanguard in front of the right wing under the command of Lieutenant-General Petazzi. In November, Captain Katinčiċ of the regiment captured Bevern while he was reconnoitring the country near Breslau. In December, these battalions took part in the defence of Breslau and 1,174 men became prisoners of war when the garrison deposited arms on December 21.

At the beginning of 1758, the battalions were exchanged. On April 20, during the Prussian invasion of Moravia, part the regiment was attached to Colonel Brentano's light troops who launched a surprise attack on Frei-Infanterie de Angelelli at Liebau (present-day Lubawka), capturing 4 officers, 47 men and 5 guns. On August 4, a detachment of the regiment took part in an engagement near Horschitzka (present-day Hořičky). On October 14, part of the regiment was at the Battle of Hochkirch where it was attached to Loudon's Column to the southwest of Hochkirch.

On April 15 1759, part of the regiment participated in an engagement near Sebastiansberg. By mid-August, during the Austro-Imperial campaign in Saxony, one battalion of the regiment was attached to Hadik's Corps. On September 21, this battalion took part in the Combat of Korbitz where it was deployed on the left wing of Hadik's Corps under Major-General Brentano. By October 1, a battalion was encamped at Tannenberg as part of Brentano's Corps. On December 3 and 4, a detachment of the regiment formed part of Beck's Corps who attacked an isolated Prussian force and captured part of it at the Combat of Meissen. In this combat, Major Fontaine and Major Guttenberg of the regiment distinguished themselves.

In 1760, part of the regiment served in Saxony. In the night of July 4, detachments fought in the Forest of Lichtenberg. In September, during the Russian campaign in Brandenburg, the battalion of Major Eder followed Lacy in his advance on Berlin.

In 1761, the regiment did not take part in any major action.

The illustration at the beginning of our article is based on Wrede's description while the following sections are based on the illustrations in the Delacre Bilderhandschrift and Albertina Handschrift.

Until recently we had no information on the uniform worn by the Grenzer light troops at the outbreak of the Seven Years' War. Thanks to the kind authorisation of the Heeresgeschichtliches Museum in Vienna, Vladimir Brnardić, a member of our group, has had access to the Delacre Bilderhandschrift, a rare contemporaneous manuscript depicting the uniforms of the entire K. K. Army around 1756-57. For this reason, we present the uniforms of troopers circa 1748 and in 1762. 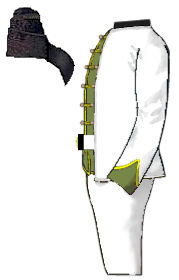 Uniform in 1748 - Source: Dal Gavan from a template by David at Not By Appointment

N.B.: the uniforms may have had frogging and barrel sashes, but they are not shown in the Delacre Bilderhandschrift. 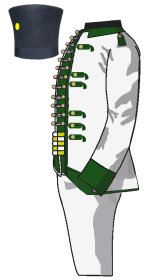 Privates were armed with a slightly curved 58 cm long brass hilted sabre25 with a white knot and a cord of a different colour for each company; a Model 1754 musket (151 cm long, 112 cm long barrel, 18,3 mm calibre, 4,9 kg); and a bayonet. Each soldier carried 36 musket balls and 6 shrapnel bullets.26 Privates also carried a haversack and a canteen. Additional ammunition and kettles were transported in the wagons of each company.

The Bautzener Bilderhandschrift of 1762 illustrates a slightly different uniform:

Donath illustrates green decorations (Schoitasch) on the trousers; yellow edging and yellow braids on the dolman; a white and yellow barrel sash.

Officers wore uniforms of the same colour as those of the privates but were distinguished by a black tricorne laced gold with a green and white cockade; a Western style coat with vertical pockets, plain cuffs, no turnbacks; a green dolman edged and braided in gold; and yellow Hungarian boots.

Officers wore a black and gold sash or a gold sash with tassels at the waist, over the dolman and under the coat. The black and gold sash could be made of strictly separated layers and then intertwined in knots or in a kind of knitwear; while the entirely gold sash was made of heavy knit of fine shiny silk.27