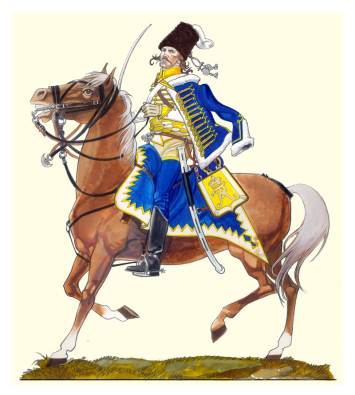 The first 5 squadrons of the regiment were raised in 1740 from 2 squadrons contributed by the 1st Hussar and from new recruits under the command of Colonel Friedrich Asmus von Bandemer.

During the War of the Austrian Succession (1740-48), soon after its creation in 1740, the regiment went into action. On August 1, it was ambushed at Kloster Leubus, suffering heavy casualties. In 1744, it served against the rebels in Upper and Lower Silesia. On November 27, it took part in a skirmish near Plesse where it attacked a force of Austrian cavalry, taking over 200 prisoners. In 1745, at the skirmish of Gross-Strehlitz, it defeated a superior Austrian cavalry force, taking almost 300 prisoners. On September 28 at the skirmish of Oderberg, it overthrew an enemy dragoon regiment and took a standard and over 100 prisoners.

By 1806, the regiment was known as von Pletz Hussars. On October 14, it took part in the Battle of Iena. It then joined Blücher's Corps and surrendered at Ratkow on November 7. On November 22, a last detachment surrendered in Hameln. The regiment was not re-raised. Some survivors of the battle in Silesia went to form part of the 2nd Silesian Hussars and of the 6th Hussars in 1808.

In 1756, the regiment was part of the army of Silesia under Field-Marshal Schwerin. During this campaign, this army undertook minor operations in Eastern Bohemia.

In April 1757, the regiment was part of the Prussian Army who proceeded to the invasion of Bohemia. On May 3, it fought in a skirmish near Alt-Bunzlau, scattering over 1,500 Grenzers but losing its commander, Colonel Wartenberg, killed in action. On May 6, the regiment took part in the Battle of Prague where it was deployed in the Reserve under General von Zieten. When the Reserve dispersed the entire Austrian cavalry, Prince Charles tried to rally some Austrian cavalry units but the regiment along with Stechow Dragoons attacked and broke these units. During this battle, the regiment fought on the left wing and repelled the Austrian cavalry three times. On June 18, the regiment took part in the Battle of Kolin where it was deployed in the cavalry vanguard at the extreme left under General von Zieten. When the Prussian right wing collapsed, it covered the retreat of the army. At the end of October, 7 squadrons of the regiment were part of the defensive force during the Siege of Schweidnitz and were taken prisoners, including their colonel (von Warnery), when the fortress surrendered on November 14. On December 5, at the Battle of Leuthen, the remaining 3 squadrons were deployed in the vanguard which attacked the Austrian left flank.

In March 1758, at the beginning of the campaign, the regiment took part in the invasion of Moravia and, from May to July, covered the Siege of Olmütz during which it fought in the skirmish near Landskron, overthrowing an enemy cavalry force. The regiment was later dispatched to counter Swedish operations in Pomerania. On September 26, 5 squadrons of the regiment took part in the attack of a Swedish foraging party at the Combat of Tarmow. They charged and routed the Smålands Horse, losing 1 officer and 30 men in this action. Two days later, on September 28, these same squadrons took part in the failed attempt to capture Fehrbellin.

On August 12, 1759, 6 squadrons of the regiment fought in the Battle of Kunersdorf where they were deployed in the Reserve of the right wing as part of Meinicke's Division. On October 29, the regiment took part in a skirmish near Pretsch. On December 3 and 4, 3 squadrons of the regiment were attached to a small isolated Prussian force under Major-General Dierecke who had taken post at Meissen. This small corps was attacked by a much stronger Austrian force and, during the combat of Meissen, forced to retire.

From July 13 to 22, 1760, the regiment covered the Siege of Dresden. On Sunday August 3, when Frederick resolved to march towards Silesia, the regiment formed part of the rearguard of the first column. On August 15, it took part in the Battle of Liegnitz where it was deployed on the right wing in front of the first line. On September 17, the regiment was at the Combat of Hohengiersdorf. On November 3, it was at the Battle of Torgau but did not take part in combat, being detached to guard the army train. On November 4, it fought in a skirmish near Zobten. 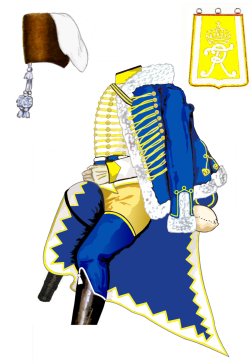 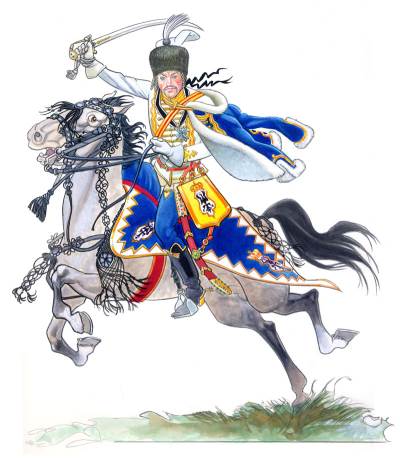 The officers' pelisse was trimmed with white fur and laced with a wide golden braid around the braids on the breast.

Trumpeters of the regiment wore a black mirliton with black and white cords, knots and tassels and a white plume tipped blue instead of the kolback.