The regiment was created on May 29 1698 from half of the Metternich Regiment for Reichsgraf (Imperial Count) Franz Joseph Sebastian von Thürheim. It counted 1,800 men in 12 companies.

In January 1720, the battalions stationed in Hungary were transferred to the Rhine. The whole regiment was concentrated at Freiburg.

During the War of the Austrian Succession, the regiment took part in several campaigns. Its proprietor was at that time Feldzeugmeister Duke von Aremberg.

Regimental numbers were introduced only in 1769 when this regiment was designated as "I.R. 28".

On May 6 1757, two battalions of the regiment took part in the battle of Prague where they were deployed in Baron Unruhe's Brigade, in the second line of the left wing of infantry under Baron Kheul. In this battle, the regiment lost 33 men killed; 5 officers and 60 men wounded; and around 300 men missing. After the battle, 7 officers, 24 grenadiers and 753 fusiliers took refuge in Prague while Captain Baron Burmann rallied among the missing men 2 officers, 111 grenadiers and 173 fusiliers around Beneschau (present-day Benešov/CZ) and marched with them and 700 men from various regiments to Olmütz. On September 7, when General Nádasdy attacked the isolated corps of Winterfeldt in the Combat of Moys, the first battalion of the regiment was deployed in the second line and the second battalion in the third line of the infantry centre division under the command of Lieutenant-General Nicolaus Esterházy. Captain Peter Franz Piza and the grenadiers distinguished themselves. At the beginning of November, a detachment of 200 men led by Major Fischer participated in the siege of Schweidnitz. After the capture of the fortress, 50 men remained at Schweidnitz while the regiment (only one battalion with 1,200 men) returned to the main army of Prince Charles de Lorraine. On November 22, this battalion took part in the Battle of Breslau where it was part of the Reserve Corps in Baron Otterwolf's Brigade. In this battle, it lost 4 men killed; and Lieutenant-Colonel Gemmingen, 3 officers and 32 men wounded. The regiment then formed part of the garrison of Breslau. In December, it took part in the defence of Breslau. At the capitulation of the fortress, the garrison became prisoners of war. At the end of the year, the regiment only consisted of its third battalion posted at Termonde in the Austrian Netherlands and of some 200 untrained recruits stationed at Königgrätz.

By mid-1758, the two field battalions had been re-established and were part of Daun's Army. By August 2, they were part of the reserve of the main Austrian army under the command of Daun near Jarmeritz. Daun was following up the Prussian army retiring through Bohemia after the failure of the Prussian invasion of Moravia. At the end of the year, the regiment counted 1,750 men. It took up its winter-quarters at Adler-Kostelec (present-day Kostelec nad Orlicí/CZ), Potenstein (present-day Potštejn/CZ), Castolowic (present-day Častolovice/CZ) and Doudleb (present-day Doudleby/CZ).

On April 1 1759, the regiment was allocated to FZM Harsch's Corps posted near Skalic (present-day Skalice/CZ). In July, it set off from Skalic and marched to Trautenau (present-day Trutnov/CZ). In August, a part of this corps (including Wied Infantry) was allocated to the main army posted near Marklissa. On October 28, as part of the Corps de Reserve of FZM Duke Aremberg, the regiment marched to Wittenberg and – after a skirmish with Prussians near Sackwitz – on October 30 to Eilenburg. On November 20, the two field battalions and the grenadiers took part in the Battle of Maxen where they were deployed in the first line of the second column of Sincère's Corps under the command of Lieutenant-General Dombasle. In this battle, the regiment lost 16 men killed; 6 officers and 58 men wounded; and 8 men missing. The commander, Colonel Sigmund Baron von Gemmingen received the Maria-Theresia-Order for his conduct. The regiment initially took up its winter-quarters near Dippoldiswalde, but on January 19 1760, it was relocated at Ober-Nauendorf, Rabenau, Eckertsdorf and Klein-Oelsa.

At the beginning of June 1760, still attached to FZM Aremberg's Corps, the regiment (now 1,137 men) left its winter-quarters and joined Daun's Army at Plauen. On July 18, Daun arrived near Dresden which was besieged by Frederick II. On July 19, one battalion and the grenadiers participated in an attack against a Prussian corps near Loschwitz. The Prussian were driven behind the Elbe River and 1;000 Prussians were taken prisoners of war. On July 28, the Prussians lifted the siege of Dresden and marched towards Silesia. Daun with his army followed them through Bautzen. On November 3, the regiment took part in the Battle of Torgau where it was posted on the right wing next to Puebla Infantry. When 6,000 Prussians attacked, both regiments initially retreated, but – supported by Kaiser Infantry, Neipperg Infantry and Gaisruck Infantry – they counter-attacked and drove the Prussians back. Afterwards, the Austrian infantry was charged by the Prussian cavalry and Wied Infantry suffered heavy losses (3 officers and 108 men killed; 16 officers and 168 men wounded; 8 officers and 272 men taken as prisoners of war). The regimental colours were captured by a Prussian cuirassier regiment. The Austrian army retired to Plauen and the regiment (now only 560 men) took up its winter-quarters at Geising and Lauenstein near the Bohemian border. On April 23, the third battalion, led by Major Piza, had left the Austrian Netherlands and had marched to Prague and then to Linz where it guarded Prussian prisoners of war.

On May 8 1761, the regiment (now counting 1,500 men) went to the camp of Plauen where it remained until October. In November, several detachments of the regiment operated from Freiberg. Colonel Gemmingen was sent by Prince Albrecht von Sachsen against Döbeln, occupied by a Prussian force under Colonel Kleist, to persuade them to give up the city. On November 16, Kleist left Döbeln. The second battalion and the grenadiers spent the winter at Brand while the first battalion was quartered at Gersdorf near Rosswein.

At the beginning 1762, the regiment was at Dippoldiswalde, allocated to FML Buttler's Division. On September 27, Buttler attacked the Prussian positions at Cunnersdorf and Häckendorf. Then, on September 29, he attacked the Prussians near Pretschendorf. The entire regiment distinguished itself in this combat (Major Peter Piza and Captain Emanuel Fassignies de Gaillard later received the Maria-Theresia-Order for their conduct) but lost 10 men killed, 50 wounded and 92 missing. On October 14 and 15, the regiment fought in engagements near Freiberg. On October 29, the regiment took part in the Battle of Freiberg where it was surrounded and taken prisoners (5 officers and 385 men) by the Prussians during its retreat.

In 1763, the regiment assumed garrison duty in Moravia: its field battalions and its grenadiers were at Nikolsburg (present-day Mikulov/CZ). In 1766, the regiment was transferred to Vienna. 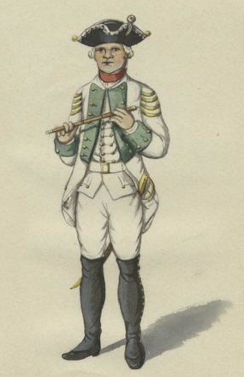 Until 1760, despite the new regulation of 1755, the musicians probably wore coats of reversed colours with white swallow nests, white lapels, white cuffs and white turnbacks. From 1760, they wore uniforms identical to those of the privates with green swallow nests on the shoulders. The drum had a brass barrel decorated with black flames at the bottom and with a black double headed Eagle on a yellow field. Rims were decorated with red and white diagonal stripes. The bandolier was white.

Michael Zahn for gathering information about this regiment