The regiment was created by a Lettre de cachet issued on December 5, 1673. Even though this regiment was considered a Swiss regiment, an entire company belonged to the town of Mulhouse (a free town allied to Switzerland). The command of this company was always assumed by a gentleman of this town. During the last years of its existence, this regiment consisted almost entirely of French subjects from the District of Sudgau, the County of Ferrette, the region of Jura, the Principality of Montbéliard and the District of Delamont.

In 1684, the regiment formed part of the army who covered the siege of Luxembourg.

In 1733, during the War of the Polish Succession (1733-35), the regiment served on the Rhine. In 1734, it took part in the siege of Philisbourg. In 1735, it garrisoned Stenay while its grenadiers took part in the Battle of Klausen.

In 1736, the regiment was stationed in Valenciennes where it remained until 1741.

In 1741, during the War of the Austrian Succession (1740-48), the regiment garrisoned Valenciennes and Lille. In 1743, two of its battalion were at Valenciennes and the third was at Condé. In 1744, it occupied Longwy and Montmédy. In 1745, the third battalion occupied Maubeuge while the two other ones took part in the siege of Tournai, guarded the bridge on the Scheldt during the Battle of Fontenoy and participated in the capture of Oudenarde, Ostend and Nieuport. In 1746, it was at the sieges of Bruxelles and Antwerp, and at the Battle of Rocoux. In 1747, the regiment was sent to Bretagne. In 1748, it took part in the siege of Maastricht.

During the Seven Years' War, the regiment ranked 55th and was under the command of:

Somewhere between August 23 and September 6 ,1757, the regiment joined the Army of Saxony, led by the Prince de Soubise, in the area of Erfurt and Eisenach for the planned reconquest of Saxony. On September 27, it was brigaded with Touraine Infanterie under M. de Waldner in the first line of the left wing of the Franco-Imperial Army. On November 5, under the Comte de Lorges, it took part in the disastrous Battle of Rossbach where it was placed in the second line of the centre. In this battle, it lost Lieutenants Prebel , Appenthal and Buren, killed; Lieutenant-Colonel Paraviccini, Commandant Galatti, Captains Perrier, Suriet, Bize, Zinck, Reynold, and 6 lieutenants wounded. At the end of the year, it took its winter-quarters in Offenbach in Hessen.

In March 1758, when the Allies launched their surprise winter offensive in western Germany, the regiment retreated towards Düsseldorf and Deutz with the bulk of Broglie's Army. It passed the Rhine on April 3 and 4. In the first days of June, as a French army prepared for an offensive in Hesse, the regiment was part of a detachment under the command of Broglie who followed up Ysenburg during his retreat. By July, it had joined Soubise's Army assembling near Friedberg in Hessen. On July 23, the regiment took part in the Combat of Sandershausen where it was placed in the first line of the right wing and was engaged against the Hessian units occupying the Ellenbach Woods. In the morning of September 27, the regiment entered into Kassel to prevent its capture by an Allied Army under the command of Oberg. On October 10, it was present at the Battle of Lutterberg where it was placed in the centre of the second line.

On January 3, 1760, the regiment was part of the force under M. de Voyer who occupied the town of Dillenburg. On January 7, Ferdinand of Brunswick, wanting to dislodge this force, established on his right flank, marched to Gladenbach where he joined Wangenheim's Corps and then advanced in three columns against Dillenburg. The Allied centre column advanced directly on Dillenburg and attacked Waldner Infanterie whose Lieutenant-Colonel Paraviccini was severely wounded. During this action, the Allies took about 700 prisoners. A few companies managed to escape and continued to serve in Germany. By May 23, the regiment was assigned to garrison duty in various places of western Germany. By December 30, the regiment had taken its winter-quarters in Frankfurt.

On June 24, 1762, the regiment took part in the Battle of Wilhelmsthal where eight of its officers were taken prisoners. On September 21, it fought in the Combat of Amöneburg. 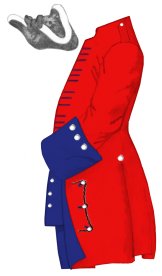 An illustration entitled "Swiss troops' uniforms of the late 18th Century by an unknown master" kept at the Musée de Penthes, illustrate an officer, a private and a musician of Waldner Infanterie around 1776. At this time the uniform was quite different from the 1758 uniform. However, it is interesting to note the differences of the uniforms of musicians compared to those of privates:

Since Waldner was colonel of the regiment until 1783, we can reasonably assume that the musicians of the regiment were similarly distinguished from the privates in 1758. Thus applying the above mentioned differences (except lapels) to the 1758 uniform would probably be a good approximation.

Reggie Davis for the description of the uniforms of musicians.