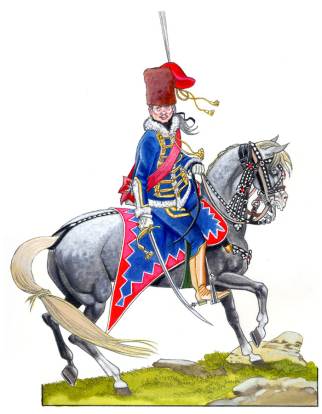 The first company (71 men) of the regiment was raised on September 30, 1730 from a draft from the cavalry and infantry regiments and from new recruits under the command of Lieutenant-Colonel Egidius Arend von Beneckendorf. A second company was added on March 1, 1731, a third on October 1, 1732 and in October 1733, they were increased to 3 squadrons.

On June 1, 1736, King Friedrich Wilhelm I declared this unit to be his “Königliches Leibkorps Husaren” and in November 1740, 3 more squadrons were added from the 1st Hussars. Finally, on July 24, 1741 in Silesia, the regiment absorbed the Prussian Husarenkorps of Colonel Bronokowski to bring its total strength to 10 squadrons in 2 battalions.

The regiment was often referred to as Die Roten (the Reds), later die Zieten (the Zietens).

Until 1802, the regiment had no recruiting canton, its recruits coming from Markgraf Carl Infantry and Kalckstein Infantry. On the eve of the Seven Years War, the garrison place of its 1st Battalion was Berlin while its 2nd battalion garrisoned Parchim, Plau, Lübs and Eldena in Eastern Pomerania.

From July 24, 1741 till his death on March 1, 1786, the regiment was under the command of General Hans Joachim von Zieten

The numbering system (Stammliste) was first used by Leopold I., Fürst von Anhalt-Dessau (Der alte Dessauer) in the Dessauer Spezifikation from 1737. Around 1780, the numbers were used in the printed Stammlisten. It became official by "Cabinets-Ordre" from October 1, 1806. The present hussar regiment was attributed number 2. 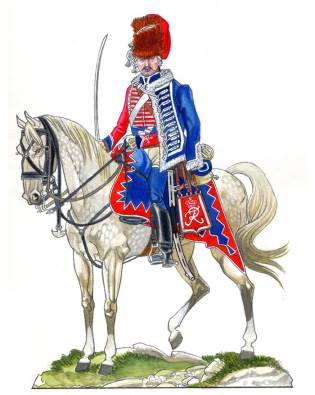 On August 26 1756, when the Prussian army was ordered to proceed to the invasion of Saxony, the 9 squadrons of the regiment were part of Ferdinand of Brunswick's column which had concentrated at Halle and advanced unopposed through Leipzig, Chemnitz, Freyberg and Dippoldiswalde, to the village of Cotta (reached on September 9) south of the Elbe near Pirna. The remaining squadron was part of the centre column led by Frederick II. More precisely, it belonged to Keith's Corps. The centre column had concentrated at Brietzen and advanced unopposed upstream along the Elbe river by Torgau, Wittenberg, leaving Meissen to its left. On September 6, it encamped at Rothschönberg and finally reached Wilsdruf. From September 10 to October 15, the regiment took part in the blockade of the Saxon army in the camp at Pirna. On September 22, it was at the combat of Lang-Hennersdorf. When Keith's army retired from Lobositz at the end of October, part of the regiment was posted on the left of the rear at some distance, protecting the Prussian army against any initiative of the Austrian light troops. The regiment then remained at Linai from October 23 at night till October 25 to cover the rear of the retiring Prussian army.

On May 2 1758, during the invasion of Moravia, the regiment took part in the skirmish of Littau; on May 22, it was at the skirmish of Konitz; on June 28 at the disaster of Domstädtl; and on July 12, at the skirmish of Hohenmauth. On July 26, during the Prussian retreat after the failed invasion, the regiment covered the right flank of the Prussian army encamped near the bridge of Jasena. On July 29, it covered the crossing of the Mettau by the main army and took part in the skirmish of Czernilow. On August 10, the regiment was part of the corps who accompanied Frederick when he marched from Silesia to join Dohna to contain the Russian invasion of Brandenburg. On Tuesday August 22, this corps made a junction with Dohna at Manschnow. On August 23, one of the squadron of the regiment was among the first Prussian unit to cross the Oder. On August 25, they fought at the Battle of Zorndorf where they were part of the fourth Prussian column. During the battle, led by Seydlitz, they counter-charged and overwhelmed the Russian cavalry. They then reformed and charged the flank and rear of the Russian infantry slaughtering them. On August 26, the regiment was detached to Lower Lusatia to prevent the incursions of Austrian light troops under Baron Loudon. On October 14, it took part in the Battle of Hochkirch where it was initially deployed en potence on the right flank between Steindörfel and the Birkenbusch. The previous night, its troopers had kept their mounts saddled. This allowed to react quickly to the first Austrian attack and to rescue Prussian prisoners before being forced to retire. Around 7:00 a.m., the regiment was among Zieten's Corps when it charged the Austrian grenadiers, thus preventing the Austrians from turning the Prussian right flank. On October 30, the regiment was part of Frederick's rearguard during his march to relieve the besieged Fortress of Neisse. This rearguard repulsed an attack by Loudon's light troops near the village of Pfaffendorf. On November 1, it fought in a skirmish along the River Queiss.

On March 26, 1759, the regiment took part in a skirmish at Greifenberg. On July 23, 5 squadrons (500 men) of the regiment took part in the Battle of Paltzig where they were attached to Normann's brigade deployed in the first line of the cavalry right wing whose attack could not prevent the defeat. A few weeks later, on August 12, 5 squadrons of the regiment fought in the Battle of Kunersdorf where they were deployed in the reserve of the right wing as part of Meinicke’s Division. At the end of the battle, the timely intervention of the regiment saved Frederick II from being captured. On September 1, the regiment fought in a skirmish near Lübben. On October 29, it was at the skirmish of Sadowitz. On December 3 and 4, 150 men of the regiment were attached to a small isolated Prussian force under Major-General Dierecke who had taken post at Meissen. This small corps was attacked by a much stronger Austrian force and, during the Combat of Meissen, forced to retire.

In 1762, the regiment served in Silesia. On July 21, it took part in the Battle of Burkersdorf where it cleared the enemy from the heights of Burkersdorf and Leutmannsdorf. At Spechtshausen in the Taranter forest, they attacked the Austrian advanced guard, taking several hundred prisoners and 6 cannon. In July and August, the regiment covered the siege of Schweidnitz. On November 7, it was at the siege of Landsberg. 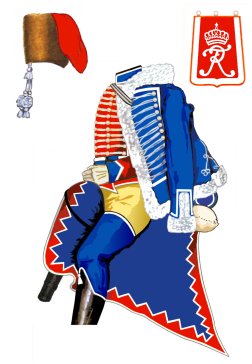 Troopers were armed with a short, curved sabre, two pistols and a carbine. They rode white-grey horses.

The Uniformes Prussien et Saxonne, illustrating the uniform in 1756-57, shows scarlet cords, knots and tassels at the kolback, scarlet trousers with white decorations on the thighs.

Schmalen in 1759 illustrated brown fur trim on the pelisse and white trousers.

From 1743, the kolback of the officers of the regiment was decorated with a golden sceptre to which was fastened a small black wing.

The officers of the regiment wore uniforms similar to those of the troopers with the following differences:

The shabraques of the officers were identical to those of the troopers but their rear corners were decorated with the king's cipher on a white filed framed and crowned in gold.

In 1757, after the victory of Leuthen, Queen Sophia Dorothea gave 32 leopard skins to the officers of this regiment. From then on, the first 3 officers of each squadron wore this leopard skin over the left shoulder instead of the pelisse for reviews and galas.

Digby Smith for the initial version of this article and Michael Zahn for contemporary pictorial sources.