From Project Athinai
Jump to navigationJump to search

You are here: Main Page >> Akropolis 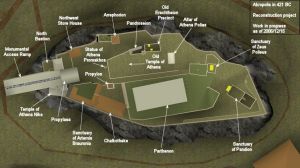 When the Persians sacked Athens in 480 BC, they demolished almost everything on the Akropolis, including fortification walls, buildings and statues. For 30 years, the Athenians did not endeavour to conduct any major rebuilding. However, fortifications were restored and the natural area of the Akropolis was enlarged with one or more terraces on the south of the Parthenon.

The Periclean Building Program was authorised in 449 BC and begun in 447 BC. Pheidias probably supervised the entire program. During these huge works, the Parthenon, Propylaea, Athena Nike, Brauronion were built transforming the Akropolis forever and immortalising the Classical City of Athens. 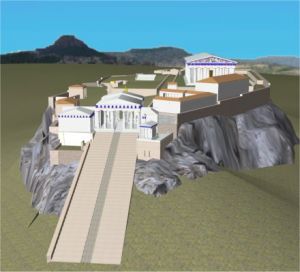 The Akropolis sits on an irregularly shaped oval rock some 300 m wide by 85 m deep. This rock culminates at 156 m above the sea. It rises suddenly from the surrounding plain thus creating a cliff approximately 30 m. high. The only easy approach is from the west. The rock is topped by a layer of limestone.

A Processional Way, some 8 m wide, led all the way from the Propylaea to a point some 35 m northwest of the northeast corner of the Parthenon. The Way then turned southward and ended at the propylon of the Sanctuary of Pandion.

Caves dedicated to Zeus Olympios, Apollo Pythios Hypoakraios and Pan are located on the northwest face of the rock. Another large cave, the Cave of Aglauros, occupies the middle of the north face. An inner stairway led from the top of the Akropolis, near the House of the Arrephoroi, to a spring located within the cave of Aglauros.

Several prize amphorae were dedicated to the gods by several victorious athletes. They could be found in several places all over the Akropolis. For example, the Panathenaic amphorae were filled with olive oil produced by Athena's olive trees and decorated with black figures, Athena on one side and a sport scene on the other. 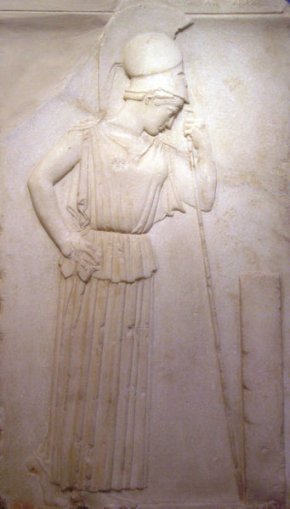 The Akropolis was literally covered with a forest of dedications: steles, statues and perirrhanteria (a small marble water basin supported by a columnar base). The relief illustrated here, known as the "Mourning Athena", has been sculptured around 455 BC and is just an example among many others.

The statue of General Olympiodoros, erected near the southern walls of the citadel dates from around 280 BC.

The large group of defeated Giants, Amazons, Persians and Gauls was dedicated by Attalos I, king of Pergamon, around 200 BC to commemorate his victory over the Galateans.

In 178 BC, Attalos II, prince of Pergamon, after his victory at the Panathenaic Games, dedicated the so called monument of Agrippa, in front of the Propylaea. It consisted of a large pillar supporting a bronze four-horse chariot driven by the king. Towards the end of the 1st century BC, a chariot driven by Agrippa took the place of Eumenes's chariot.

The temple of Roma and Augustus was dedicated in 19 BC to commemorate the victory of Augustus over Parthia. It was located some 23 m east of the Parthenon.

The statue of Gaia imploring Zeus for rain dates from the 2nd century AD.

Neils, Jenifer, The Parthenon: From Antiquity to the Present, Cambridge University Press, 2005, pp. 16-18