1755 - British operation on the Malabar Coast

The main campaign took place from March to April 1755

The pirate Tulaji Angre (also known as Tollagee Angria), a former Maratha admiral who had thrown off his allegiance, had gradually extended his authority from the small island stronghold of Severndroog (present-day Suvarnadurg) over a large stretch of the Maratha Coast, which included the town and port of Gheriah (present-day Vijaydurg). The natives of India, European traders and the East India Company feared his ships. The Marathas had long urged the East India Company to assist them to overthrow Angre's power.

Around 1735, the Dutch had vainly tried to capture Gheriah with 7 ships and 2 bomb-vessels.

Later in 1754, Angre had taken the East Indiaman Derby, richly laden with 150 men on board, and later the Restoration (20) an armed ship with 200 men on board and the French Jupiter (40) transporting 400 slaves. He had also ventured to attack Commodore William Lisle, who commanded the Vigilant (64), the Ruby (50) and several other vessels of the company. The pirates made their attempt against his flotilla as it was leaving the Malabar Coast (south-western coast of the Indian sub-continent).

In 1755, due to the suspension of hostilities, British warships stationed in India lay idle. An agreement among the East India Company, the British Government and the Marathas led to the fitting out against Tulaji Angre of a force for the reduction of piracy on the Malabar Coast, because pirates had been impairing the trade of Bombay (present-day Mumbai) for too long.

On March 22 1755, Commodore James, who was commander-in-chief of the navy of the East India Company, sailed from Bombay in the Protector (44) with the Swallow (16) and the Viper and Triumph bomb-vessels. 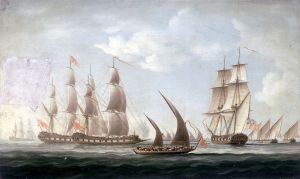 On March 23, James sighted 7 grabs (a type of ship common on the Malabar Coast, combining an indigenous hull form with a pointed prow, with or without a bowsprit, and European rigging on two to three masts) and 11 gallivats (a type of small armed boat with sails and oars common on the Malabar Coast) belonging to Angre's Fleet off Rajapore (present-day Rajapur). He chased them southwards.

On March 24, the Maratha's Fleet (7 grabs and 60 gallivats) effected a junction with James' squadron. The Maratha's men then proceeded to Commoro Bay (unidentified location) where they landed (according to Cambridge, their religion prohibited them to eat on board).

On March 25, the Marathas landed once more. Commodore James was informed that Angre's Fleet was in the harbour of Severndroog.

On March 29, James and his Maratha allies approached Severndroog. Angre's Fleet immediately slipped their cables and ran out to sea, the gallivats towing the larger vessels. This gave them a great advantage over the British ships, as there was little wind. The chase continued from daybreak to the afternoon, but Angre's Fleet managed to escape. James' squadron then returned to Severndroog.

Capture of the Fortress of Severndroog

The Fortress of Severndroog was located on an island within musket-shot of the main land. It was strongly fortified, the greatest part of the works being cut out of the solid rock and the rest built with large stones (approx. 11 square feet). On the bastions, there were 54 guns. The fortress was also covered by three forts on the main land. The largest fort, called Goa, was built with large stones and mounted 40 guns. The two other forts, built with smaller stones of irregular shape, each mounted 20 guns.

On April 2, Commodore James began to cannonade and bombard the Fortress of Severndroog, but he soon realised that the walls in these quarters were too strong and took a new position allowing him to fire on Fort Goa with his lower deck guns while still cannonading Severndroog with his upper tier. About noon, the north-east bastion of Severndroog and part of the parapet were laid in ruins. A shell set fire to the houses and the ceaseless bombardment prevented the garrison from extinguishing these fires. The northerly wind spread the fire all over the fort and a powder magazine blew up. A multitude of men, women and children fled to the farther side of the island and embarked in boats. Most of them were captured by the Swallow (16) which was stationed to the south to prevent any assistance from the mainland on that side. Commodore James then turned all his fire on Fort Goa and, after a severe cannonade, the enemy hung out a flag of truce. However, the governor of the fort had managed to cross over to Severndroog with a picked force of sepoys. The governor was now in possession of the Island of Severndroog while Commodore James had made himself master of the three coastal forts. The governor was resolved to hold his position until the arrival of reinforcements from Dabul. The British landed a number of seamen under the cover of the fire from the ships. These seamen ran up to the gates and with their axes cut open the gate of the sally port and entered into the fortress, which soon surrendered.

Meanwhile, on April 6, Rear-Admiral Watson, who was still stationed near Madras (present-day Chennai), sailed to Trincomalee on the coast of Ceylon to avoid the risk of bad weather on the Coast of Coromandel (south-eastern coast of the Indian sub-continent).

On April 8, Commodore James anchored off Bankot (Fort Victoria), the most northern port of any consequence of all Angre's dominion.

On April 11, Commodore James delivered all the forts recently captured, with the exception of Bankot, to his Marathas allies.

On April 15, Commodore James was recalled to Bombay and had to abandon his design against Dabul.

On May 13, Watson's Fleet returned to Fort St. David (near Cuddalore) where it remained for three months.

On October 10, Watson's entire squadron sailed for Bombay. This squadron consisted of:

In October, Robert Clive arrived at Bombay from Great Britain, on his way to Fort St. David where he had been appointed governor. He had with him 300 European recruits for the East India Company.

On November 10, Watson's squadron arrived at Bombay and it was decided to attack Angre's forts on the western coast of India.

While Watson's ships were cleaning and repairing, Commodore James of the East India Company in the Protector (44) and the Revenge and Bombay frigates under his command were sent to reconnoitre Gheriah (present-day Vijaydurg), the capital of Angre's dominion and his chief stronghold, and to sound the depths at the entrance of the harbour.

On December 31, James returned to Bombay and Rear-Admiral Watson sent the Bridgewater (24) and Kingfisher (14), with some of the company's armed vessels, to cruise off the port of Gheriah.