The siege lasted from April to June 1756

In April 1756, when a large French amphibious expedition proceeded to the invasion of the Island of Minorca, General Blakeney, the governor of the island, retired to Fort St. Philip with his four infantry regiments (4th, 23rd, 24th and 34th). Fort St. Philip, which commanded the town and harbour of Mahon, was probably the most elaborate fortress possessed by the British, and was inferior in strength to few strongholds in Europe. In addition to the ordinary elaborations of the school of Vauban, it was strengthened by numerous mines and galleries hewn out of the solid rock, affording unusual protection to the defenders.

On April 18, the French landed unopposed at Ciutadella, at the northwestern end of Minorca. By April 20, the entire French army had disembarked.

On April 23, the Duc de Richelieu arrived at Mahon at 5:00 p.m. with the main force and encamped on a nearby height. His force now consisted of 22 battalions, since one battalion had been left at Ciutadella and another at Fornells while I./Cambis Infanterie and three companies of Vermandois Infanterie, previously delayed at Toulon, had not yet rejoined the army. Richelieu was still awaiting his siege guns. He sent orders to M. de Mirepoix to assemble five more battalions at Marseille, including the II./Cambis Infanterie which was still in Provence, to reinforce his army. Fearing for the coasts of Provence which were only guarded by II./Cambis Infanterie and 5 poor quality militia battalions, he also ordered the regiments of Saint-Chamond (2 bns) and Royal Corse to reinforce this area. The same day, Commodore Edgcumbe's squadron, consisting of two British ships of the line (Portland (50) and Princess Louisa (60)), two frigates (Chesterfield (44), Dolphin (24)) and a sloop of war (Porcupine (16)); left the harbour of Mahon after bringing in about ten captured French merchant vessels. However, before leaving for Gibraltar, Edgcumbe sent Blakeney 140 marines and 40 soldiers belonging to the garrison of Gibraltar that he could spare under Captain Carr Scrope of the Dolphin who left his ship under the command of his first lieutenant.

While Richelieu was advancing on Mahon, Admiral de la Galissonière disembarked the siege guns at Ciutadella and had the convoy take shelter in the harbour of Fornells where he also placed the supplies. He took dispositions to regularly send ammunition and war supplies by boat to the beach of Mesquida near Mahon. However, he could not find appropriate carriages on the island to transport the siege guns from Ciutadella to Mahon. M. de Maillebois was sent to Ciutadella to supervise the construction of the needed carriages. These transportation problems caused significant delays in the siege operations.

On April 24, Admiral de la Galissonière left Ciutadella with his squadron and lay at anchor in front of Mahon harbour. However, he arrived too late to intercept Edgcumbe's squadron.

On April 28, the artillery finally left Ciutadella on carriages drawn by oxen, escorted by a detachment of I./Briqueville Infanterie. The convoy reached Mercadal the same day. 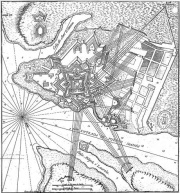 The very rocky terrain surrounding Fort St. Philip made the construction of siege works and batteries very difficult. Finally, a mortar battery, under M. Leblanc, was established near the Signal Tower at Cape Mola on the other side of the harbour in front of Fort St. Philip.

On May 2 and 3, some 800 workers under the supervision of the engineers laboriously brought the guns to Leblanc's battery. M. de Beaumanoir, captain of Royal Infanterie, was charged to protect this battery with 200 men. Another battery, established to the right of Leblanc's battery, could fire on the fort at the entrance of the harbour.

On May 4, Leblanc's battery now consisting of 5 24-pdrs and 5 mortars opened fire on the Queen Bastion. The same day, Beaumanoir reconnoitred the small fort of Philipette, between the Signal Tower and Fort St. Philip, and found it deserted with its guns spiked. As it was within range of the fire of St. Philip, the French did not occupy this small fort.

On May 6, Richelieu sent 100 men to reconnoitre the Ravalle suburb and to clear it of British troops.

On May 7, Richelieu established his front of attack in the Ravalle suburb. The British soldiers and their family previously used these houses, located near Fort St. Philip. Blakeney had neglected to destroy them before the arrival of the French army. Since it was impossible to dig trenches in this area, the streets of this suburb were used as parallels. M. de Briqueville occupied Ravalle with 500 men and batteries were installed behind the houses, less than 300 m from the fort.

On May 9, the French battery at the Signal Tower opened fire. The same day, Richelieu ordered M. de Roquepine to launch a diversionary attack on Fort Marlborough. This attack allowed M. de Maillebois to establish two batteries, one on each side of Ravalle, and a mortar battery nearby.

On May 10, II./Cambis Infanterie finally arrived at Minorca. The other battalion of this regiment as well as the three companies of Vermandois Infanterie, which had been delayed at Toulon, had already joined Richelieu at a previous date.

On May 11, the new French batteries of Ravalle were ready to open fire. Richelieu ordered M. de Roquepine to build an additional battery in front of Fort Marlborough.

In the evening of May 12, the new French batteries opened fire. From then on, Fort St. Philip was subjected night and day to a continuous bombardment.

On May 15, Traisnel Infanterie (2 bns) arrived at Minorca to reinforce the army of the Duc de Richelieu.

On May 18, Admiral de la Galissonière reported to Richelieu that a British relief fleet was in sight at Palma. He asked him for infantrymen to reinforce his ships. Richelieu sent him 13 companies of infantry. However, only three companies managed to join the fleet before its departure.

On May 19, Byng's fleet came in sight of Fort St. Philip. Immediately, de la Galissonière took the sea and advanced to meet Byng. Both fleets tried to take the advantage of the wind.

On May 20, the French won the naval battle of Minorca. Byng, abandoning all hope of relieving Fort St. Philip, retired to Gibraltar. The besieged, though greatly disappointed by this withdrawal, still held out. The fortress was well stored and the batteries were well and effectively served. Richelieu ordered new batteries to be built.

On May 21, Nice Infanterie (2 bns) arrived at Minorca as reinforcement.

On June 7, the new French batteries opened fire with over 100 guns and mortars, inflicting much damage and making a considerable breach. The British repaired the injured works and stood to their guns as steadily as ever.

On June 9, the French fire reopened more hotly than before and battered two new breaches. Matters were now growing serious.

On June 14, a party of the British garrison made a sally, driving the French from several of their batteries and spiking the guns, but pursuing their success too far were surrounded and captured almost to a man. Still Richelieu hesitated to storm the fortress.

On June 25 and 26, Richelieu tested the defense of the besieged with some parties of grenadiers.

On June 27, at 10:00 p.m., Richelieu launched a general assault upon several quarters of the fortress simultaneously. M. de Monty marched against Strugen and Argyle forts while MM. de Briqueville and de Sades respectively advanced to the attack of Kane and the Queen's redoubt. The defense was stubborn and the successful explosion of a mine destroyed three companies of French grenadiers. At length Fort Strugen was taken by assault and Argyle and the Queen's redoubt by escalade. The ablest officer of the garrison, Lieutenant-Colonel Jefferies was cut off and made prisoner with about 100 men while defending one of these outworks. Meanwhile, the Prince de Beauveau had marched his brigades against the Western and Caroline lunettes, taken possession of the covert way and nailed up 12 guns. He was unable to take Kane's lunette but managed to cut down the palisade and to destroy the gun carriages. During these attacks, Cunningham, the engineer of the fortress, was severely wounded and rendered unfit for duty.

On June 28 at daybreak, the French controlled the Queen's redoubt and the forts of Strugen and Argyle. They posted 400 men in Strugen and 200 men in Argyle. The French beat a parley. A cessation of arms immediately ensued. Blakeney finally surrendered on honourable terms. The same day, Richelieu received six additional battalions from France along with 300 gunners under M. de Bourquet.

On July 7, the British garrison was embarked for Gibraltar.

The siege had lasted for 70 days and had cost the French at the least 800 killed and 2 to 3,000 wounded. The losses of the British garrison amounted to less than 400 killed and wounded. However, Great Britain had lost one of its most important fortresses in the Mediterranean. The island would remain under French control until the end of the war.