Prelude to the Engagement

On February 17 1758, Ferdinand of Brunswick left Lüneburg with the entire Allied entire army and established his headquarters at Amelinghausen. He then launched a winter offensive in West Germany, seeking to capture Bremen and to cut the communications between the French units cantoned in Westphalia and the French Main Army. Indeed, to the exception of Bremen, the left bank of the Weser and Aller rivers were guarded only by weak French detachments with advanced posts at Rotenburg and Ottersberg.

On February 21, when the Comte de Chabo took command of the French post at Hoya, he immediately evacuated the hospital and magazines who were all located on the right bank of the Weser. He also sent couriers to Bremen to bring back combustible to set the bridge afire if needs be; and sent a detachment up to Verden to destroy all boats and sent detachments of Mestre de Camp Général Dragons and Harcourt Dragons to patrol the banks of the Weser. Finally, he erected entrenchments to defend the bridgehead. 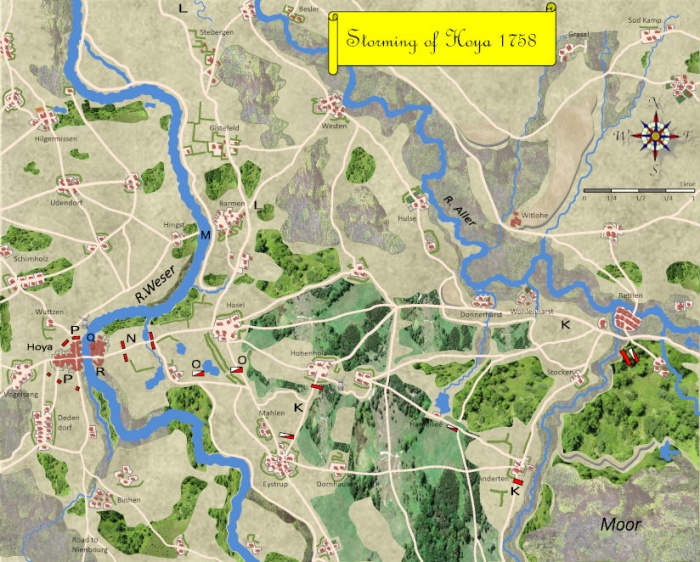 Map of the combats in around Hoya on February 23, 1758 - Copyright Dinos Antoniadis

K March of the Allied avantgarde to Rethum, Eystrup and Hohenholz to support the detachment of the Hereditary Prince of Brunswick.
L The detachment, having passed the Aller at Verden went to the dike L at Barmen, where it separated.
M A party passed the Weser at Barmen by boat and formed the attack against Hoya at P; the other passed by Hasel to envelop Hoya from the right bank of Weser, and undertook a diversionary attack at N.
O..O Small Allied detachments posted to observe the road to Nienburg.
Q The road where the French put fire to cover themselves against the attackers.
R The Chateau where the French capitulated.

On February 23, at 7:00 AM, the Hereditary Prince of Brunswick was detached to Hoya at the head of 2 Hanoverian bns (Hauß Infantry and Oberg Infantry), the 2 bns of Brunswick Guards, 1 dragoon sqn and a body of light horse.

Hoya was defended by the Comte de Chabo with the Gardes Lorraines (2 bns), 2 grenadier coys and 100 fusiliers of Bretagne Infanterie and and 100 men of Mestre de Camp Général Dragons.

The Hereditary Prince crossed the Aller aboard small craft at Verden. To support this enterprise, part of his vanguard advanced on Eystrup by Rethem while his detachment proceeded to Dörverden and Barme, near which place he expected to cross the Weser aboard some floats of timber with part of his troops.

At noon, the Allies advanced by the road from Verden and captured a French patrol. Chabo advanced with part of his troops and a skirmish took place. When he saw that the Allied force was more important than his detachment, he retired to an prepared entrenchment at the head of the bridge of Hoya and tried to delay the Allies while he was completing the evacuation of the hospital.

At this point, the Prince divided his corps. He planned to cross the Weser with Hauß Infantry and the Brunswick Guards and to attack Hoya from the left bank of the river while Oberg Infantry along with the dragoon squadron were to follow his movement on the right bank and to make a diversionary demonstration against Hoya.

The Prince managed to use floats of timber to gradually transport the 3 battalions assigned to this turning movement. This operations went totally unnoticed by the detachments of French dragoons who were supposed to patrol the banks of the Weser. However, only half the intended detachment managed to cross the river before a storm put a stop to the operation. Only Hauß Infantry and one half of II./Brunswick Guards were across at this moment. Nevertheless, the Prince advanced on Hoya with this reduced detachment.

Another patrol of 40 men of the Mestre de Camp Général Dragons, led by an aide-major, finally clashed with Allied forces. The aide-major was taken prisoners and the patrol fled without giving the alarm in Hoya.

The Prince arrived at destination at 6:00 p.m. while his other troops attacked Hoya from the opposite bank driving back French outposts before them. By then, the bridge of Hoya had been almost completely cut by the French who were preparing to set it afire.

Chabo sent his 4 grenadier coys to contain the Allies on the left bank, leaving his piquets and the Gardes Lorraines to defend the entrenchments on the right bank. The unexpected attack from the left bank disorganised Chabo's plans and he did not have enough time to burn the bridge.

The Allies then stormed the town. After a stubborn resistance of two hours, the French retired into the castle where they resisted for an additional hour.

During this action, the Allied detachment inflicted 300 casualties and took 200 prisoners while losing itself 13 killed and 73 wounded.

The Comte de Saint-Germain, fearing to be cut off from the main army, evacuated Bremen and retired on Osnabrück. Diepenbroick immediately occupied Bremen.

The remnants of the Gardes Lorraines (98 men) retired southwards to Nienburg where they were soon joined by 40 stragglers.

After this successful raid by the Allies, the Comte de Saint-Germain, fearing to be cut off from the main army, evacuated Bremen and retired on Osnabrück. Diepenbroick immediately occupied Bremen.