Since the beginning of August 1758, a strong British amphibious force (12 bns, 9 light dragoons troops and 109 sails) under Lieutenant-general Bligh was conducting raids on the French coasts of Normandy and Bretagne. After capturing Cherbourg (August 7), destroying its docks and burning its shipping; the British force sailed for Saint-Malo at the beginning of September. Troops were landed on September 4 and 5. The attack on Saint-Malo soon proved to be impracticable but in the meantime, weather had seriously worsened and Admiral Howe had to abandon his anchorage at Saint-Lunaire. He instructed Bligh to rendezvous with the fleet at Saint-Cast, a few km west of Saint-Malo.

Bligh set out towards Saint-Cast on September 7 and encamped near the Arguenon river. His army forded the Arguenon on September 9 at 3:00 pm. On September 10, resuming his march towards Saint-Cast, Bligh met a first force of 500 French troops who were easily repulsed. He then encamped at Matignon, sent his engineers to reconnoitre the beach at Saint-Cast and informed Howe that he intended to re-embark on September 11. Then, a battalion of the I./Coldstream Regiment of Guards took possession of the ground to the right of the village of Saint-Cast, near the windmill. The bay was covered by an entrenchment made by the French to prevent a landing. The British began to modify these entrenchments to turn them against the French but work could not be completed for want of tools. It was proposed to choose another beach, located between Saint-Cast and Saint-Guildo, but the proposal was rejected. However, in the meantime, the French had gathered troops near Saint-Cast. During the night, a battalion of the I./Coldstream Regiment of Guards captured two small French batteries and destroyed them. 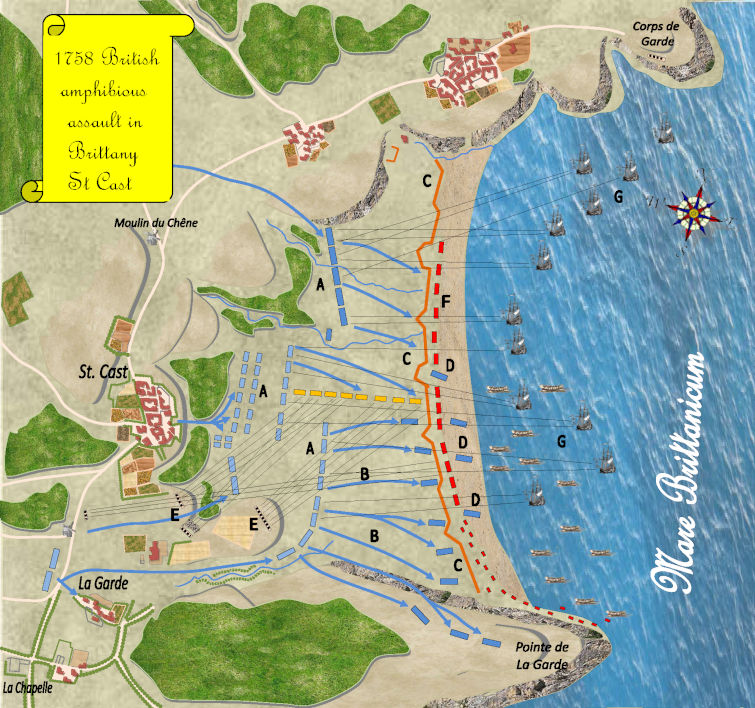 Map of the Combat of Saint-Cast, fought on September 11, 1758 - Copyright Dinos Antoniadis

Early in the morning of Monday September 11 (around 2:00 am), the British drums beat the Générale as usual, soon followed by the "Assembly". This immediately informed the French of the departure of the British army. The British troops then moved off in a single column, consuming a long time in the march of 5 km to Saint-Cast (they would arrive only at 9:00 am).

At 4:00 am, the French were assembled on the heights of Saint-Cast. The Duc d'Aiguillon arranged his small army into four corps. He then ordered three of these corps to advance upon Saint-Cast.

By 6:00 am, the French had reached the coast. The British had deployed their rearguard in entrenchments built by the French Garde-Côtes militia several years earlier.

Around 9:00 am, when the British troops finally reached the beach of Saint-Cast, embarkation immediately began under the cover of 5 frigates and 3 bomb-ketches. The first troops embarked on board the boats were mistakenly rowed too far in quest of their respective ships, loosing precious time. On their return, the flat bottomed boats were employed in carrying away horses and cows instead of men. Meanwhile, the French had appeared by a windmill to the left and played on the troops embarking from a battery of 10 guns and 8 mortars. They soon after marched down a hollow way to attack the British. As soon as the French troops appeared on the beach, the British ships severely played on them, putting them into great confusion. Nevertheless, the French formed in a long line under cover of small hills on the British right.

At 11:00 am, when two-thirds of the British force had already been shipped, the left wing of the French army under d'Aubigny formed into columns and marched forward despite the fire from the frigates. The 300 grenadiers under the Marquis de Cussi and the Comte de Montaigu attacked first, soon followed by M. Latour d'Auvergne at the head of Boulonnais Infanterie. The Brie and Fontenay-le-Comte regiments did the same. There were still some 3,000 British troops on the beach.

General Drury, who commanded the British rearguard, consisting of 1,400 men of the Guards and all the grenadiers, was obliged to form his men behind protective sand banks across the beach to cover the embarkation. Twice he drove back the French but; when the French brought up their artillery and opened a furious fire; the British units panicked, broke and fled in the utmost confusion. Sir John Armitage was shot through the head at the beginning of the action, many of the officers fell and a great number of men were slain. It soon became a dreadful carnage: some ran into the sea and endeavoured to save their lives by swimming towards the boats which were ordered to give them all possible assistance. Drury perished in the sea. The men were butchered both on the shore and in the water. So many of the British boats were destroyed that the sailors shrank from approaching the shore and were only kept to their work by the personal example of Howe who ordered himself to be rowed in his own boat through the thickest of the fire and brought off as many men as he could.

During this time, several of the frigates continued to fire on the French army. However, the commodore ordered them to cease fire. Seeing this, the French officers and soldiers behaved instantly with the greatest generosity and moderation, giving immediate quarter and protection to the vanquished. This was quite surprising given the marauding, pillaging, burning and other excesses committed by the British during this expedition.

In all 1,160 British officers and men were killed and wounded. General Drury was among the slain. The rest of the rearguard were taken prisoners (702 men and 30 officers). Of the British naval officers who were superintending the embarkation, Captains Joshua Kowley, Jervis Maplesden and William Paston, and Commander John Elphinstone, were taken. The further naval loss, however, was but 8 killed and 17 wounded.

The French forces were organised in 4 corps:

The artillery, planted on the heights overlooking the beach, was under the command of Ville-Patour and consisted of

Furthermore, several units of Garde-Côtes Militia were also present at the combat but are not listed in any specific column:

N.B.: the above order of battle is derived from the following maps