1758 - Russian invasion of Brandenburg – Frederick comes to the rescue

The advance of the Russian army from Poland into Brandenburg, the counter-manoeuvre of Dohna’s Army and the siege of Cüstrin are described in our article 1758 - Russian invasion of Brandenburg – Arrival of the Russians.

Frederick comes to the rescue 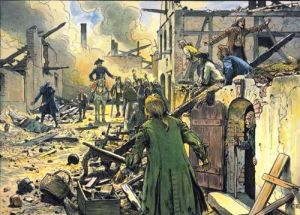 During the night, Fermor reorganised his positions once more, moving his best regiments from his first line to his second, since it was this line which was now facing the Prussians. He disposed his army in a large square on the Heights of Quartschen. The cavalry and the baggage were placed inside this hollow square. Only Cossacks were left outside the square.

The Russians now had a free line of communication with their “Wagenburg”. Furthermore, as the Prussians received new ammunition, the situation of Fermor’s Army became more serious. Fermor had not other choice than to march to Klein-Cammin.

During the very dark night of August 26 to 27, under heavy rain

The same day, the Prussians and the Russians both celebrated victory…

In the night of August 31 to September 1, Rumyantsev’s Division reached Marwitz (present-day Marwice).

At the end of August, Frederick still had no clear view of the movements of the Austrian armies. Nevertheless, he realised that the situation of Prince Heinrich in Saxony would soon become untenable with his small army (less than 20,000 men) to face some 80,000 Austrians. Prince Heinrich not only had to oppose the Reichsarmee but also Daun, who was advancing from Görlitz in the direction of the Elbe. Frederick wanted to come to the assistance of his brother but with the Russian army still at Klein-Cammin, he did not dare to leave Dohna to face Fermor alone. He intended to leave for Saxony as soon as Fermor would retire towards Landsberg. He hoped that supply problems would prevent the Russians from undertaking any new offensive.