In 1758, a large Russian army had proceeded to the invasion of East Prussia and then to the invasion of Brandenburg. After the indecisive Battle of Zorndorf at the end of August, the Russian army remained idle in Brandenburg during the whole month of September. Due to lack of supplies, it then slowly retired towards East Pomerania. However, at the beginning of October, General Fermor detached Palmenbach with a corps to lay siege to Colberg. Indeed, the capture of this fortress and of its harbour would give the Russians an easily supplied place to sustain an army wintering in Eastern Pomerania. Furthermore, this would open a much shorter line of communication to supply an army campaigning in Brandenburg or Silesia the following year.

Since the beginning of 1758, the commandant of Colberg was Major von der Heyde. He was assisted by three other veterans: Artillery-Lieutenant Ebel, Lieutenant von Koschitzki as engineer, and Lieutenant Scheel. Upon arrival, he had immediately begun to improve the existing defensive works. From March to August, the Prussians had already reinforced the defences of the fortress by building a wooden palisade in front the covert way surrounding the fortress. Furthermore, they prepared all batteries, made sally ports and threw temporary bridges over the ditches.

By the end of September, thanks to Heyde’s ceaseless activity, the improvements undertaken had been completed. With only 8 artillerymen to man his numerous artillery, Heyde had to assign soldiers of his 2 bns to serve the pieces. Some inhabitants also volunteered for this task. Other inhabitants formed a battalion which was charged to man the walls while the 2 land battalions occupied the outer works.

When a Russian corps appeared in front of Colberg at the beginning of October, work was still under way to properly defend the “New Town” whose curtain walls and ravelins were not quite completed 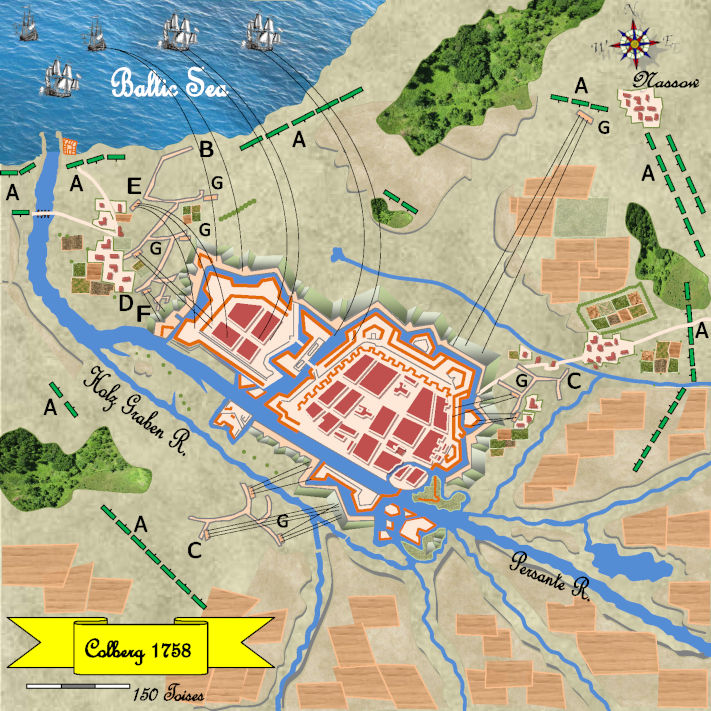 The Fortress of Colberg (present-day Kołobrzeg) is located on the coast of Eastern Pomerania, at the mouth of the Persante River (present-day Parsęta). At its mouth, the Persante formed a small seaport well sheltered from storms and waves, the only major one of Eastern Pomerania. A thick earthwork with 12 iron pieces, erected at the mouth of the river, defended the entrance of the harbour, which was protected against the swell of the sea by two short jetties jutting into the sea. Another earthwork along the south-western edge of the Maikuhle Woods protected the place against a landing. The fortress had Vauban-style defensive works (3 m. thick earth curtain walls and 4 m. thick earth bastions), but there were major defects in their design. The high and very steep earth walls were strong, but had almost no masonry, being merely covered with brick. Furthermore, there were not enough casemates.

The whole work was surrounded by large ditches. The strength of the fortress was based on these wide ditches, and even more on its swampy surroundings intersected by many streams. The damp ground made siege work extremely difficult, especially since, in spring and autumn, the trenches were soon filled with water. Furthermore, the foreground on the south side of the fortress, between the Lauenburg and the Geld gates, could be flooded by secured locks. Even though there were no protecting dams on the northeastern, eastern and western sides of the fortress, it was also possible to flood the plain there, leaving only narrow accesses to the fortress. The weakest part of the natural defences of the fortress was its eastern side where a flat and broad plateau-like elevation, starting very close to the defensive works, extended to the east for a distance of 1½ km, thus allowing an attacker enough room to deploy his artillery. However, if the forces available to defend the fortress were significant, their line of defense could be extended to this plateau in the most advantageous manner, since it was isolated from the undulating ground to its south and east by wide swamps. Furthermore, a semicircular chain of knolls located to the south of the fortress and extending from the old town to the "Hohen Berg" provided suitable outposts for the defenders. Therefore, with a proper garrison, Colberg could oppose a strong resistance.

The terrain made the approach to the defensive works very difficult and the artillery of the attackers could only take a position at a distance. For these reasons, the artillery could not initially inflict serious damages to the earthworks. In such circumstances, one had to expect a long siege. Therefore, the main concern of the defenders was to provide adequate provisions to the fortress, since famine appeared as the worst of all enemies. But if the fortress was provided with enough food, ammunition and troops, it might well be able to resist far superior forces.

However, these favourable conditions were not met in 1758. The garrison consisted only of 2 bns (Land Militia Battalion Nr. 9 Schmeling and Land Militia Battalion Nr. 10 Kleist) which had already given up their best men to Dohna’s field regiments to compensate for the losses suffered at Zorndorf, and replaced them with recruits. Furthermore, these two units still counted 120 Saxons impressed in their ranks after the capitulation of Pirna. Together, these 2 bns counted some 700 men. In addition, the garrison included a few invalids who had come from the Castle of Draheim (present-day Drahim), but there was no cavalry. To man the defensive works of Colberg properly, a garrison of some 3,500 men would have been required. The fortress was well provided with artillery (130 cannon from 3-pdr to 24-pdr, and 14 mortars) and ammunition but only 8 artillerymen were available.

On September 28, a Russian corps under the command of Major-General Palmenbach marched towards Colberg from Fermor’s camp at Alt-Prilipp (present-day Stary Przylep) near Stargard. It consisted of 4 infantry rgts (about 3,000 men), 2 sqns of horse grenadiers, 2 sqns of hussars and some Cossacks with 8 regimental pieces and 12 heavy pieces. Palmenbach marched by Stargard, Labes (present-day Lobez), Schivelbein (present-day Świdwin), Sellnow (present-day Zieleniewo) to Colberg to undertake the siege of the fortress. Now that Russian troops were operating in Eastern Pomerania, this little fortress had suddenly acquired a great importance.

Informed of the Russian advance on Colberg, the Duke of Bevern at Stettin (present-day Szczecin) immediately detached Lieutenant-Colonel von Schaffstedt with the 2 bns of the Garrison Regiment I von Puttkamer and 30 artillerymen by Gross-Stepenitz (present-day Stepnica) and Cammin (present-day Kamień Pomorski) along the coast in the direction of Colberg. Schaffstedt had been instructed to use boats to reach Colberg if ever the land route was blocked.

On the night of October 2, Schaffstedt’s detachment cantoned in and around Greifenberg (present-day Gryfice).

In the night of October 4 to 5, Palmenbach occupied the suburb at the mouth of the Persante. The houses, the tree garden and the building of the suburb of Pfannschmiede offered the Russians good cover for their siege works.

On October 6, a Russian battery of 3 unicorns bombarded the fortress from the Maikuhle Woods while work on the trenches went on.

On the night of October 6 to 7, Russian artillery pieces were moved from the batteries along the Maikuhle Woods to the new battery in the tree garden of Pfannschmiede.

Palmenbach had soon realized that his chosen point of attack against the fortress was inappropriate and that he had insufficient siege equipment and troops to lead a successful siege. The defensive works had remained completely undamaged and the bombardments had not caused the expected panic among the inhabitants. Palmenbach had already informed Fermor of the situation, but the latter would know nothing about raising the siege; he rather sent him a reinforcement under Colonel Yakoblev consisting of Kievskiy Infantry and Troitskiy Infantry with their regimental guns (probably 6 pieces), 2 howitzers and 700 light cavalry, a total of about 2,700 men.

During the night of October 8 to 9, a hail of bombs and red hot balls fell on Colberg till 5:00 a.m.

During the night of October 10 to 11, Yakoblev made an approach trench at the mouth of the Persante towards St. Nicholas Church in Pfannschmiede, this church was located on a small hill.

On the night of October 11 to 12, Yakoblev moved his encampment near Neckniehn behind the “Hohen Berg” and established a battery on its north-western slope near the brickyard.

From then on, siege works progressed faster. Despite the lively fire of the defenders, the Russians managed, under the cover of the houses of the Pfannschmiede, to push their approach trench closer and to start working at a new battery between the St. Nicholas Church and the glacis.

During the night of October 12 to 13, about midnight, there was a false alarm in Colberg.

On the night of October 14 to 15, the Russians cut through the glacis and reached the ditch. They thought that they would have an easy time with the ramparts which appeared to be in poor condition. But Heyde had silently work on the part of the wall facing the Russian approach, cutting it so deeply that it would be easy to break it with a few well adjusted shots. When the Russians started to bring down the palisade of the covert way and the defenders could see the approaching columns of grenadiers under the moonshine, the Prussians suddenly opened against them, spreading panic in their ranks and forcing them to retire to their trenches with heavy losses. Finally, the Russians managed to establish a breastwork on the covert way with gabions. During this attack, the Russians had also launched another assault with 200 grenadiers and 200 dismounted horse grenadiers on the flat on the west bank of the Persante between the Pfannschmiede and the outer works of the Gelder Gate behind which was kept the provision of hay and straw of the town. However, 50 men of the garrison were posted there and drove back the attackers.

In the next few days, the Russians prepared positions from which to storm the place and established a battery on the glacis; works were also erected on the street leading from the Pfannschmiede to Colberg. The Russian battery established on the north-west slope of the “Hohen Berg” was particularly annoying. The artillery of the defenders was constantly active. To have a better field of fire on the Russian positions, Heyde had the ramparts removed at some suitable places.

During the night of October 19 to 20, the Russians started the building of a new battery in the Lauenburg suburb.

On October 23, the Russian artillery fired only sporadically to preserve the remaining ammunition. The battery on the Lauenburg side was completed and 2 howitzers mounted in it.

On October 24, Fermor sent a reinforcement (Narvskiy Infantry, Sibirskiy Infantry with their regimental pieces and 2 unicorns and some ammunition) to Palmenbach’s siege corps.

On October 26, Wobersnow marched from Massow (present-day Maszewo) to Naugard (present-day Nowogard) where he was informed that Greifenberg was occupied by 300 cossacks and horse grenadiers. During the evening Wobersnow detached Colonel Schlaberndorf with a battalion of Kanitz Infantry, 3 sqns of Alt-Platen Dragoons and 300 hussars to Plathe (present-day Płoty) on the river Rega.

On the night of October 31 to November 1, Palmenbach retired and his corps began its march to join the main Russian army.

Summary: 2 militia bns (some 700 men including some invalids sent from Draheim), 1 volunteer bn and 8 artillerymen

Local volunteers (1 bn recruited among the inhabitants of Colberg)

Tomasz Karpiński (student at the Institute of History, University of Adam Mickiewicz in Poznań, Poland) for the detailed Russian order of battle.