In September 1758, the squadron of the French Chef d'escadre Anne Antoine Comte d'Aché had left India and retired to Île de France (present-day Mauritius) where it had been reinforced by 3 ships of the line and several French East India Company's ships.

On April 7, Vice-Admiral George Pocock, who had refitted his squadron at Bombay (present-day Mumbai), sailed for the Coast of Coromandel, endeavouring to get thither in advance of the French fleet, which was expected back from Île de France. He succeeded in this object and then cruised to intercept the enemy.

On June 30, Pocock was joined by the Grafton (70), and Sunderland (60), with 5 East Indiamen full of stores, of which he was greatly in need.

On August 3, Pocock sailed for Pondicherry and, during the rest of the month, cruised off that port to stop the French fleet before it could deliver supplies to the town. However, he could learn nothing of the French squadron and was at length obliged by lack of provisions and water to proceed to Trincomalee on the north-eastern coast of Ceylon.

On September 2, both fleets sighted each other off Point Pedro (aka Point Palmyra) in Ceylon. The British squadron finally lost sight of the French ships and sailed for Pondicherry.

In the early morning of September 8, Pocock arrived off Pondicherry. At 1:00 p.m., he sighted the French fleet to the southeast.

On the morning of September 9, the British and French fleets faced each other but no action resulted. 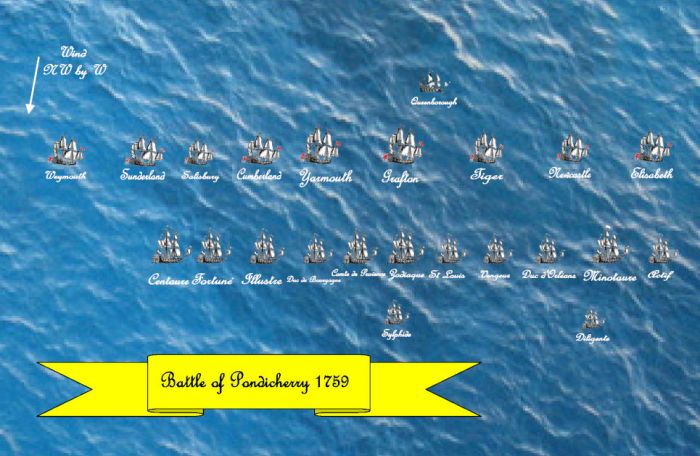 Map of the Battle of Pondicherry - Copyright Dinos Antoniadis

At 10:00 a.m., the French squadron wore and formed the line of battle ahead upon the larboard tack.

At 11:00 a.m., the British squadron wore and formed the line ahead upon the larboard tack and kept edging down upon the French squadron.

At 2:00 p.m., the Yarmouth (64) being nearly abreast of the French admiral’s second in the rear and within musket shot, Admiral d’Aché made the signal for battle. Pocock immediately did the same, on which both squadrons began to cannonade each other. The Elizabeth (64) leading, the action was begun on the British side by Rear-Admiral Charles Stevens, who, in the Grafton (70), attacked the Zodiaque (74). The tactics of the day present no features of special interest and the action is chiefly remarkable for the fury with which it was fought.

About 4:00 p.m., the French rear and soon the French centre began to give way, the Sunderland (60) having got up some time before and engaged their stern-most ship. The French van made sail, stood on and then the entire squadron bore away and steered to the S. S. E. with all sail.

The British were in no condition to pursue, four of their ships had sustained a hot fire from the six largest French ship. The Tiger (60) had had her mizen-mast and maintop-mast shot away and was greatly disabled. The Newcastle (50) was much damaged in her masts, yards and rigging; and the Cumberland (66) and Salisbury (50) in the rear, were not in a condition to make sail. The Yarmouth (64) had her foretop-sail-yard shot away in the slings; and the Grafton (70) and Elizabeth (64) were greatly disabled in their masts, yards and rigging. The Weymouth (60) and Sunderland (60), the only ships that had not suffered, could not get properly into action, as the French began to engage before they could close.

In the evening, the more numerous French squadron continued retreating southwards till dark.

Pocock ordered the Revenge (frigate of the East India Company) to observe the motions of the French and then lay to on the larboard tack to enable his most shattered vessels to repair damages.

The British lost 118 men killed in action, 66 men who died from their wounds, another 122 men severely wounded and 263 lightly wounded. Among the dead were Captain Michie of the Newcastle (50), Captain Gore of the Marines and Lieutenant Redshaw, both of the Newcastle; Lieutenant Elliot and the gunner of the [Tiger (60)]]; the master of the Yarmouth (64); and the boatswain of the Elizabeth (64). Captain Somerset of the Cumberland (66) was wounded in an ankle, and Captain Burton received a contusion on his head.

The French had less damage in their rigging but were very much shattered in their hulls. However, the loss sustained in the engagement was, all things considered, enormous, amounting, as it did, to nearly 1,500 killed and wounded. Among the killed were the captains of the Zodiaque (74) and Centaure (70), and among the wounded was d'Aché himself.

At dawn on September 11, the French were seen in the S.S.E., about 20 km away, lying to on the larboard tack, the wind being about west. On perceiving the British, they at once wore and brought to on the other tack and so continued until evening, when they were so far off that they were almost out of sight. At that time, the wind veering to the east, Pocock signalled his ships to wear, and stood under easy sail to the south-west ; the Sunderland (60) towing the Newcastle (50), the Weymouth (60) the Tiger (60), and the Elizabeth (64) the Cumberland (66). The French finally made for Pondicherry where they disembarked supplies.

Summary: 9 ships of the line, 1 frigate

Summary: 11 ships of the line and 2 frigates

*: vessels of the Compagnie des Indes