The campaign lasted from May to November 1760

Prelude to the Campaign

By the end of May 1760, the Russians crossed the Weichsel (present-day Wisła river) and lay in four camps. Prince Henri was waiting for them. His headquarters were in Sagan (present-day Zagan) Country and his force spread out up to Colberg (present-day Kołobrzeg) in the north and linking with Fouqué in the south.

On June 19, Prince Henri advanced from Sagan, through Frankfurt-an-Oder, and got settled at Landsberg (present-day Gorzów Wielkopolski) on the Warthe (present-day Warta) where he remained for a while. His main army consisted of 30 bns and 46 sqns while another corps (7 bns and 20 sqns) under Forcade de Biaix had been detached to protect Pomerania, taking position at Dramburg (present-day Drawsko Pomorskie) to cut General Tottleben who was laying waste to the regions of Belgard (present-day Białogard) and Köslin (present-day Koszalin).

On July 12, Prince Henri began to pass the Warthe.

On July 14, Prince Henri encamped at Gleißen (present-day Glisno) and extended his lines to protect the country from Russian raids.

On July 17, Count Saltykov had completely concentrated his army at Posen (present-day Poznań). This Russian Army consisted of 60,000 regulars and 7,000 cossacks. Rumours indicated that a separate corps, under Fermor, would join Tottleben's cossacks and besiege Colberg.

On July 20, Saltykov sent Tchernichev with his vanguard to Winkowitz (unidentified location).

By July 26, Prince Henri, still at Gleißen, planned to keep the Russians from Frankfurt-an-Oder and to cover Glogau (present-day Glogow) to prevent a siege of Breslau (present-day Wroclaw). Meanwhile, Saltykov had his depots at Siradin (unidentified location) and Kalisch (present-day Kalisz) and considered how to get it carted out in case of an advance of Prince Henriès forces. Saltykov finally decided to besiege Glogau. But Saint Petersburg rather ordered to besiege Breslau. Therefore, on July 26, Saltykov started from Posen in 3 columns with 45,000 men, faster than usual, and marched southward to Moschin (present-day Moszinna). His vanguard under Tchernichev remained at Winkowitz. The Russian Army then took part in a joint campaign in Silesia with the Austrians.

On August 26, a Russian fleet sailing directly from Saint Petersburg arrived in front of Colberg with an army of 8,000 men to put siege to Colberg by land and see.

On August 27, this fleet was joined by a Swedish squadron.

The Siege of Colberg really lasted from August 26, when bombardment began, to September 8, when a relief force under General Werner stormed the Russian entrenchments.

In September, Saltykov fell sick and Fermor took command of the Russian Army.

On September 11, after endless prevarications about various joint plans of operation, Fermor finally made his mind for the plan proposed by Montalembert, the French ambassador, calling for a concentration at Frankfurt-an-der-Oder and then a rapid advance on Berlin with a strong corps. Accordingly, the Russian Army left Herrnstadt and marched to Guhrau (present-day Góra Śląska). A force of 20,000 Russians under Tchernichev with Tottleben as second in command was assigned to this task. The Russian plan for the attack on Berlin called for Tottleben's cossacks corps, reinforced with 2,000 grenadiers, 2 horse grenadier rgts and all light troops; to march with all speed by Guben (present-day Gubin) and Beeskow. Meanwhile, the Russian vanguard under Tchernichev would take position on the Spree to support Tottleben. A third part of the Russian Army would take post at Guben while Rumyantsev would remain in observation at Crossen (present-day Krosno Odrzańskie) on the right bank of the Oder.

On September 19, Fermor reached Carolath. He was now only 43 km from Frankfurt-an-der-Oder and 130 km from Berlin.

On September 20, Tottleben with a vanguard of 5,000 men crossed the Oder at Beuthen (present-day Bytom Odrzański) in Sagan Country and marched directly upon Berlin. This vanguard consisted of:

N.B.: the German Grossergeneralstab work (vol. 14) also mentions the Gruzinskiy Hussars and Vengerskiy Hussars as being part of Tottleben's vanguard

On September 29 in Silesia, when Field-Marshal Daun was informed of Fermor's final decision, he resolved to send Lacy with 15,000 Austrians to march across Lusatia and to make a junction with the Russian Army. Once out of sight of Frederick, Lacy whirled, at a furious rate of speed, into the opposite direction. Its real destination being Berlin. It took a while before Frederick realized that Berlin was under attack. Meanwhile, the Russian Main Army, now some 20,000 men, move towards Frankfurt-an-Oder to support the expedition. Berlin had only weak palisades and an effective garrison of 1,200 men (3 weak battalions).

When he heard of the raid on Berlin, Hülsen resolved to abandon Saxony and to march to the relief of the city with his 9,000 men. Similarly, Prince Eugen of Württemberg who commanded the small Prussian Army facing the Swedes, left Templin (74 km north of Berlin) to come to the rescue of the capital.

On Friday October 3, Hülsen left Wittenberg and marched to Kosnig (unidentified location, maybe Coswig). The same day, Tottleben arrived near Berlin and took post at the Halle Gate, on the west side of the city. The same day, Tchernichev reached Fürstenwalde, 55 km from Berlin. Tottleben summoned Rochow, requiring instant admittance and a ransom of four million thalers. The queen, royal family, archives, principal ministries and directorium had already left for Magdeburg after the disaster at Kunersdorf in 1759. Besides Rochow, there were, by accident, certain generals in Berlin: Lieutenant-General Seydlitz and two others, recovering from their Kunersdorf hurts. Field-Marshal Lehwald was official governor of Berlin. They all took part in the defence of the city gates. Rochow having rejected the summon, bombardment began sporadically at 3:00 p.m., becoming constant at 5:00 p.m.. It continued the same till 3:00 a.m. on October 4.

In the night of October 3 to 4, Prince Eugen of Württemberg arrived with the vanguard of his corps to reinforce the town. The whole corps, counting 5,000 men, was still 64 km from Berlin and was expected the next day.

In the morning of October 4, informed of the arrival of Prince Eugen, Tottleben retired eastward at Köpenick towards Tchernichev, leaving only a corps of cossacks in front of Berlin. In the evening, Lacy, after marching from Silesia at a furious rate, arrived in the environs with an Austrian corps of 15,000 men. The same day, Hülsen marched to Belzig in Brandenburg.

On October 5, Hülsen marched to Beelitz and Prince Eugen encamped in front of the Halle Gate. The same day, the cossacks left in front of Berlin retired, Tchernichev arrived at Köpenick with about 12,000 men and the Russian Main Army finally reached Frankfurt-an-der-Oder. Tchernichev's Corps consisted of:

On October 6, with Tchernichev and Lacy approaching Berlin, Prince Eugen retired to the other side of the city and encamped near the Landsberg Gate. Hülsen, who had now reached the vicinities of Berlin, detached 6 bns and all his cavalry to reinforce Prince Eugen. 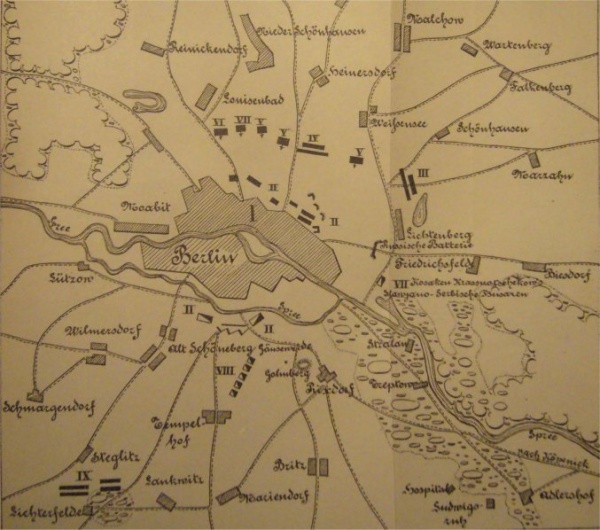 On October 7 in the morning, Hülsen marched by Saarmund and encamped near the Halle Gate. Tchernichev deployed in front of the positions of Prince Eugen and both armies cannonaded each other on the Heights of Lichtenberg, 6 km east of Berlin. The same day, Frederick left Silesia in a hurry to relieve his capital.

On October 8, Hülsen arrived in Berlin. The Prussian forces in the town now totalled 14,000 men. However, the combined forces of Lacy and Tchernichev totalled some 35,000 men. The same day, Tchernichev, who had received reinforcements (9 bns and 5 sqns), and Prince Eugen drew out their troops and manoeuvred about. A violent thunderstorm slowed down operations. Prince Eugen did not dare to attack the Austro-Russians.

During the night of October 8 to 9, Prince Eugen and Hülsen finally withdrew to Spandau. The cossacks engaged their rearguard and took several prisoners.

On Thursday October 9 at about 7:00 a.m., Tottleben came circling to the Halle Gate. Berlin capitulated and was delivered up to the Russians. The garrison (3 bns) became prisoners of war. The city had to pay a contribution of 1,5 million crowns and to give 200,000 crowns to the troops as a gratuity. Lacy arrived after the capitulation and strongly disagreed with its terms. His grenzer troops bent on housebreaking, street-robbery and insolent violence. Tottleben had to fire upon them a couple of times.

For three days, Lacy was as the evil genius of Berlin while Tottleben and his Russians showed excellent discipline. The cossacks were kept out beyond the walls.

Saxon and Austrian parties were occupying various palaces at Potsdam, Charlottenburg, Schönhausen and Friedrichsfeld. Some of these parties behaved well while other had a horrible conduct. In Charlottenburg, Saxon Graf Brühl Chevauxlegers smashed the furnitures, the doors, cut the pictures, maltreated people and overset Polignac's collection of antiques and classicalities. At Potsdam, on the other hand, Prince Esterházy, with perhaps Hungarians among his people, behaved like a very prince.

On Saturday October 11, news arrived in Berlin that Frederick was coming. That same evening, Lacy took the road, with extraordinary velocity to join the Reichsarmee in Torgau Country.

On the morning of Sunday October 12, Tchernichev and Tottleben too left Berlin, marching at the rate of 50 km a day. Meanwhile the Russian Main Army moved off from Frankfurt-an-Oder to a safer distance. Frederick was still five marches off. The Russian spoilings during the retreat were horrible.

On October 14, Tchenichev made a junction with the Russian Main Army who retired towards Drossen (present-day Ośno Lubuskie).

On October 15, while he still was at Groß Muckrow in Guben Country, Frederick first heard for certain that the Russians had occupied Berlin and had now left the town.

On October 17, Frederick marched to Lübben, 86 km straight south of Berlin, where he rested his army some days.

On October 19, Frederick, informed of the Siege of Cosel (present-day Koźle) in Silesia, which was threatened by Loudon, detached Goltz with 16 bns and 38 sqns to relieve the fortress.

The Russians took camp about Landsberg and the Wartha Country.

On October 20, Frederick left Lübben and marched to Dahme on his way to Torgau in Saxony. He had previously reinforced Goltz, at Glogau, to 20,000 men to protect Silesia. Frederick's Army then entered into Saxony (for details of its manoeuvres, see 1760 - Austrian campaign in Saxony).

Tottleben and his cossacks remained in Neumark and Pomerania, even launching raids in Ueckermark across the Oder.

At the end of October, General Werner arrived in the Ueckermark and forced Tottleben to retire to the right bank of the Oder.

On November 6, Buturlin arrived to take command of the Russian Army, replacing Saltykov who still had health problem. When he received the news of the Austrian defeat at Torgau, Buturlin considered that it would be impossible to spend winter in the ruined country around Landsberg and resolved to retire to bring back his army in Poland, leaving Tottleben in Eastern Pomerania with his light troops.

This article is essentially a compilation of texts from the following books which are now in the public domain: Anonymous: A Complete History of the Present War, from its Commencement in 1756, to the End of the Campaign, 1760, London, 1761, pp. 537-539