The 1760 operations on the coast of Coromandel opened with a decisive British victory at the battle of Wandewash on January 22. Throughout the year, Coote methodically took the various French occupied places, progressing steadily towards Pondicherry.

Lally, despite shameful disloyalty and opposition from the civil authorities, resolved to fight on to the end, trusting that d'Aché might come with his squadron to his relief; and his regular troops worked for him with a fidelity and devotion worthy of the best traditions of France. 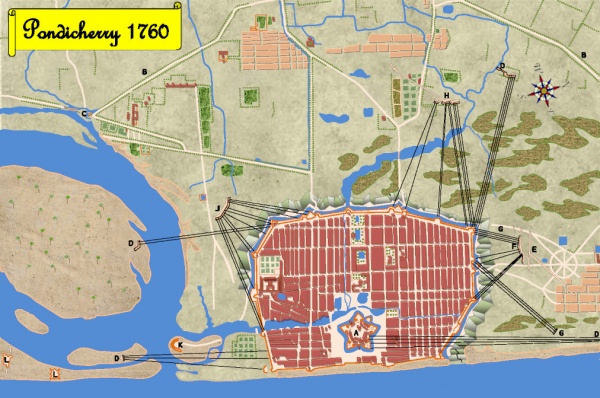 Map of the Siege of Pondicherry
Copyright: Dinos Antoniadis

A The Citadel or Fort Saint-Louis
B The road with the hedges
C Redoubts for the defence of the Hedge
D Batteries established at a distance for enfilading fire and for harassing the garrison, drawing their fire and concealing the preparations for a real attack, opened on December 8 at midnight
E The North Attack intended against the Northwest Bastion, begun on January 13 at night
F The Royal Battery of 11 guns, begun January 13 at night and finished on January 14, opened on January 15 with three mortars on the same places
G Part of the unfinished North Attack, the French having surrendered at discretion on January 16 in the morning
H THe Hanover Battery of 10 guns and three mortars to breach the West Face and enfilade the North Front
J Attack projected and traced out against the Southwest front, but not begun
K Fort Thomas attacked and taken on January 4 at night
L Redoubts to shut the communication on the South

In September 1760, the siege was about to begin when commisions arrived from Great Britain for major Monson who had been promoted colonel over Coote's head. The latter retired to Madras.

Monson determined to make a simultaneous night attack on all the redoubts at the 4 openings in the boundary hedge. The redoubt on the north was called Madras, on the west there were the Valdore redoubt and the Villanore redoubt, and on the south the Ariancopang (today Ariyankuppam) redoubt. All were strongly fortified and well garrisoned.

Assault on the redoubts

During the night of September ??, the British force was formed in 2 columns:

Monson's column pushed on, but having a considerable distance to march and the rear having lost its way, there was some little delay. The head of Monson's column having been brought on a road enfiladed by French guns, a single discharge of grape from an 18-pdr killed 18 men and wounded 36 others, including colonel Monson shot through the thigh. Nevertheless, the first column rushed on to the attack and, after several repulses, the Valdore redoubt was finally carried.

Smith's column had been discovered before Monson's and had been fired upon at a village in front of Oulgarry, occupied in force by the French. After a determined resistance, the British grenadiers in a bayonet conflict cleared the village. The British troops then entered through the embrasures in the works and carried them in gallant style, driving out Lally Infanterie and Lorraine Infanterie, taking nearly 100 prisoners and capturing 10 pieces of cannon. On this occasion, ensign Cosby served with the 1st Grenadier Company of the Madras European Regiment and distinguished himself.

The 2 French regiments, after their defeat, drew up in front of the Villenore redoubt but, hearing the the fire of Monson's column on their flank and being pressed by Smith's column, they retired in such haste and confusion that they din not attempt to reinforce the redoubt. The guard of the Villenore redoubt, taking alarm after discharging their guns, abandoned it and retired with the 2 French regiments to the glacis of the fort.

The Bataillon des Indes continued in possession of the works of Ariancopang which had only been threatened by the cavalry.

In this action, the British lost 115 men killed or wounded. Monson's column suffered most, more particularly his grenadiers who had 2 officers killed.

Durin the night, the French made a determined attempt to retake these posts but were repulsed with much loss by the Bombay detachment.

On September 20, Coote arrived in the British camp to assume command in place of colonel Monson. He immediately had all the gorges of the captured redoubts secured.

On September 23, Coote fortified a mound to the north of the town, opposite Madras redoubt. It was occupied by 200 Europeans and a company of pioneers.

On September 27, Coote reconnoitred towards Ariancopang. On his approach with his usual escort, the French abandoned Ariancopang and a small party of the Madras European Regiment and some Indians under the command of ensign Cosby instantly took possession of the redoubt.

On September 28, 400 men of Lorraine Infanterie with 2 field-pieces advanced from the glacis to recover Ariancopang but their various attempts were repulsed with a loss of many men killed and 20 wounded. Ensign Cosby held the command of this important redoubt during the remaining operations.

On September 30, the French began to demolish the village of Blanchière to deny the British a solid stronghold in case the Madras redoubt would fall. The same day, Coote made a reconnaissance towards Blanchière and, having advanced along the north beach, he penetrated through an unguarded opening and gained the rear of the entrenchments. He immediately formed his detachment into 2 parties: one attacked the Madras redoubt frontally whilst the other proceeded along the inside of the works and took all the different posts in reverse. After a short resistance, the French abandoned the Madras redoubt and took post in Blanchières in its rear. The redoubt was instantly occupied by the British Sepoys.

During the night of September 30 to October 1, whilst the company of British pioneers was fortifying the Madras redoubt, 400 men of the Bataillon des Indes and 600 Sepoys attacked the redoubt and drove the British out of it, the officer of the pioneers being killed in the action. However, an Indian officer named Covin Singh rallied his men and led them to the attack of the redoubt. They gained a footing inside the work and kept up a well directed fire. The French began to retire. A detachment consisting of picked soldiers of each British battalion came timely to their support and secured the redoubt.

The capture of the Madras redoubt completed the investement of Pondicherry from sea, on the north, all round on the land side to the river of Ariancopang on the south-west. Between the Ariancopang redoubt and the seashore to the south there remained an opening, secured by a redoubt called Saint-Thomas on a small sand island in the river about 500 meters due south of the fortifications of Pondicherry.

In October the boats of the British squadrons, under commander William Newsom, acting captain of the Southsea Castle (44) and lieutenant Isaac Florimond Ourry, brilliantly cut out from under the forts the Hermione (36) and Baleine (32) which were afterwards purchased into the British Navy. This month was employed by Coote's army in erecting batteries.

On October 23, the rainy season approaching, rear-admiral Stevens left 5 ships of the line, under captain Robert Haldane, of the America (60) to continue the blockade and himself sailed for Trincomalee.

On November 8, 4 batteries opened on Pondicherry: one to the north, at about 1,500 meters distance, enfiladed the east face of the works; another of 2 x 24-pdrs and 3 mortars was situated towards the west and bore upon the nort-west angle; one, to the south on the edge of the large island formed by the river, fired on the south-west angle of the fort and on Saint-Thomas redoubt; and one to the south, erected on another island and firing in the same direction.

On November 12, the French abandoned the Saint-Thomas redoubt which was immediately occupied by a detachment including soldiers of the Madras European Regiment.

On November 13, the gorge of the Saint-Thomas redoubt was secured and transformed into a battery firing on the south face of the fortifications.

The British then continued the investment of Pondicherry with the greatest vigour.

On December 25, Stevens returned with 4 of his ships of the line and resumed command off the port.

On January 1, 1761, a violent hurricane burst over the city and harbour. Stevens, whose flag was in the Norfolk (74) of captain Richard Kempenfelt, cut his cable, and by gun-signals ordered his captains to do the same; but, owing to the violence of the gale and the amount of spray in the air, the signals were neither heard nor seen. The Panther (60) of captain Philip Affleck, the America (60) of captain Robert Haldane, the Medway (60) of captain John Bladon Tinker, and the Falmouth (50) of captain William Brereton, were dismasted, yet managed to ride out the storm. A worse fate overtook the Newcastle (50) of captain Digby Dent, the Queenborough (20), and the Protector fireship, all of which drove ashore and were wrecked about 3 km from Pondicherry, though they lost only seven of their crews. Other vessels were even more unfortunate. The Duc d'Aquitaine (64) of captain Sir William Hewitt, the Sunderland (60) of captain James Colville, and the Drake, storeship, foundered with all hands, except 7 Europeans and 7 lascars. The total sacrifice of life was about 1,100 souls. This hurricane ruined all the works of the besiegers.

The inundations which followed was so extensive that the French were only able to recover the Saint-Thomas redoubt.

On January 3, Stevens resumed his position and renewed the blockade.

On January 4, Stevens was joined by rear-admiral Cornish with additional ships from Trincomalee. Since d'Aché did not show up with the French squadron, the British works were repaired and pushed forward.

On January 7, a British detachment, headed by part of the Madras European Regiment, attacked and recaptured the Saint-Thomas redoubt.

During the night of January 7 to 8, all the grenadiers of the French garrison recaptured the Saint-Thomas redoubt, overpowering and taking prisoners the small guard left in it. The provisions of the French rapidly running out, Lally decided to return these prisoners who he could not feed.

On January 10, a large battery, named the Hanover, opened against the west face of the fort.

On the night of January 13, 700 Europeans, draughted from every corps in the force, assembled at the village of Blanchière and before daybreak had not only constructed a battery within 450 meters of the town but 2 long parallels.

On January 14, the Hanover battery silenced the fire of the west face.

On January 15, a new battery was marked out near the north beach and within 300 meters of the walls. In the afternoon, the French garrison of Pondicherry, being on the brink of starvation, surrendered.

On January 16, the grenadiers of the British European battalions occupied the different gates of Pondicherry. On the afternoon of the same day, the French garrison paraded in front of the citadel for colonel Coote's inspection: only 1,100 Europeans appeared under arms and these were worn down from famine, fatigue and disease. The most impaired and enfeebled were the grenadiers of Lorraine Infanterie and Lally Infanterie, the finest body of French troops that had ever landed in India. During the entire period of their service in India and during the distress of the siege, not a man had deserted. Their condict on all occasions had been distinguished by the most devoted gallantry. After the review, the French troops grounded their arms and became prisoners of war.

The European military prisoners, of all ranks, were 2,072 and 381 civilians. In the arsenal and on the works were 500 excellent cannon and 100 mortars besides an ample supply of ammunition of all sorts and a great number of fire arms.

During the siege, the British lost 32 officers and 500 rank and file killed or wounded.