On February 9 1761, Ferdinand of Brunswick launched an offensive in Hesse hoping to reconquer this country while the French were dispersed in their winter-quarters. On his extreme left, Spörcken advanced against the isolated Saxon corps stationed in the area of Langensalza (present-day Bad Langensalza). Frederick II had also detached a corps (7,000 men) under the command of General Syburg to assist Spörcken in his enterprise against the Saxons. 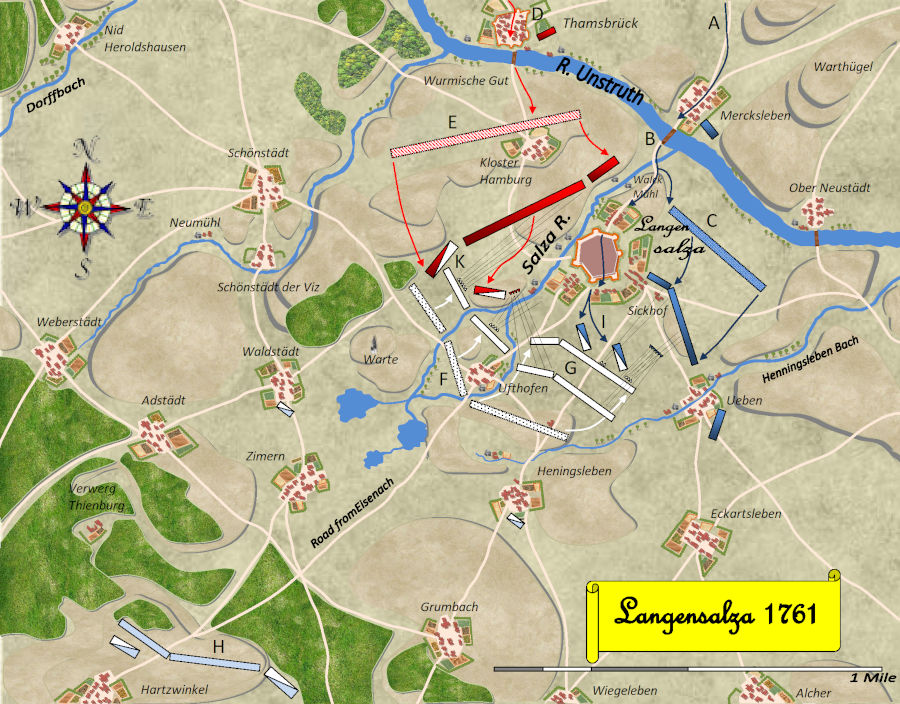 Map of the Combat of Langensalza fought on February 15, 1761 - Copyright Dinos Antoniadis

On February 15 before daybreak, the Comte de Solms at the head of Prinz Friedrich August Infantry took position on a height to the left of Langensalza on the road between Thamsbrück and Schönstedt. A battalion of Saxon Converged Grenadiers already occupied the position. They were soon reinforced by Prinz Xaver Infantry.

At 7:00 a.m., all Allied and Prussian troops came to the Unstrut River bank to pass it, but the thaw had so increased the waters that the banks were flooded from Mühlhausen almost to Langensalza. The Prussian cavalry got through the passage of Merxleben while their cannon were battering the town of Langensalza. Spörcken sent 8 sqns of his first line across the Unstrut at Thamsbrück with a brigade of chasseurs and a squadron of Luckner Hussars whose whole corps could not pass, the waters continuing out all day.

At 7:30 a.m., Prinz Joseph Infantry and Prinz Maximilian Infantry joined the Saxon force assembled under the Comte de Solms on the height near Langensalza. The Prussians appeared almost simultaneously, debouching in 4 columns and deploying in order of battle in 2 lines on the heights of Merxleben. The Comte de Solms immediately sent a messenger to Mühlhausen and another officer to ask Prinz Anton Infantry to force march to join him as soon as possible. However, the latter officer could not reach Prinz Anton Infantry because enemy hussars and jägers had already taken position between de Solms' Corps and Prinz Anton Infantry.

Major von Falkenberg at the head of one squadron of Alt Bremer Cavalry delayed the Saxon Prinz Anton Infantry for more than two hours till the arrival of Lieutenant-General Reden followed by his regiment: (Reden Dragoons).

At about 7:45 a.m., Stainville arrived and deployed his force in order of battle on the slopes behind the Judenberg; his dragoons on the right in a prairie, his left towards Langensalza, and the Judenberg occupied by some cannon and infantry piquets.

At 8:00 a.m., the 10 hussars sent by the Comte de Solms to reconnoitre the banks of the Unstrut near Thamsbrück fired to signal that they had located the Allies. Shortly after, Allied cavalry and jägers were seen forming on a height near Thamsbrück. They were soon joined by other cavalry and by 8:15 a.m., 8 Allied squadrons and 2 jägers battalions were deployed in order of battle on this height.

At 8:15 a.m., the Prussian right formed in column and debouched by the bridge of Merxleben, halting as soon as it reached it. The Prussian left was deployed near Nägelstedt. The Prussians then began to cannonade Stainville's positions with the battery planted the previous day near Merxleben.

With the Allied cavalry now deployed in order of battle on the left of Solms' Corps, the latter was redeployed with its right to the road leading to Schönstedt; and the Prinz Maximilian Infantry and Prinz Joseph Infantry en potence to protect the exposed Saxon left flank.

The Comte de Solms retreated by his centre, staying behind with his grenadiers to cover his retreat. The Chevalier d'Orb, captain at Royal-Nassau Hussards, offered his services to guide the retreating force through the ravine which had been made even more impracticable by the thaw and continuous rain. But instead of leading the column by Uffhofen as planned, he directed it on Zimmern. The Comte the Solms realised too late the mistake made by the Chevalier d'Orb, the Hanoverian cavalry was already reaching Zimmern to attack his flank. The Saxon infantry was forced to pass the Salza with water at knee height and the Saxon artillery had mush difficulties to pass the stream. This delay gave enough time to Lieutenant-General Hodenberg to march through the village of Zimmern and to arrive on the right flank of the retreating Saxons. In the mean time, the Prussian cavalry debouched from Langensalza, threatening the left of the Saxons.

The 8 Allied squadrons under Hodenberg had already passed the village of Zimmern and marched on Prinz Friedrich August Infantry, the first Saxon unit to pass the ravine. The Saxon cannon were located so low that they could not fire at the Allied cavalry. The rest of the Saxon corps managed to pass the ravine and most of it took refuge in a wood sheltered from the enemy cavalry.

However, the Allied cavalry attacked the two Saxon regiments forming the end of the column: Prinz Joseph Infantry and Prinz Maximilian Infantry. The Allies charged them with 6 squadrons, isolating a division of Prinz Joseph Infantry and the entire battalion of Prinz Maximilian Infantry. Then, 4 Allied squadrons surrounded these isolated Saxon units who received them with a general salvo and at the point of the bayonet. During the engagement, 2 Allied squadrons managed to turn the rear of these units.

Lieutenant-General Hodenberg attacked a Saxon regiment who had formed a square. He was wounded during the ensuing engagement.

The Saxons were on the point of being completely surrounded when La Ferronnaye Dragons arrived to the rescue. Without taking time to form properly, they charged the Allied cavalry, driving it back and capturing Lieutenant-General Hodenberg, 1 standard, 3 officers and about 60 troopers. After the intervention of the French dragoons, the Saxons managed to reach Eisenach, not without loosing many exhausted prisoners to the hussars who were following them in the distance.

Near Eisenach, the Saxons made a junction with Stainville's Corps. The head of the column reaching the place at 7:00 p.m. while the tail of the column arrived only on February 16 at 10:00 a.m.

After the action, the Allied and Prussian troops being greatly fatigued, Syburg cantoned his corps at Langensalza and Spörcken's Corps re-entered its former quarters on the left of the Unstrut, except Luckner's body which remained at Mülverstedt and Schönstedt.

Spörcken lost about 100 men and Lieutenant-General Hodenberg was wounded and taken prisoner.

The Prussians took 3 bns and 7 pieces and Spörcken's troops took 2 bns and 6 pieces.

Overall, the Saxons lost 2,000 men (including Colonel Carlsburg commanding the grenadiers) taken prisoners before managing to make a junction with Stainville's Corps near Eisenach. They also lost some 300 men dead and wounded.

Since the departure of Prince Xavier of Saxony for Paris on February 7, the Reserve of the Army of the Upper Rhine was under the command of the Marquis de Saint-Pern. Hereafter, we list the entire reserve although only a part of it took part in the action.