After capturing the redoubts on the hill near Przećmin (unidentified location) and having pursued the Prussians up to Sellnow (actual Zieleniewo), Rumyantsev left there brigadier Brandt with 4 battalions , 8 squadrons of dragoons and 2 pulks of cossacks there. Brandt's orders were to blockade the Prussian forces in their camp on the left bank of the Persante river (actual Parsęta river). Furthermore, prince Dolgoruki could rapidly support Brandt with 4 additional battalions in case of attack and was in a position to cover the bridges leading to the right bank of the Persante.

On October 21 at 8:00 pm, a Russian corps reached Treptow (actual Trzebiatów), marching by Triebs and Gummin. This corps consisted of 4 battalions and 10 squadrons (see order of battle for details).

Meanwhile another Russian force arrived from the side of Gabin. It consisted of 1 battalion and 4 squadrons (see order of battle for details).

On October 23 at 4:00 am, Rumyantsev personally arrived at Treptow with further reinforcements of 3 battalions, 6 squadrons, 500 cossacks and field artillery (see order of battle for details).

The Prussian garrison of Treptow, under the command of general Knobloch, consisted of 3 battalions and 2 squadrons with some sick and wounded quartered in the town (see order of battle for details). 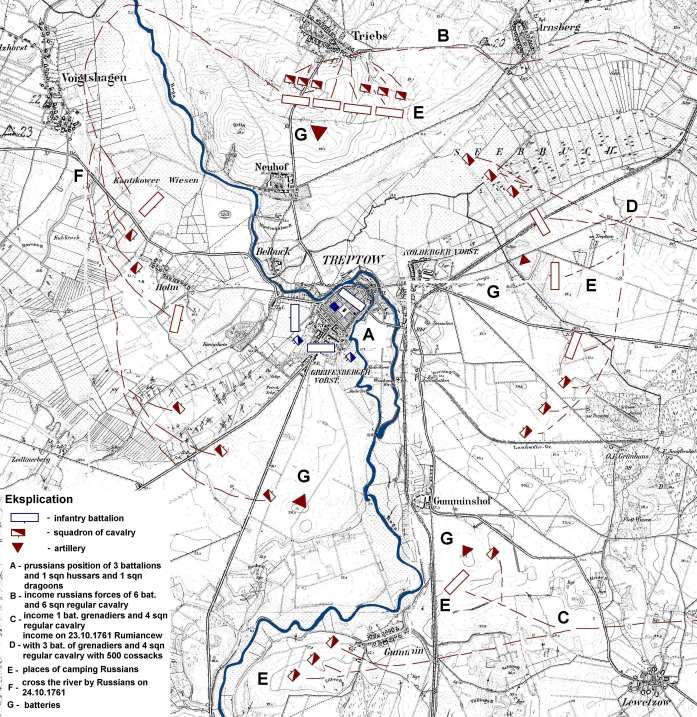 Map of the siege of Treptow - Source: Tomasz Karpiński

Treptow was surrounded by walls and, on 3 sides, by the Rega river. The town was connected to the right bank of this river by 3 bridges which had been strengthened with barricades by the Prussians, thus preventing the Russians to use them to cross on the left bank.

Rumyantsev reconnoitred the town with an escort of light cavalry. He then decided to plant 3 batteries and to bombard the town. Furthermore, he ordered to use the buildings of the suburb to build wooden bridges and to besiege the town from the road leading to Greiffenberg (actual Gryfice).

The Russian artillery opened on the town and burnt most of its houses while the troops were preparing to storm the place.

On October 24, a Prussian envoy was sent to Rumyantsev, proposing to surrender the town if the Prussian troops were allowed to freely leave the place. Indeed, the Prussian garrison was running short of provisions and ammunition. Rumyantsev declined the proposal and intensified the bombardment of the town.

The Russians took 1 general, 7 senior officers, 52 officers, 86 NCOs, 1602 privates and musicians, 32 artillerymen and 201 cavalrymen as prisoners of war and captured 6 guns, 2 howitzers, 15 colours and 258 horses (from the cavalry and artillery). In addition, several sick and wounded were made prisoners (53 NCOs and 366 privates).

During these operations, Szetniev's unit of horse grenadiers and 5 companies of grenadiers under the command of Renenkampf guarded the road to Greiffenberg. General Panin was also approaching with 2 regiment of cossacks, 2 regiments of dragoons, 8 battalions of infantry, 2 Shuvalov secret howitzers and 1 heavy gun.

When Buturlin was informed of the capture of Treptow, he decided to leave a strong garrison in the town. He also gave orders to general Berg to seize the bridges at Gollnow (actual Goleniów) with 2 regiments of infantry and all his cavalry. Rumyantsev for his part held the bridge at Körlin (actual Karlino) and sent back Nizegorodskiy Dragoons under the command of Dwilke to cover the line of communication with Posen (actual Poznań) with the support of the Makedonskiy Hussars and the Maszlikin and Malorussian cossacks.

Initial Russian arriving from the side of Gabin:

Tomasz Karpiński (student at the Institute of History, University of Adam Mickiewicz in Poznań, Poland) for the initial version of this article.