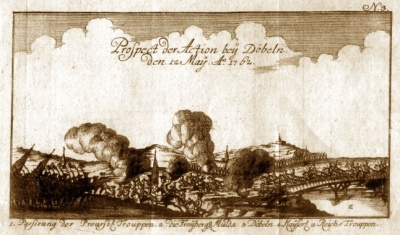 Contemporary illustration of the Combat of Doebeln - Source: reproduced with the kind authorisation of Ralph Gundram, Copyright Ralph Gundram

Throughout winter 1761-62, prince Henri had repeatedly asked Frederick II for reinforcements but had met only with rebuttals. Finally, prince Henri asked to be relieved from his command and replaced by Seydlitz. King Frederick refused his request.

In mid April, the Reichsarmee quitted its winter quarters and marched to make a junction with the Austrian army encamped near Dresden. Austrian generals Kleefeld and Luzinski were still quartered at Zeitz and Pegau.

With the end of the conflict with Sweden in North Germany, some Prussian troops soon joined prince Henri in Saxony. Indeed, the prince's army had to contain a much larger Austro-Imperial army (45,000 Austrians and 19,000 men from the Reichsarmee). He had his headquarters in Hof in Voigtland and was in a difficult position requiring great prudence. His army consisted of some 30,000 men with a large quantity of inexperienced and unwilling Saxon recruits and a large quantity of unreliable Freikorps.

At the beginning of May, prince Stolberg reached the region of Penig and Chemnitz with the main Austro-Imperial army. A few battalions remained in Freiberg with Serbelloni's corps.

By May 5, prince Henri had reached Oschatz, 23 km north of Döbeln. 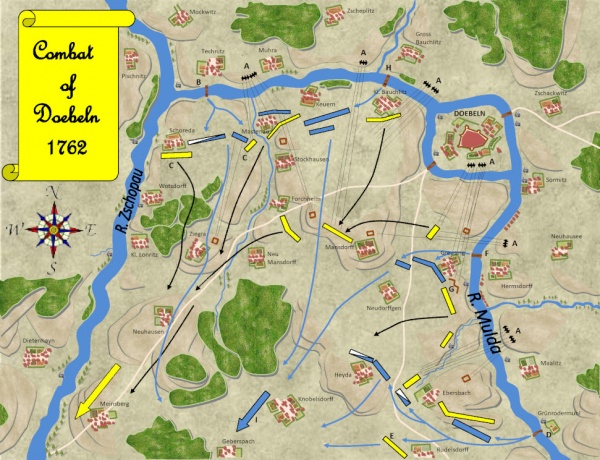 Map of the Combat of Doebeln - Copyright Dinos Antoniadis

After the Prussians decided to force the crossing of the Mulde, the batteries A were deployed unnoticed to assist the crossing.
At B General Seydlitz passed the ford and compelled the troops found at C to retreat.
At D Colonel Kleist passed the Mulde at the same time and came with his troops behind the enemies and made many prisoners at E.
At F the General Alt-Stutterheim passed and destroyed the redoubts at G.
At H General Kanitz crossed a hastily built bridge.

Meanwhile, the Austrian army remained motionless in its initial positions which had been strengthened during the previous winter. The advanced left wing was particularly strong. General von Zettwitz commanded in this area, having about 4,000 men encamped to the south of Döbeln in the angle formed by the courses of the Zschopau and the Freiberger Mulde.

Zedtwitz was so sure that the Prussians would not attack his strong positions that he usually left the entrenchments and redoubts strongly guarded only at night. During the day, he left only a few picquets to guard his defences. Zedtwitz's carelessness incited prince Henri to plan an attack on the Austrian left wing before the junction with the Reichsarmee could be effected.

On the afternoon of May 11, the Prussian troops took position to their assigned posts for the planned attack.

During the night of May 11 to 12, Prussian Jägers overpowered an outpost manned by 50 Grenzers near Niederstriegis 6km south of Döbeln.

On May 12, at 5:00 AM as usual general Zedtwitz issued the orders to his troops to return to their quarters at 7:00 AM.

At 7:00 AM, prince Henri gave the signal to attack. His army advanced in 4 columns towards the Mulde, above and below Döbeln. The rightmost column under the command of general Seydlitz started from a position between Mockritz and Zschörnewitz (6 km north of Döbeln), then came Kanitz's column at Gadewitz and Alt-Stutterheim's column at Sörmitz (1 km south of Döbeln). These 3 column were to make a frontal assault on the Austrian positions while the leftmost column under Kleist started from Kobelsdorf and Naußlitz and marched against Zedtwitz's right flank.

The Prussian manoeuvre remained unnoticed until their columns bumped into the outposts of the Austrian left wing who opened fire on them.

Before Zedtwitz had time to assemble his troops, colonel Kleist passed the river, surrounded the nearest battalion Clerici Infantry and took it prisoners along with general Zedtwitz himself. Meanwhile, the other Prussian columns had soon crossed the Freiberger Mulde, stormed the entrenchments without encountering significant resistance and forced the Austrians out of their quarters everywhere.

Around 9:00 AM, prince Henri assembled his army at Knobelsdorf.

Attacked by surprise and surrounded, Zedtwitz lost more than half of his force, including about 1,500 taken prisoners. The Prussians lost no more than 63 men.

The remnants of his force fled southwards, in the direction of Freiberg.

For his conduct during this action, Kleist was promoted major-general.

This article incorporates translated texts from the following book which is now in the public domain: